It’s another wonderful case of Elon Musk telling the world “do as I say, not as I do”…

Emboldened by the success of Tesla’s Gigafactory 3 in Shanghai (i.e. it caused a short squeeze in the stock), the company is now pushing non-stop to get its Gigafactory 4, which will be located in Gruenheide, outside of Berlin, Germany, up and running.

The company is taking a direct swipe at major German auto manufacturers like BMW and Volkswagen with the decision to put its factory in Germany.

Juergen Pieper, a Frankfurt-based analyst with Bankhaus Metzler said: “Elon Musk is going where his strongest competitors are, right into the heart of the global auto industry. No other foreign carmaker has done that in decades given Germany’s high wages, powerful unions and high taxes.”

The plant is slated to include a pressing plant, paint shop and seat manufacturing in a building that will be 2,440 feet long. Musk announced the news that the plant would be coming to Germany at a ceremony in Berlin last November. 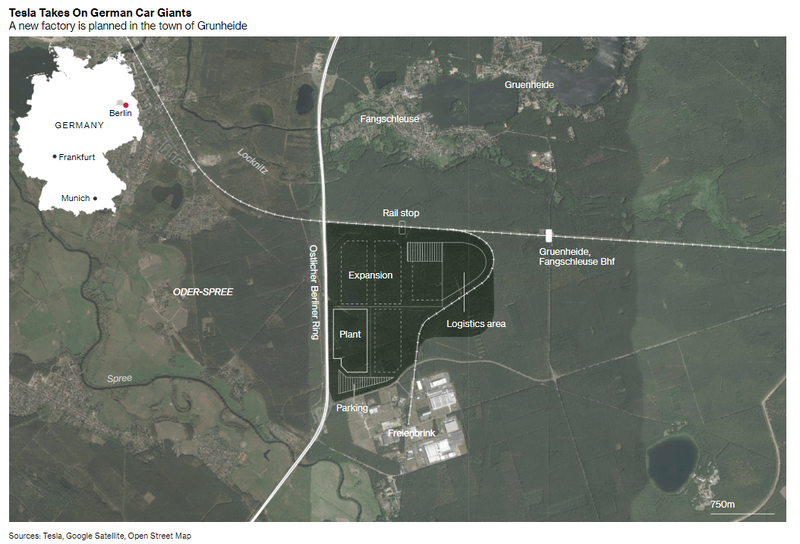 Local Mayor Arne Christiani told Bloomberg: “It gives young people with a good education or a university degree the possibility to stay in our region—an option that didn’t exist in past years.”

The “investment” in the area has turned the town of 8,700 people into a major attraction, with proposals for U.S. style shopping malls and apartment buildings coming across the desk of local officials every day. Many people hope that the factory will help the area develop things like public transit.

Ask Tesla’s Buffalo factory how that worked out for them.

However, in a strange twist of irony, to build the factory Tesla needs to clear “thousands of trees”.

So much for saving the environment…

In fact, the company has to clear so much forest space to put up its factory that dozens of protesters recently organized a gathering known as a “Forest Walk” to protect against Tesla’s tree removal activities at the site, according to Teslarati.

The protesters were dressed in yellow vests, replicating the “Yellow Vest Movement” in France and are also concerned about what the deforestation may do to the drinking water in the area.

Some members of the group said they would return the following week and that they may begin to take legal action against the company.

“We will also raise objections to Tesla’s environmental impact assessment in the normal legal way,” one protester said.

Group spokesperson Nadine Rothmaier said: “I think every citizen here has his own topic. For some, it is nature and the forest or people. The factory will also emit pollutants that pollute the region.”

Tesla says it has to relocate numerous species of animals in the area to avoid harming them. The company “plans to accelerate the initial deforestation activities in the area so as not to interrupt bird breeding that begins in early March” and says it intends on replacing the trees it cuts down.

We won’t hold our breath waiting for that.

By Tyler Durden of Zero Hedge.


Source: https://www.wakingtimes.com/2020/01/23/tesla-is-cutting-down-thousands-of-trees-to-put-up-its-german-gigafactory-4/
BeforeItsNews Announcements
Step 1: Get the Telegram App & Get Stories Direct to Your Phone or Computer Without Censorship! Get the Telegram App in the App Store or at
https://telegram.org/