Mention a dystopia to most people and they’ll probably think of Nineteen Eighty-Four, the Thought Police and Big Brother. That’s understandable, because there are worrying hints of it in our own society – are ideas like no-platforming, safe spaces and misgendering really so different from wrong-thinking and thought-crime? – but there’s a different kind of dystopia that’s a lot more common. Unfortunately it’s just as scary.

The word dystopia itself just means a society that’s unpleasant or frightening. That can mean a brutal, highly centralized authoritarian state like the one ruled by Big Brother’s Party (Orwell modeled it on the Soviet Union under Stalin) – but it can also mean a society where the rule of law has broken down (WROL – without the rule of law), and that’s a lot more common in the world today. For every North Korea there are half a dozen collapsed societies like Somalia or Pakistan. And, while it’s difficult to impose a one-party state and organize things to the point where you have absolute control over what people do and even think, it’s easy for a society to collapse. A natural disaster can do it – think New Orleans after Hurricane Katrina.

Of course, that didn’t last; New Orleans is one city in a big, advanced country and the rule of law was quickly restored. But what if the government was weaker, or society was less stable to begin with? Or what if it isn’t one single event that causes the collapse, but years of neglect? Many countries are a disputed election or an economic crisis away from collapse – and there are even parts of the USA where the rule of law is too fragile to be taken for granted.

If there’s one thing guaranteed to reduce a society to chaos, more or less instantly, it’s a sudden absence of cops. It doesn’t matter what kind of society it was to start with. For example, Canada is famously peaceful and friendly. What happened when the cops walked out? Nothing good:

“As a young teenager in proudly peaceable Canada during the romantic 1960s, I was a true believer in Bakunin’s anarchism. I laughed off my parents’ argument that if the government ever laid down its arms all hell would break loose. Our competing predictions were put to the test at 8:00 A.M. on October 17, 1969, when the Montreal police went on strike. By 11:20 A.M. the first bank was robbed. By noon most downtown stores had closed because of looting. Within a few more hours, taxi drivers burned down the garage of a limousine service that competed with them for airport customers, a rooftop sniper killed a provincial police officer, rioters broke into several hotels and restaurants, and a doctor slew a burglar in his suburban home. By the end of the day, six banks had been robbed, a hundred shops had been looted, twelve fires had been set, forty carloads of storefront glass had been broken, and three million dollars in property damage had been inflicted, before city authorities had to call in the army and, of course, the Mounties to restore order.” 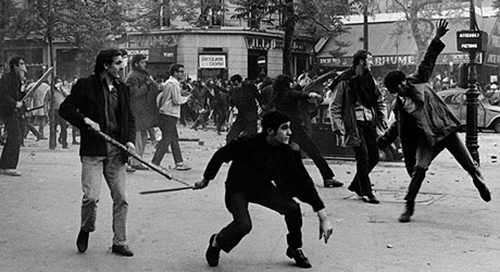 Unfortunately, police strikes are more likely than they’ve ever been, especially in the USA. Cops are under a lot of strain, and the media are against them right now. What happens if there’s an officer involved shooting, and under pressure from the media and far-left activists like BLM the officer is arrested? Is it that hard to believe the police could snap and walk out? And as soon as criminals realize the cops have gone home all hell would break loose.

In Montreal in 1969, the main problem was simple crime. Now there are political extremists to worry about, too. “Anti-fascist” protesters like Black Bloc are saying it’s acceptable to use violence against Nazis, and their definition of “Nazi” includes pretty much anyone right of Bernie Sanders. If you have a Trump 2016 bumper sticker, and suddenly the law isn’t being enforced, there are people out there who’ll take the chance to have a go at you – and your car, and your home, and maybe your family too. They’ll see this as the perfect chance to get revenge for all the imaginary wrongs you’ve done them, and maybe “redistribute” your property to “the people” – meaning themselves.

So, what can you do if law and order suddenly disappears and your area becomes a free for all?

What you can’t do is tool up and go on a mission to clear the streets of crime. There’s a good chance the law will be re-imposed at some point and people will be called to account for what they’ve done – and, as a law-abiding citizen, you’re more likely to get caught up in that net than someone from a gang or a far-left group.

What you need to do is take steps to protect yourself and everything that matters to you, but make sure that you can justify them later. That means your aim is to avoid confronting the lawless elements, but be ready to defend yourself if a confrontation is forced on you.

The first thing is try to blend in. If you and your home don’t stand out you’ll attract a lot less attention, and that can be all it takes to avoid being attacked. If there are leftist mobs rioting in the streets they’re going to focus on any home that looks like conservatives live there, so at the first hints of trouble you should do an outside check to make sure you aren’t being conspicuous. It might be tempting to make a visible show of support for the cops, president or whatever, but is that worth the risk of attracting attacks?

Another good way to avoid confrontations is to just stay at home as much as possible while the crisis is going on. This is one of the best arguments for being a prepper – you should already have the food supplies and other resources you need for this. If you don’t, now is a good time to start. There’s no point leaving it until a crisis is developing, because the stores will be full of people panic buying. Joining the last-minute shopping frenzy is actually a good way to get into trouble, because tempers will be flaring and you can expect outbreaks of violence as people fight over the last stocks of food. You’re much better off sitting that out in a well-stocked home.

The same applies to all the other essentials of life. If you already have medical supplies and plenty of ammo at home, you can fall back on those reserves and avoid the disintegrating outside world. If you have a generator and a water source you won’t need to worry about failing utilities (but keep the generator inconspicuous).

In the worst case, though, you’re going to have to defend yourself. Don’t trust to luck on this; be prepared. Firstly, plan things out. Decide on a safe room for your family in the event of a home invasion or a riot outside. The best option for this is a room with solid walls and only one way in – a room at the end of a corridor is ideal, because you can cover the approaches. Clear the corridor of any heavy furniture that attackers can use as cover. Also try to choose a room that has one way in but an extra way out – for example a second-floor room with a rope ladder fixed below the window. If attackers set fire to your home that gives you a quick escape route.

Stay aware of what’s happening in your home. Keep the family together as much as you can, and do regular security checks to make sure windows and doors are secure – especially if you have kids.

#4 Carry A Gun At All Times

When rule of law has gone carry a firearm everywhere – even if you’re just going to the restroom. If a mob breaks down the front door you don’t have time to go pick up the handgun you left in the kitchen, so it needs to stay on your belt. If you need to go outside, carry at all times – but not openly. That will just mark you out as a target. Have a concealed handgun on you, and a long gun hidden but easily accessible in your car – under a jacket on the floor works.

#5 Comply With The Rules

Even though the rule of law has broken down, try to keep within the rules as much as you can. That could make your life a lot easier when order is restored. If your home was attacked and you used deadly force to defend it, that shouldn’t cause you much trouble – but forming a posse and hunting down the bad guys might be a bit harder to explain.

Like most disasters, civil disorder is easier to survive if you’re ready for it. For most preppers this shouldn’t be a huge challenge. Just be prepared to fall back on your own resources, keep your head down and wait it out.

Preparedness Hacks: Once a nuke is heading your way, you might think that there isn’t much left to do, but you would be wrong!

Because we will show you America’s natural nuclear bunkers that are also EMP proof. When the sirens start wailing, all you need to do is pick the closest one to your home, where you can take cover before it hits.