Sometimes I re-read the headlines I find myself writing and I’m stunned by their absurdity. On the other hand, one can never be fully surprised by anything when dealing with the dark side of the entertainment industry. Because a lot of people in that industry are into very sick stuff.

Azealia Banks is a rapper but she’s mostly known for beefing with people on Twitter. She’s also known for posting disturbing stuff on Instagram.

On January 12th, Banks posted a (now deleted) story on Instagram where she dug up her dead cat named Lucifer (of course) and boiled it in her kitchen to “bring her back to life”. 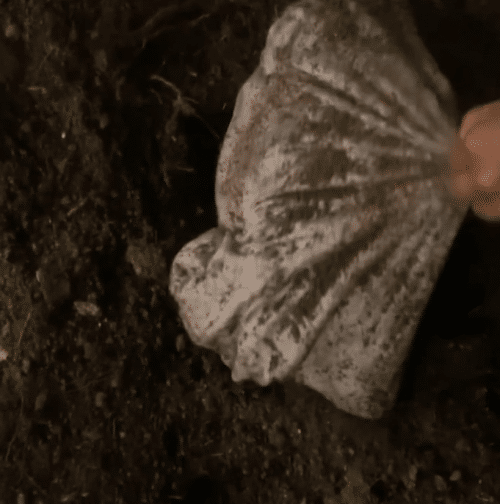 An unknown person digs up the cat while Azealia laughs and raps “the cat is in the bag”! 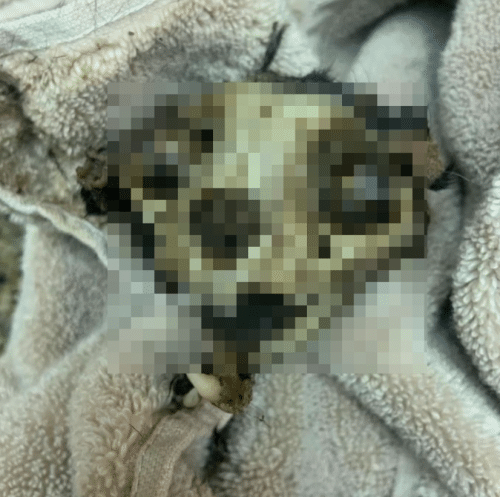 She also posted pictures of her dead cat. 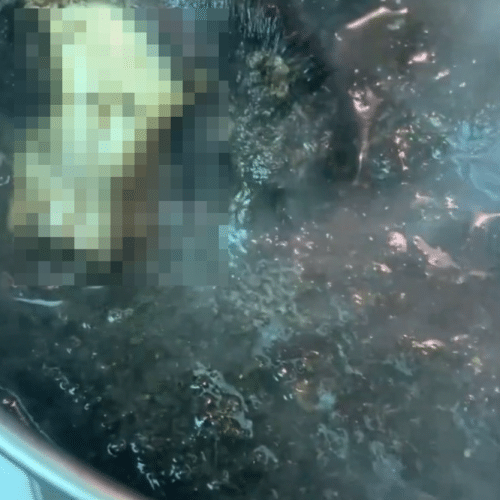 Then, Banks proceeded to boil the cat in a large pot. I won’t be eating at her place anytime soon.

A few hours later, Banks posted a picture of what looks like the cat’s skull surrounded by other items used for witchcraft. 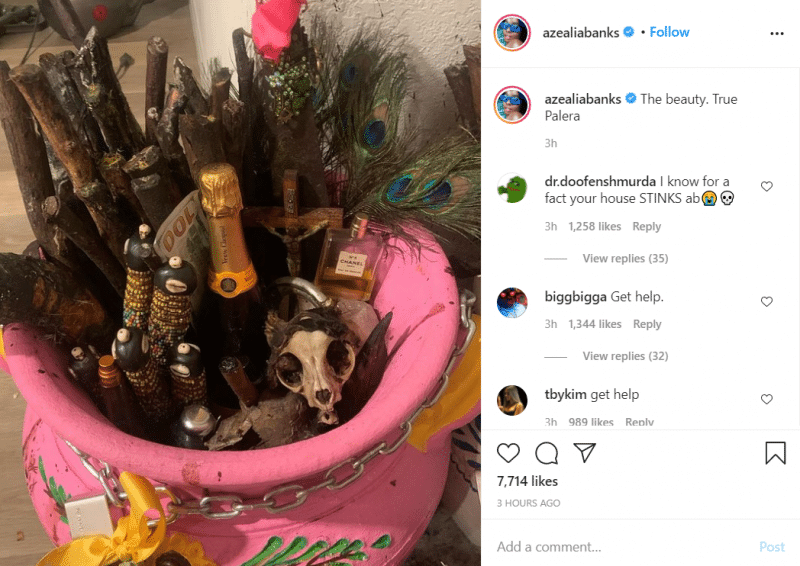 That picture was deleted as well.

Understandably enough, Azealia’s fans were horrified by her posts and some urged her to get psychiatric help. However, none of this is new or out of character for her. She’s been into witchcraft and general satanism for years.

My first article about Azealia Banks dates back to 2013 when she released her first video Yung Rapunzel. The entire thing was replete with occult symbolism and overt Illuminati stuff.

A screenshot from Yung Rapunxel featuring an all-seeing eye over a triangle while owls fly around her. She really wanted to be an Illuminati pawn. 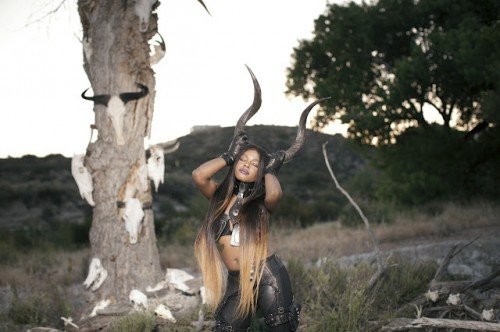 A screenshot from her video Liquorice. It sums up everything.

In 2016, Banks posted on Instagram videos of her cleaning a closet inside her house after “three years of sacrificing chickens”. 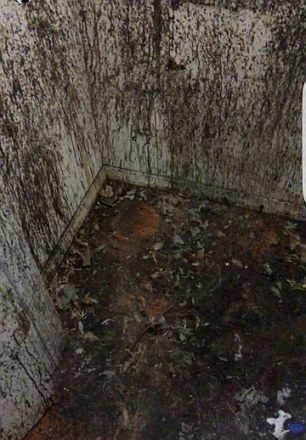 The caption was: “Real witches do real things”.

Here’s a quick recap of that disturbing episode.

In December 2016, Banks posted a series of videos on Instagram detailing her cleanup of a closet in her apartment where she claims to have been practicing witchcraft. She admitted to practicing “three years worth of brujeria”. The video appears to show dried blood, feathers, and the carrion of dead chickens. She was criticized on Twitter by the artist Sia, who stated that “sacrificing animals for your gain is the wackest shit I’ve ever heard. Get ahead by being awesome, kind and working hard.” Banks responded to Sia with a series of tweets stating “your ugly pasty dry white lady winter skin face is the ugliest face I’ve ever seen, that must be why you hide it all the time. Have some fucking respect for my fucking traditional African religion, you pompous white b*tch.” The post was later deleted.
– Azealia Banks, Wikipedia

More recently, Banks has been posting some equally disturbing pictures. 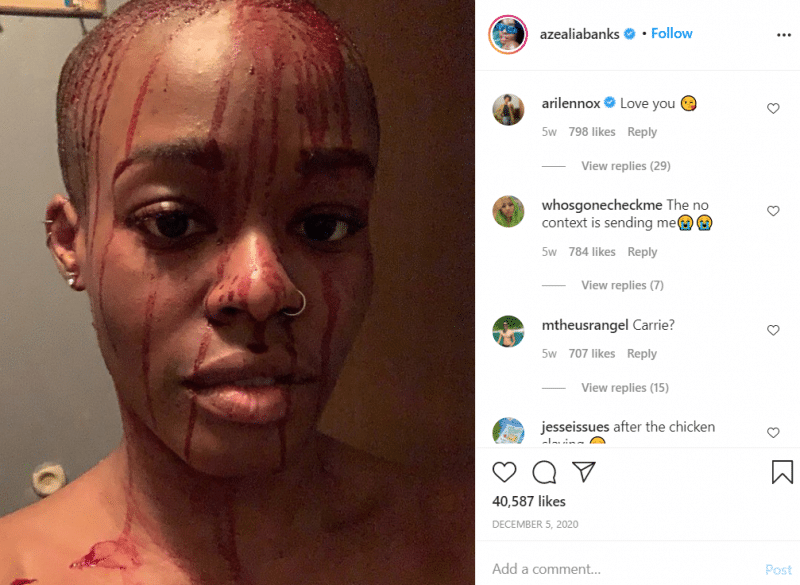 On December 5th, Banks posted this picture where she appears to be covered in blood. Probably another sacrifice. 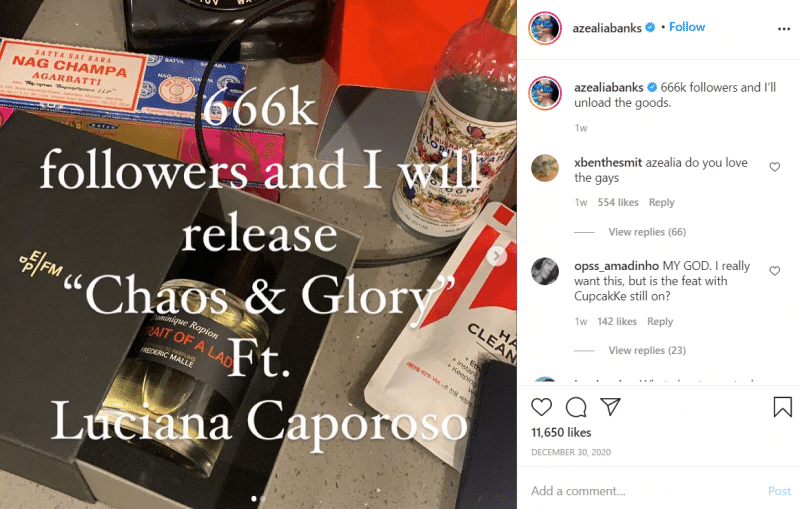 On December 30th, she posted about getting 666k followers. Because satanists gonna satan. 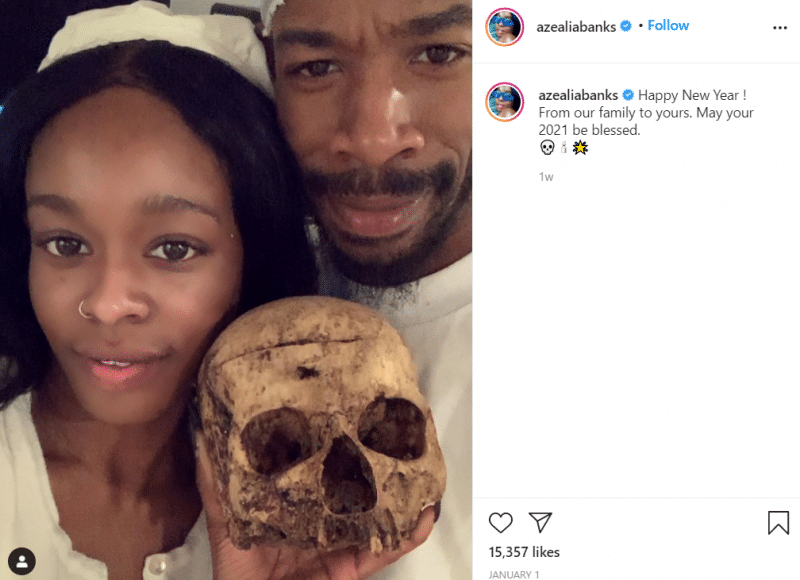 Two days later, she posted this pic where she holds a human skull. Did she dig that from her backyard as well?

Azealia Banks is not a widely successful artist. Also, she probably has mental issues. Also, she might be looking for attention on social media. However, she basically does out in the open what a WHOLE LOT of industry people do behind closed doors. And they’re not only sacrificing chickens.

Two years ago, a drummer who toured with Beyoncé accused her of “extreme witchcraft”. The lawsuit even mentioned “magical spells” and the “murder of her pet kitten”. Throughout the years, I’ve documented several accounts of people close to celebrities recalling them partaking in black magic and general satanism because that’s the main religion in the entertainment industry. Usually, these accounts are promptly dismissed and the accusers are called crazy. However, there’s no smoke without fire. And this fire burns eternally.

The post Azealia Banks Dug Up Her Dead Cat Named Lucifer and Cooked It on Instagram appeared first on The Vigilant Citizen.