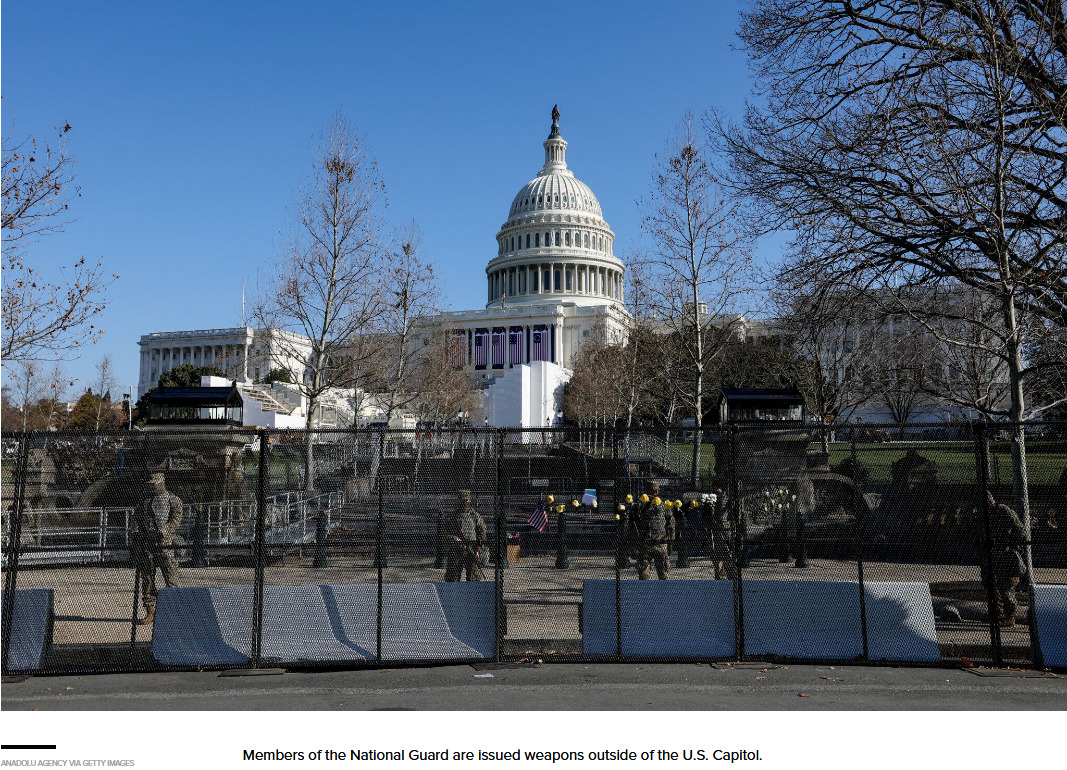 Washington DC has gone into a total lockdown ahead of Inauguration Day, with all-out martial law being implemented in response to FBI warnings of widespread violence being planned by right wing extremists. Having deemed the storming of the Capitol led by Capitol police and shady actors including national socialists, skinheads and BLM activists on January 6 to be a ‘violent insurrection’, and with the FBI and establishment news outlets all warning of a bigger wave of violence being planned by the same characters on and around Inauguration Day, an ever growing number of National Guard troops are being deployed to DC, the number of troops now occupying DC having reached a whopping 21,000!

With so many red flags surrounding the storming of the Capitol pointing towards an orchestrated false flag ushering in the new ‘war on domestic terror’, the FBI’s internal memo describing a plan by extremists to initiate a nationwide ‘uprising’ in the days leading up to and on Inauguration Day certainly raises a number of red flags causing independent thinkers to question whether a bigger false flag attack or series of attacks is now being orchestrated by the very agencies now warning us of them.

According to the FBI internal memo, armed protests are being planned in all 50 state capitols as extremists are allegedly in the process of orchestrating “a huge uprising.”

From ABC News on January 9:

Starting this week and running through at least Inauguration Day, armed protests are being planned at all 50 state capitols and at the U.S. Capitol, according to an internal FBI bulletin obtained by ABC News.

The FBI has also received information in recent days on a group calling for “storming” state, local and federal government courthouses and administrative buildings in the event President Donald Trump is removed from office prior to Inauguration Day. The group is also planning to “storm” government offices in every state the day President-elect Joe Biden will be inaugurated, regardless of whether the states certified electoral votes for Biden or Trump.

“The FBI received information about an identified armed group intending to travel to Washington, DC on 16 January,” the bulletin read. “They have warned that if Congress attempts to remove POTUS via the 25th Amendment, a huge uprising will occur.”

Many people smell a trap, and have warned concerned citizens to avoid all such protests over the likely possibility that either those planning the protests or radical infiltrators will use the event(s) to incite violence in a large-scale repeat of what took place on January 6, giving the establishment just the justification they are looking for to complete their setup of the emerging Covid1984 biosecurity state.

Is it possible the FBI’s so-called credible ‘intelligence’ is in fact only credible because the FBI is alone privy to the planning of such an event, because they are in on it? Given the FBI’s history of foreknowledge and orchestration of a series of domestic terror plots, such a possibility is not out of the question.

This presentation PROOVES WITHOUT DOUBT that America is in for a major fight that will put you and your family in the firing line, literally… So make sure you watch this presentation while it’s still online…

FBI Director Chris Wray told Vice President Mike Pence on Thursday that the bureau was monitoring an “extensive amount of concerning online chatter” related to potential threats leading up to the presidential inauguration on January 20.

“When we talk about potential threats, we are seeing an extensive amount of concerning online chatter—that’s the best way I can describe it—about a number of events surrounding the inauguration and, together with our partners, we evaluate those threats and what kind of resources to employ against them. Right now, we’re tracking calls for potential armed protests and activity leading up to the inauguration,” Wray told Vice President Mike Pence during a briefing on security for the inauguration.

“We’re concerned about the potential for violence at multiple protests and rallies planned here in D.C. and in state capitols around the country in the days that come that could bring armed individuals within close proximity to government facilities and officials,” Wray added.

The government has responded with an unprecedented lockdown of DC an entire week before the inauguration, implementing martial law on a scale rarely before seen in this country. Donald Trump invoked the Insurrection Act in order to initiate the otherwise unconstitutional action that violates the Posse Comitatus Act which prohibits use of military force on US soil. Roadblocks have been erected, blocking traffic in some streets, a giant ‘non-scalable’ fence has been erected around the Capitol, and citizens are being urged not to attend Joe Biden’s inauguration and to in fact stay out of DC entirely on January 20.

More photos of this martial law madness can be seen at the Huffington Post. 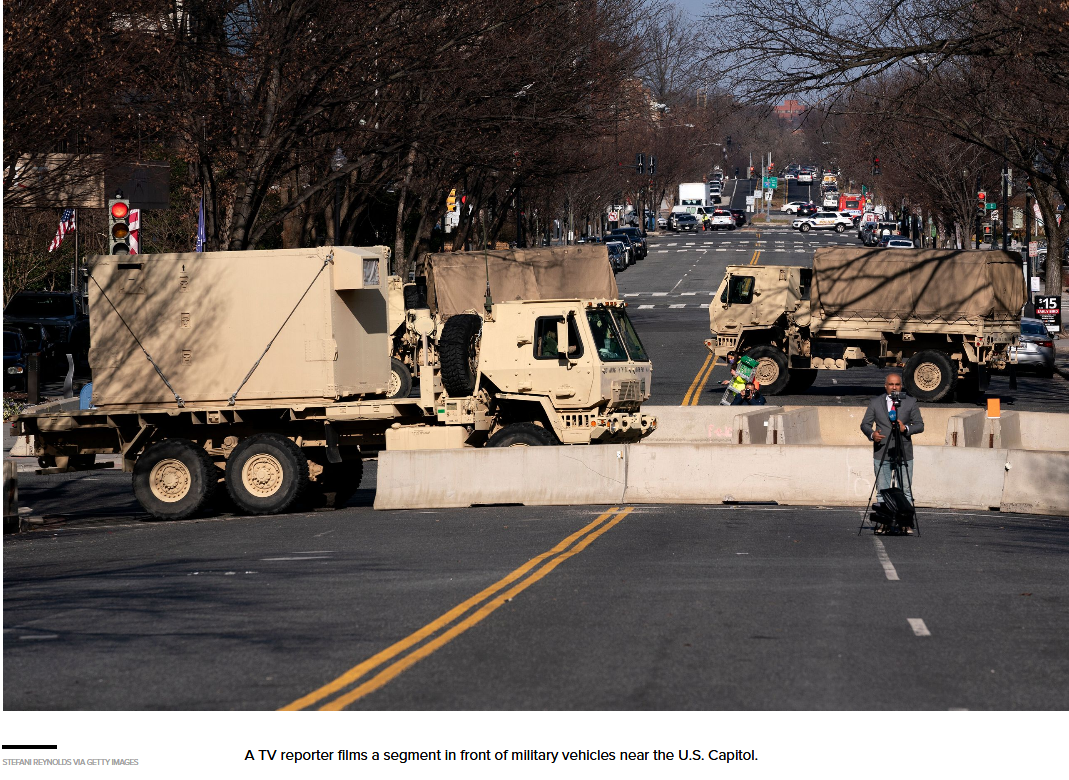 The biggest problem with the FBI’s warnings about planned violence is that even the Department of Homeland Security has admittedly seen no “specific, credible threats” ahead of Inauguration Day – as Zero Hedge’s Tyler Durden points out.

“There’s no specific credible threats at this point in time. There’s just this raised level of tension. And so we’re raising our security level. And we’re doing it across the country,” Ken Cuccinelli, acting deputy secretary of the Department of Homeland Security, said on CNN’s “New Day.”

Meanwhile, “the top federal prosecutor overseeing the sweeping probe of the riots at the Capitol told reporters that […] they had no “direct evidence” that rioters who stormed the U.S. Capitol had formed “kill capture teams,” refuting the apparent lies about strong evidence of assassination squads taking part in the storming of the Capitol made by prosecutors in Arizona and widely regurgitated by fakestream media outlets as a main segment of Friday’s news cycle.

The comments by Acting U.S. Attorney Michael Sherwin appeared to be an effort to walk back claims federal prosecutors in Arizona had made in a court filing late on Thursday, in which they alleged there was evidence that rioters intended “to capture and assassinate elected officials.” 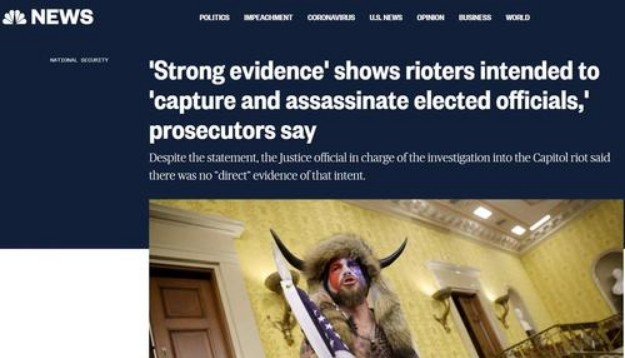 Later, news outlets such as NBC changed the headlines to reflect the reality that there was ‘no direct evidence’ of this imaginary plot being used to demonize protesters and push the establishment agenda, including the lockdown of Washington, DC. 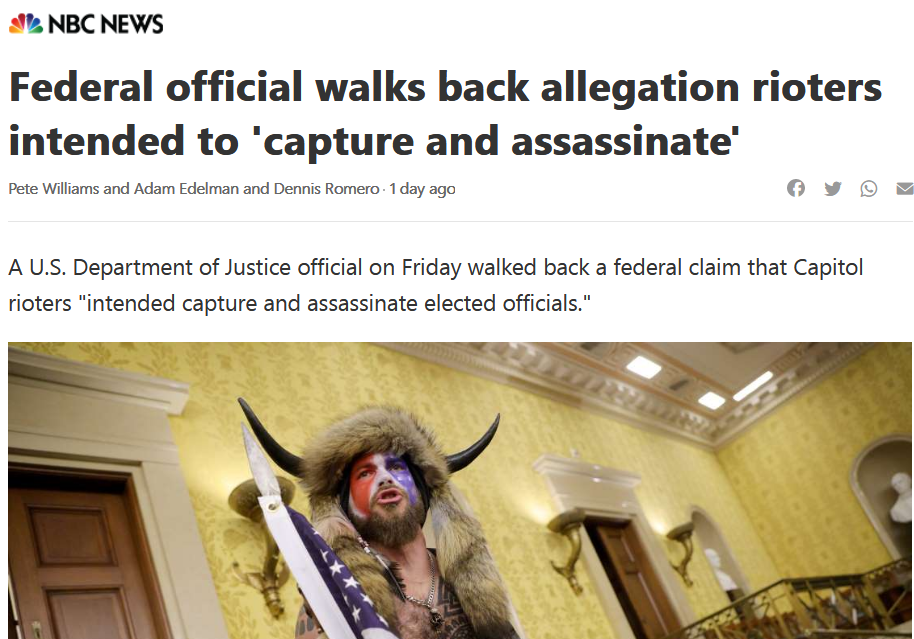 The statement of alleged violent intent came in a motion filed by federal prosecutors in Arizona seeking to have Jacob Chansley detained pending trial. Chansley, also known as Jake Angeli, was seen wearing horns, a fur headdress and face paint during the riot.
[…]
“Strong evidence, including Chansley’s own words and actions at the Capitol, supports that the intent of the Capitol rioters was to capture and assassinate elected officials of the United States government,” the document said.

It is interesting that the only known evidence of this elaborate ‘plot’ that never was, is Jake Angeli, who as I documented in my post on the January 6 storming of the Capitol is an Arizona actor and apparently tied to the both the Q psyop and leftist climate change activists, the type of suspicious profile that raises red flags, being what one would expect from a false flag operative.

Is this what preparation for the largest false flag in US history, orchestrated with the intention of sparking a civil war looks like? They’ve been warning of a ‘dark winter’ including election chaos leading to massive civil unrest, and it sure looks like they could now be preparing to launch the final stage in an operation designed to bring about the culmination of all the chaos they’ve been predicting since the summer of 2020.

In this short VIDEO, I will unearth A lost super-food will bulletproof you against any food shortage or famine. It’s a food that vanished with the Incas over 6 centuries ago

In the next crisis these lost skills will be more valuable than gold, food supplies and survival equipment combined. These skills have been tested and proven to work for centuries.

Here is just a small glimpse of what you’ll find in this massive 300-page sequel (in color) to The Lost Ways:

In any event, what we are seeing here is pure propaganda being peddled to create and perpetuate the new narrative now being used to sell the public on martial law being rolled out to lock down DC, and eventually all of America. 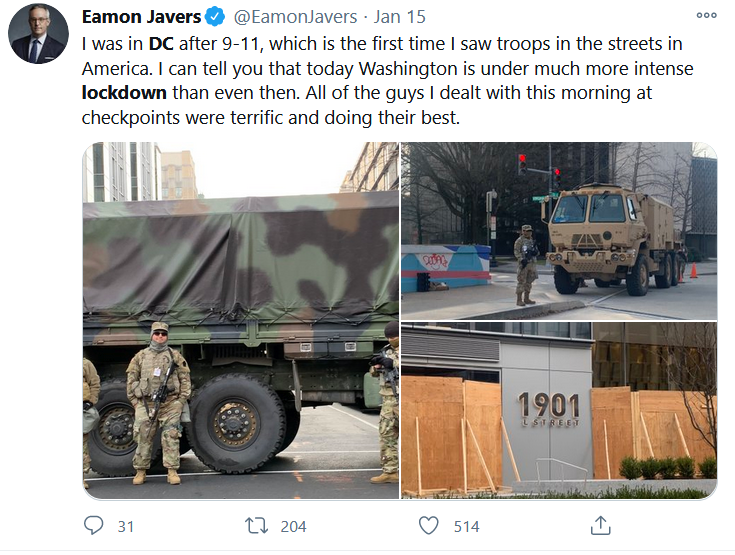 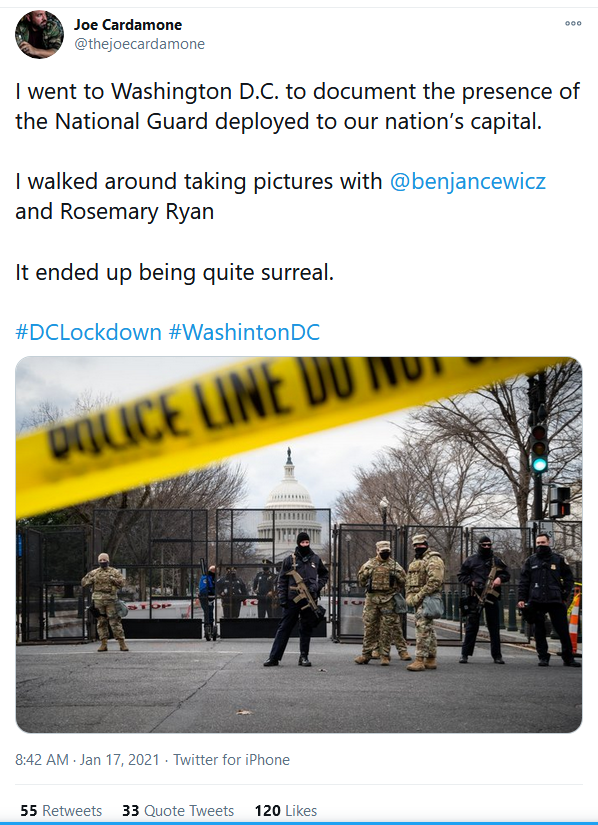 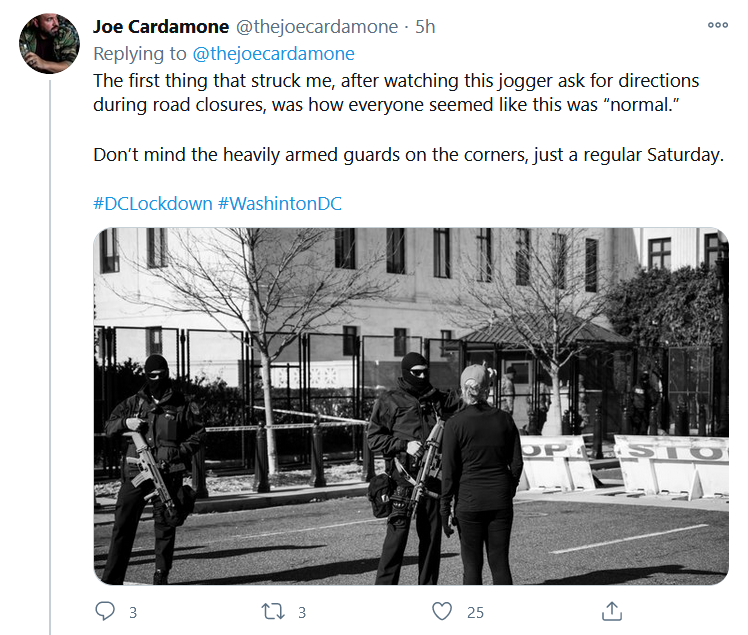 At least there are plenty of people out there who can see what’s going on here, and that it has nothing to do with party politics and everything to do with strengthening the power of the state in the increasingly speedier march to total tyranny. 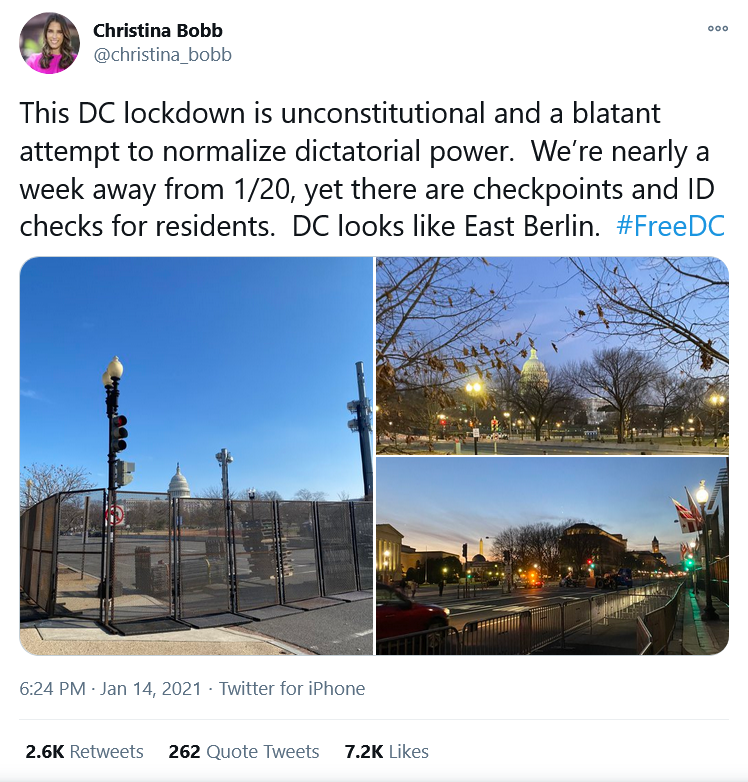 Whatever the real reason for this massive troop rollout and lockdown of DC, the military is clearly preparing for something, something totally out of the ordinary. 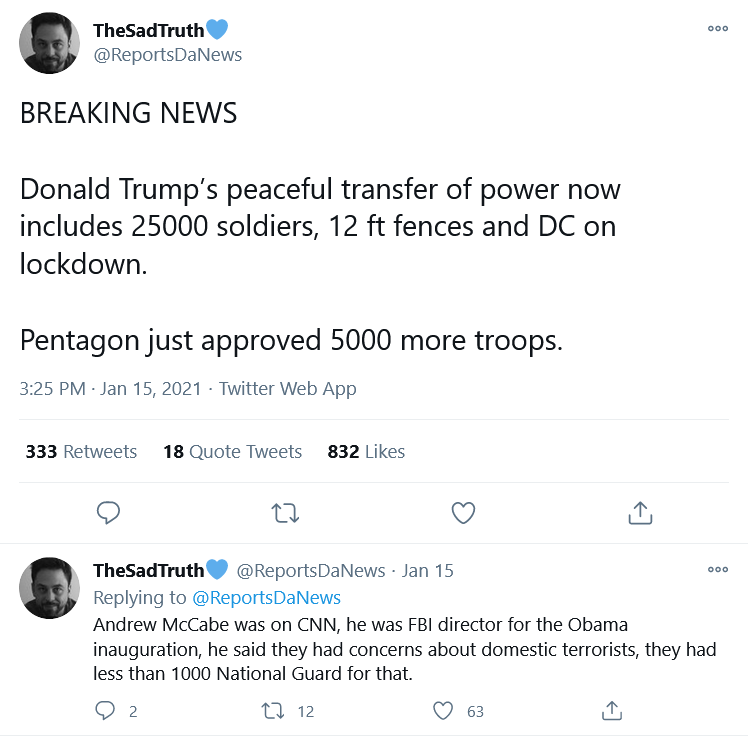 Authorities are warning of the “substantial” risk that explosives will be among the “tactics” used during protests before and during the Jan. 20 inauguration of President-elect Joe Biden, piling on to a previous memo urging law enforcement to be prepared for armed demonstrations in all 50 state capitols in the coming days, according to a recent report.

Is this what preparation for the largest false flag in US history, orchestrated with the intention of sparking a civil war looks like? They’ve been warning of a ‘dark winter’ including election chaos leading to massive civil unrest, and it sure looks like they could now be preparing to launch the final stage in an operation designed to bring about the culmination of all the chaos they’ve been predicting since the summer of 2020.