One of the scariest things that we can have happen to us, as a society, is a breakdown in social order. More than anything, that means a breakdown in law and order; essentially a time of anarchy, even if there is still a government in place.

The rioting following George Floyd’s death has put a number of municipalities, or parts of municipalities, in just this place. Police departments are being held back from doing their jobs to avoid confrontation, leaving the streets to those who are inciting the riots and destroying their cities.

Before I go any further, let me say that it has become increasingly clear that those who are initiating those riots are not the peaceful demonstrators, who are exercising their First Amendment rights. Rather, a number of mayors, governors and police chiefs have come forth, stating that they have clear evidence that the riots have been started by imported muscle, not by local demonstrators.

Nevertheless, these cities are in danger from the riots. There are those who are calling to move those riots out into the suburbs, because “that’s where the problem lives.” Whether they are calling for a racial civil war or not, it seems clear that those voices are pushing to further the violence, expanding it out into areas where their perceived “enemies” live and work.

At the same time, there have been a number of calls to “defund the police;” to the point where protesters in Washington, DC painted that on the street in front of the White House. It would be interesting to follow the money trail on that and see who is behind that movement, but that’s not my purpose here. My purpose is that you and I are ready to defend ourselves, our homes and our families, if those riots move into our neighborhoods.

Let’s Think it Through

Before discussing specific firearms that you might want to have on hand to deal with rioters, let’s talk a minute about the defensive strategy that we need to have in place, even if that is just in our own minds.

We must remember that people in that mob are essentially invisible to the law, in that it is hard to identify them and get a conviction; but you are someone they can identify, putting you at risk. On top of that, your actions will be held under public scrutiny, which is a much harsher judge than the law.

For our purposes, the best defense is one in which you never have to fire a shot. We must remember that the law only allows us to use deadly force in self-defense. That means that the courts have to agree, after the fact, that what we did was reasonable and necessary. If you shoot in today’s political and social atmosphere, you have to realize that you might be convicted, just to appease the mob, even if it was in self-defense.

With that in mind, one thing you want to do is to intimidate the mob, if you can, rather than shooting them. We’ve seen that happen recently, as store owners have stood guard at their places of business, well armed and ready to defend their livelihood. In most cases, the riots have passed those places by, and gone on to ravage other places of business.

If you are forced to fire a shot in order to defend home and family, you’re better off if you are able to merely wound the attackers, rather than killing them. This is a risky strategy, as a wounded assailant could still cause you great harm. But on the hand, it lessens the chances of ending up in jail.

You also want to consider ballistic body armor and even a helmet, to go with whatever gun you use. The mob can kill and often does. Even if they are unarmed, there is always the possibility of them beating someone to death. That ballistic armor can even be a help against that, spreading the force of blows and lessening the chance of them causing harm.

Whenever it comes to “best” guns, everyone has their own opinion. That’s a given. What I’m after here is more to get you thinking about particular types of guns, rather than specific models. While all of the guns I’m going to mention are excellent firearms, I’m presenting them more as categories, rather than specific makes and models, even though I’m listing the makes and models too. I’m also going to talk a little about specific ammo loads, in cases where I feel it is applicable. 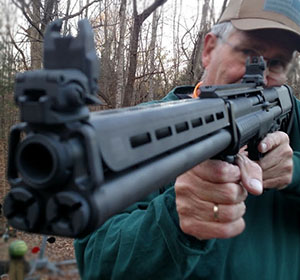 If there was ever a gun that was designed for close-range firepower, I’d have to say it is the Kel-Tek KSG.

While there are other excellent shotguns on the market, which follow the design of the KSG, this is the original. It is a bullpup shotgun, with dual switchable magazines, giving it a total capacity of 14 + 1 rounds. Seven round of each of two types of rounds, plus whatever is carried in the chamber.

A typical load for the KSG would be 00 buckshot in one magazine and slugs in the other.  That’s great for CQB, especially where breaching is necessary. But breaching is unlikely to be necessary in this case. Rather, you need the ability to defend yourself, perhaps without even killing anyone.

I would load that second barrel with a less-lethal round, like beanbags, rather than slugs. I’d also put something a bit smaller to replace 00 buckshot, such as #4 buckshot. That provides the option of starting out with something that can drive the crowd off, and then escalate firepower if needed. Even escalated, #4 buckshot is less deadly than 00 buckshot. 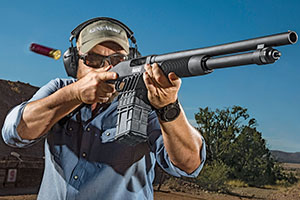 While the KSG is a great shotgun, it is a bit pricey. For those that can’t afford that, some other sort of a tactical shotgun would be great to have; something like the Mossberg 590M.

Mossberg has long been recognized as the standard for tactical shotguns. The 590M is a removable magazine-fed version of the very popular shockwave shotgun.

This removable magazine overcomes one of the biggest limitations for most shotguns, reload time. Rather than being forced to take the time to hand feed rounds into the loading chute to fill the internal magazine, you can slap a new magazine and keep going, just as you can with an AR-15 or semi-automatic pistol.

One modification I would make, to either this or the KSG, is to add a red dot sight. Most people consider shotguns to be a “point and shoot” weapon; but at the range you’ll probably be shooting, it would be good to have the ability to aim, allowing you to pick your target. You’re not going to have much shot spread and you want to make sure you can hit the right trouble maker. 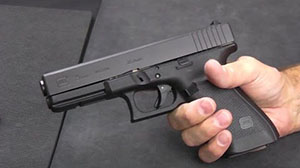 After considerably ballistic testing, I’ve come to some definite conclusions about what pistol calibers are the best for certain circumstances. For most people, this argument comes down to 9mm vs. .45 ACP. Personally, I’m a fan of both, even though I see them as being useful for different things.

The .45 ACP round was originally developed for the US Army, who was having trouble with Moro tribesmen attacking them high on drugs. They needed a round that would have high energy transfer, increasing the chances of knocking down these tribesmen, even if they didn’t feel the hit. The .45 ACP gave them that and there really hasn’t been another round developed which matches this ability.

If we assume that any rioters will be high on at least adrenaline, if not more serious drugs, then we need this knockdown ability. The Glock 21 holds 10 rounds, three more than the 1911, which is why I’ve selected it. Glocks are also highly customizable, with lots of after-market parts available. 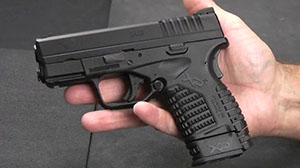 Such a time, when there is a chance of riots, coupled with reduced police protection, gives justification for concealed carry, if any were needed. There is always the possibility of being caught by that mob, away from home.

While I personally wouldn’t want to take on a mob with nothing more than a pistol, I’d much rather take them on with a pistol than with my bare hands.

My favorite concealed carry gun is the Springfield XDS, chambered in .45 caliber. I’ve carried other guns in the past and then settled on the XDS. Not only does it give me the knockdown power of the .45, but it does so in an easy to shoot, very reliable handgun, that’s fairly small for a .45. Mine is modified to have both tritium night sights and a laser sight, allowing me to use it any time anywhere.

The problem with this gun, as with any concealed carry gun, is magazine capacity. That’s especially true for a .45 caliber. Those fat bullets take up a lot of room, which translates to a small magazine capacity. I compensate for this by carrying two 7-round magazines, in addition to the 5 round magazine that’s in the pistol. Twenty rounds still isn’t enough to take on a mob, but hopefully it’s enough to scare them away, if nothing else. 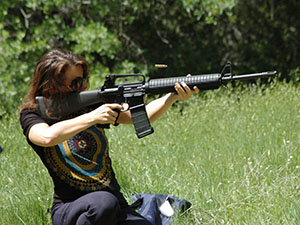 No matter what else you have, you should have an AR-15 as your backup gun. While I would not want to start shooting with that, due to the lethality of a rifle slug, I would want to have it leaning against the wall, loaded and ready, in case I needed a lot of firepower quickly. There are few civilian guns on the market, which can match the firepower that an AR-15 can offer us.

As for what particular AR-15 you should buy, I won’t even attempt to pick one. There are so many on the market, that it’s hard to pick out just one. Besides, my personal AR-15 is one that I’ve built myself, picking out the parts that I wanted. So I can’t tell you a brand.

More than anything, I’d say your optics are important. I’d be sure to have a red dot sight, as well as a powerful tactical light mounted on the rifle. That should take care of most circumstances. While infrared or night vision devices might be nice, you’ll lose important details in the image, so I’d probably avoid them.