I would like to ask about the covid vaccine if safe and if the vaccine is a tool to depopulate for the purpose of the new world Oder?

During the pole shift it seems that most elites will most likely survive from it because they have resources they need than average people.

Then why the elitist or globalists/cobal need such a depopulation agenda when they know the pole shift and many will die anyway?

Would really appreciate if you would provide some insights about this and thank you for your love and help for the humanity and thank you for Zara’s providing opinions. [and from another] http://en.wikipedia.org/wiki/Georgia_Guidestones

The Georgia Guidestones is a large granite monument in Elbert County, Georgia, USA. The four outer stones are oriented to mark the limits of the 18.6 year lunar declination cycle.

The center column features a hole through which the North Star can be seen regardless of time, as well as a slot that is aligned with the Sun’s solstices and equinoxes.

A 7/8″ aperture in the capstone allows a ray of sun to pass through at noon each day, shining a beam on the center stone indicating the day of the year.

A message consisting of a set of ten guidelines or principles is engraved on the Georgia Guidestones in eight different languages, one language on each face of the four large upright stones.

Moving clockwise around the structure from due north, these languages are: English, Spanish, Swahili, Hindi, Hebrew, Arabic, Chinese, and Russian. 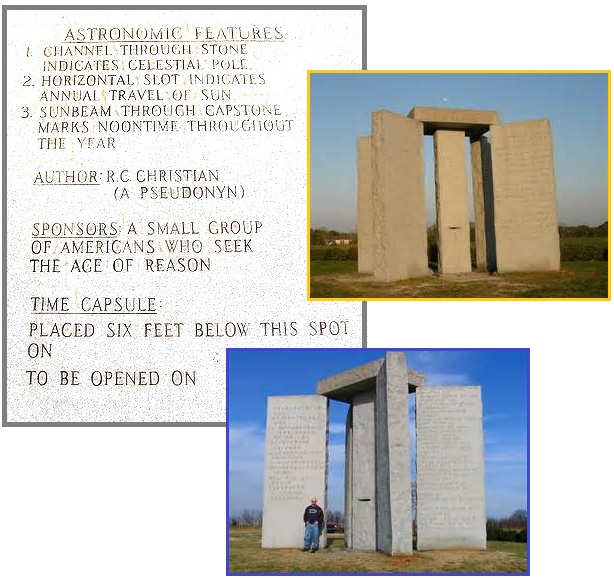 There is much confusion about a 90% reduction in the Earth’s population planned by the New World Order. This plan was revealed in writing on the Georgia Guidestones which state that the population should be no more than 500,000,000 humans “in perpetual balance with nature”. Combined with the known plans by the New World Order to reduce the population via deliberate plagues such as the George Bush bird flu virus release in 2005 or via vaccines such as Bill Gates planned in 2020 – both of which were discovered and blocked -  do the Guidestones indicate a viable and current plan?

Why the 90% reduction? During the 1947 Roswell incident, when MJ12 was formed and conversations with more than one alien group developed with MJ12, we, the Zetas, informed MJ12 that the Pole Shift would result in an approximate 90% reduction in the Earth’s population. We informed MJ12 that Nibiru would arrive in 2003, which it did, and that the Pole Shift would occur sometime after that. The 90% estimate was based on the fact that most of humanity lives along coastlines or river bottoms, which would be assaulted by tidal waves, flooding, earthquake devastation, and starvation.

Our 90% estimate was in no way a recipe for the New World Order crowd to begin sculpting humanity, but those operating in the Service-to-Self orientation wanted a robust slave population and began plotting ways to sculpt the population. Those to be eliminated were characterized by the phrase “useless eaters”, meaning they would not be expected to provide a benefit to their New World Order masters. This was, of course, not our intent in explaining to MJ12 the extent of the devastation to be expected. Our intent was to relay how serious the crustal shift would be, so that MJ12 would lay out plans accordingly. What Russia has done in developing their Far East is an example of such a plan.

We have gone on record from the start of the ZetaTalk saga explaining how the elite will NOT survive the coming Pole Shift in control of the planet. They will be trapped in their bunkers with their hired militia turning on them. They will not have the resources to bribe or threaten their militia or slave masters, and their slaves will escape during the turmoil. Money will have no meaning in the Aftertime. Love will be the commodity of the future. Survival groups that thrive will be those that share their resources and care for one another, the Service-to-Other mantra. Should those with great love in their hearts wish to change the 90% estimate, encourage the public to move away from the coastlines, to high ground, and to become self-sufficient.