Plan includes law enforcement and National Guard presence to reach its peak during the trial’s closing arguments and verdict. Minnesota’s National Guard last deployed in record numbers to the streets of Minneapolis during last summer’s riots. (Photo via Twitter)

(MINNEAPOLIS, MN) – Citizens and businesses of Minneapolis will be forced to reckon with a high street presence of the National Guard as the city prepares for the upcoming murder trial of Derek Chauvin, the disgraced ex-cop accused of killing George Floyd, with jury selection set to begin on March 8th.

At this past Monday’s City Council Public Briefing, it was confirmed by the Minneapolis Police Department (MPD) that the National Guard will be playing a key role in coordination of all city, county, state and federal law enforcement and security operations for the trial.

According to a recent New York Post report, Mayor Jacob Frey said as many as 3,000 law enforcement personnel could be deployed throughout the city during the trial.

During last summer’s street chaos in the city, the National Guard’s mobilization and response to the violence and property destruction came under heavy criticism for its delayed response and lack of direction. The criticism was largely directed at Minnesota Governor Tim Walz as businesses continued to be destroyed while the city continued to burn.

This time, law enforcement officials are making big promises to the public. MPD Commander Scott Gerlicher, who leads the Special Operation and Intelligence Division, said at the public briefing that the plan is to have two-thirds of the National Guard assigned to “Property Protection Detail” with the mission of “protecting key business corridors throughout the city.” OSN will be helmed locally by Gerlicher and MPD Chief Medaria Arradondo (pictured above).

According to the OSN rollout plan, the main goals will be to ensure the public’s safety and protect businesses throughout the trial. Here’s a look at what activities are “encouraged” and considered “unlawful”: OSN will operate with a “Unified Command Structure” allowing the following agencies to coordinate their security fusion efforts with MPD Chief Arradondo acting as the local authority:

A key point underscored in the plan, and should give the pubic an early indication of where operational resources are being spent, is when the ramp-up of “full deployment of law enforcement and National Guard begins” – according to the OSN it will begin during the closing arguments and verdict phase of the trial, as indicated in the slide below: Also prominent in the OSN, protection and safety measures to allow people to exercise their constitutional rights to free speech and peaceful demonstration.

Chief Arradondo has indicated he wants “peaceful protest” this time around – something his department was largely unable to achieve as violence escalated, businesses were destroyed and looted, and buildings burned during last summer’s riots following the death of George Floyd. One group of self-described ‘local police abolitionists’ are already warning would-be demonstrators ‘Don’t Get Caged’ – a reference to what they are calling ‘free speech cages’ (see image above) set up around the perimeter of the courthouse plaza designed to ‘kettle’ protesters.

Hennepin County Government Center in Minneapolis, where the trial will convene in courtroom C-1856, has already been heavily fortified with concrete barriers and barbed wire security fencing in anticipation of large crowds of protesters.

Here’s a good look at the security infrastructure deployed around the government plaza:

Security continues to intensify in downtown Minneapolis with spools of razor wire being placed between fencing. The 2nd precinct is the first police precinct to get fencing. The precincts previously were all behind concrete barriers into August after being barricaded in May. pic.twitter.com/XzqXEZQ0SN

Communications will also play a key role in ensuring the public safety during the trial. City officials have created an organizational structure for communications called the “Join Information System” (JIS) that includes OSN, illustrated in the diagram below: In the JIS, the National Guard will have access to all law enforcement and fire communications.

There will also be a set of approved communication channels, both public and private, coordinated by the city for disseminating information about the trial and public safety. These include weekly media briefings and social media. 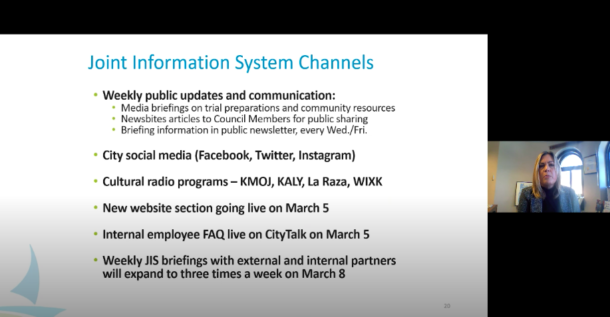 One proposal, that eventually received backlash and got nixed from the communications plan, was to pay ‘local influencers’ on social media to spread the city’s message about the trial and more. David Rubedor, the city’s community relations director, explained at a recent press conference:

“The goal of partnering with these groups is to create a “two-way” real-time communication channel to share information about the trial and public safety and transit plans, to “identify and dispel rumors,” and to “address community trauma” related to the trial…”

It didn’t take long for this fantasy proposal to get shut down:

It appears, at least for now, plan to pay ‘local influencers’ has been scrapped by #Minneapolis city officials re: upcoming #DerekChauvin trial. Announcement made at this morning’s public online briefing: pic.twitter.com/pGULXbrtV7

While city officials have spent the last eight months preparing for the high-profile trial, it is still unknown exactly who, and how many will ultimately show up for street actions.

In total, expect to see at least a dozen different protest group take to the streets of Minneapolis and beyond. Besides Black Lives Matter, the following groups are being deployed Democrat and other leftwing and foundation-funded political action organizations: Pictured above: A masked Mayor Frey prostrates to the social justice mob in the summer of 2020, after calls to ‘defund the police’ began to explode across the city and country.

“We will not be denied, we will not move back, we will not be afraid, but we will stand up, and we will continue to protest. We will continue to take to the streets,” said activist Nekema Levy-Pounds. “These barricades, and all this fencing and barbed wire will not stop us from getting in the streets, and speaking truth to power, and demanding justice, and demanding people in our community be set free from police violence and unnecessary harassment.”

It’s interesting to note how the Democrat and the Progressive left’s BLM/Antifa tent is expanding with new subgroups like Don’t Get Caged. The Democratic Party machine is still keen to cultivate social justice street actions in order to harvest political capital, but the leadership do not want to be tarred with any negative associations with violent Antifa mobs, or radical BLM cells taking over government buildings or city blocks as was the case in Portland and Seattle in 2020. So it makes sense that this new street action coalition is being rebranded for the Chauvin Trial, adding a couple new brands into the Media mix – something which mainstream media pundits loves, but which also help to dilute the focus on Democratic Party or outright Marxist affiliations which some of the activist groups have.

In terms of radical social justice activist groups, the introduction of rebranded subgroups or affiliates is also useful if a more high-profile organization, like BLM, seeks to create distance between itself and any of the extremist actions it is planning to carry out. In order to protect the parent brand and its lucrative funding streams, new cut-out organizations have been launched in order to run street agitation for the Chauvin Trial. In this case, following a summer of rioting in 2020, BLM built-up a sizeable multi-million dollar war chest thanks to patronage and generous donations from Silicon Valley and America’s top corporations like Google, Facebook and Walmart, to name only a few. Certainly FOX News and other rightwing outlets will still focus on BLM and Antifa, while Democrat-oriented outlets like CNN, MSNBC, New York Times and Washington Post will steer away from BLM and Antifa and draw attention to other and new activist groups, particularly if violence, arson, looting and general rioting ensues.

With the “George Floyd Justice in Policing Act of 2020” passing the U.S. House of Representatives and now being considered by the Senate, one can only imagine just how hyper-politicized the jury selection and trial of Derek Chauvin is going to be – from top to bottom, Federal to local.

Even the initial juror questionnaire that the court sent out to potential jurors was laden with social justice themes – setting the stage for what looks to be a dominant narrative the prosecution will pursue in this case.

The trial will be televised “gavel-to-gavel” with Court TV being the only network with cameras in the courtroom – serving as the central feed for all other media outlets. The trial will also be live-streamed across the Internet to global audiences.

To get a sense of how this trial is being packaged to the public, just watch your local or national media. Or, this Court TV video trailer for the event, where the legal cable network appears to be going full ‘BLM’ for their trial coverage:

Chauvin is charged with second-degree murder and manslaughter for the death of Floyd, and had another charge of third-degree murder thrown out last fall by presiding Judge Peter Cahill.

Prosecutors are now making a last-ditch effort to reinstate the third-degree murder charge, and they just might succeed.

On Friday, an appeals court found Judge Cahill’s prior decision to toss out the additional murder charge to be erroneous and have sent the issue back to district court to be added to the charging sheet prior to jury selection. Minnesota Attorney General Keith Ellison, the state’s top cop, has been pushing hard to get the third-degree murder charge re-instated. He will lead the prosecution’s case against Chauvin and promises to ‘get justice’ for George Floyd.

Last summer, AG Ellison, in the wake of Floyd’s death, had to defend his son Jeremiah Ellison’s ‘pro-Antifa’ tweet:

I hereby declare, officially, my support for ANTIFA

Unless someone can prove to me ANTIFA is behind the burning of black and immigrant owned businesses in my ward, I’ll keep focusing on stopping the white power terrorist THE ARE ACTUALLY ATTACKING US! https://t.co/m6jxtDYmTi

The younger Ellison, who currently serves the 5th Ward of Minneapolis as a City Council Member, has been part of a chorus of local activists recently who have criticized security planning for the trial since planning began in July of 2020.