“Politicians, religious leaders, and organizations from around the world who defend life and family will likely be put on a blacklist by the United Nations office for human rights. The drastic new measure may be used to impose sanctions on pro-family advocates and expose them to terrorist attacks,” according to C-FAM in its report “UN Human Rights Office Prepares Global ‘LGBT Hate Groups’ Blacklist” about the UN rights office collecting the names of anyone who opposes the LGBT agenda in any way. 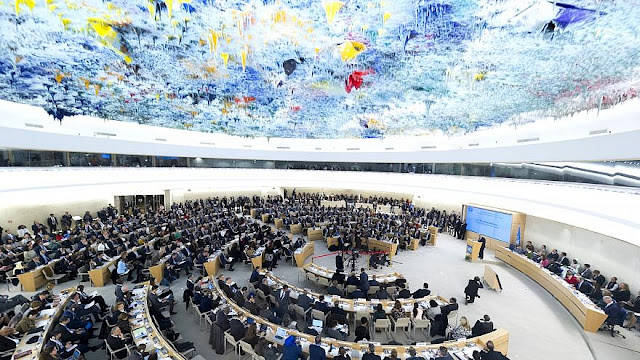 “Who are the main actors who argue that the defenders of human rights of LGBT individuals are furthering a so-called ‘gender ideology’?” said in January 2021 a report of the UN rights office to LGBT groups.

The UN rights office asked for examples of “public expressions or statements by political and/or religious leaders” who oppose LGBT “rights.”

Even though C-Fam is a conservative Catholic group, the UN effort to blacklist conservatives has not been condemned by the Vatican. In fact, in 2020 the UN praised the pope for backing same-sex unions. UN secretary-general welcomed Pope Francis’s remarks that homosexuals “have a right to a family” in move which has enraged conservative Catholics.

By his turn, the UN secretary-general is Antonio Guterres, who considers himself a Catholic. He was, from 1999 to 2005, the president of the Socialist International. He was also Secretary-General of the Socialist Party of Portugal, from 1992 to 2002.

To worsen, the U.S. is under the rule of Joe Biden, a socialist Catholic committed to impose the LGBT agenda around the world.

Christian groups will be blacklisted.

Individual Christians will be blacklisted.

The consequence of this blacklist is that these Christian groups and individuals will be hindered from busines transactions and will be boycotted from several other business.

Individual Christians will be denied essential services, including banking accounts and transactions.

How do I know this?

I don’t have my own PayPal account to receive donations, because after an international homosexual campaign, PayPal closed my account in late 2011. This case made headlines in the U.S. through WND. In 2017, a U.S. Jewish group made their PayPal account available to help me, but this account closed in 2019 after homosexualist groups sued the group.

Over the past few years, Facebook has imposed on me several 30-day blocks for expressing my views on homosexual sin and Islamic violence. Facebook even removed a Bible verse that I posted on my profile. Again, WND made this case a national headline in the U.S.

Potentially, groups and individuals blacklisted by the UN will be denied visas to the United States and other nations.

So while homosexualists are granted special visas to enter the U.S., Christians who oppose their immorality will be barred.

The real danger is against Christians who have a history of Christian opposition to the gay agenda. I can include my own experience. For decades I have a history of fighting this agenda. My fight includes thousands of articles in English, Portuguese, German, Spanish, Russian, Polish, etc.

The first evangelical book in Portuguese against the agenda gay was written by me and published by the Brazilian branch of Bethany House Publishers in 1998.

The largest gay magazine in the U.S. and the world, The Advocate, recognizes me publicly as an enemy of the gay agenda.

Many of my friends will also be blacklisted by the UN.

The global order now is to worship homosexuality and those refusing will be thrown to the arena of lions.

Many groups are helping to create this climate of persecution. Socialist Catholics in the Vatican, in the United Nations and in the U.S. government are main players. Pope Francis compared conservative politicians opposed homosexuality to Hitler.

CPAC, which labels itself as the biggest conservative conference in the United States, has not condemned homosexuality. On the contrary, CPAC has banned conservative Christians who oppose the gay agenda. CPAC has even embraced “conservative” homosexualists.

So if even “conservative” CPAC blacklists conservative Christians who oppose the homosexual sin, who can blame the UN, Pope Francis and Catholic Biden for doing it too?

United Nations praises the Pope for backing same-sex unions: secretary-general of the U.N. welcomes Francis’s remarks that homosexuals “have a right to a family” in move which has enraged conservative Catholics

Ed Shaw, Gospel Coalition and Homosexual Feelings: What They Say and What Jesus Said

CPAC is not Church and Church is not CPAC

Winning or Losing? The War, or ex-War, against Predatory Homosexuality and Its Profane “Marriage”

The Hijacking of Homosexuality by the Right, a Challenge for Christians

Steve Bannon and his views on homosexuality

How can evangelical leaders criticize homosexual activism in the Trump administration if they are involved in sex scandals?

Benjamin Netanyahu, Right-Wing Jews and the Gay Agenda in Israel