The Defender is experiencing censorship on many social channels. Be sure to stay in touch with the news that matters by subscribing to our top news of the day. It’s free.

A healthy 33-year-old woman in Bethel Park, Pennsylvania, who asked to remain anonymous, experienced paralysis 12 hours after getting her first dose of the Pfizer COVID vaccine and is still hospitalized, WPXI-TV reported.

The Pennsylvania woman said she initially felt fine after being vaccinated, but woke up in the middle of the night with no feeling in her arms or legs.

“It was the scariest thing in the world to go to sleep completely fine (and walking), to wake up 1:30 in the morning and not be able to move at all,” the woman said. “I’m literally counting on my daughter to hand me my phone to call to get help.”

Paramedics rushed her to the hospital where she was later transferred to the Cleveland Clinic where doctors ran tests to figure out how and why she suffered paralysis. An MRI and spinal tap were clear and blood work all came back negative, ruling out any rare diseases or disorders.

“There is just nothing they can find wrong with me,” the woman told Channel 11. “No underlying conditions, I have nothing in my history and they are basically telling me, ‘You’re healthy and we can’t figure out why this is going on.’”

Although she has regained feeling and strength in her arms, she has no function from her lower chest down besides very slight movement in a few toes. The woman’s family confirmed with Channel 11 that her case was reported to Pfizer.

Dr. Dave Weber, an infectious disease doctor with University of Pittsburgh Medical Center, said he has not heard of anything like this happening anywhere in the world with the Pfizer vaccine.

“I’m sure there is more than one explanation, and it would be premature for me to judge if it’s one of the side effects of the vaccine or not,” Weber said. “I think it definitely needs to be looked into and be reported.”

“We take adverse events that are potentially associated with our COVID-19 vaccine, BNT162b2, very seriously. We closely monitor all such events and collect relevant information to share with global regulatory authorities. At this time, our ongoing review has not identified any safety signals with paralysis and the Pfizer-BioNTech Covid-19 vaccine. To date, more than 2001 million people around the world have been vaccinated with our vaccine. It is important to note that serious adverse events that are unrelated to the vaccine are unfortunately likely to occur at a similar rate as they would in the general population.”

However, a search on the Centers for Disease Control and Prevention’s Vaccine Adverse Events Reporting System (VAERS) for paralysis, including transverse myelitis, myelitis, paralysis and Guillain-Barré Syndrome (GBS), yielded 151 total reports. Eighty-eight cases of paralysis-related disorders were reported with Pfizer, 62 with Moderna and 11 with Johnson & Johnson’s (J&J) vaccine. 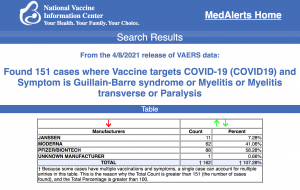 Reports of paralysis associated with other vaccines

The Defender reported April 15, that a healthy 43-year-old Mississippi man suffered a stroke and subsequent paralysis hours after being vaccinated with J&J’s COVID vaccine. He is unable to walk or talk, and is paralyzed on one side of his body. The family believes “without a doubt” the vaccine was the cause.

AstraZeneca disclosed that the September pause was actually the second pause in two months. The first incident, which initially went unpublicized, occurred in July when a UK participant experienced TM after one dose and ended up with a new diagnosis of multiple sclerosis.

TM is well recognized as sometimes being “the first symptom of an autoimmune or immune-mediated disease such as multiple sclerosis.” Two-thirds of those who experience TM remain permanently disabled.

The Defender reported Oct. 8, 2020 on Colton Berrett, a once healthy, active 13-year-old boy, who was diagnosed with TM shortly after receiving the Gardasil vaccine. After Colton passed away Jan. 5, 2018, rather than put Gardasil on trial, Secretary of Health and Human Services stipulated to a settlement and awarded damages for Colton’s permanent transverse myelitis in the National Vaccine Injury Compensation Program (NVICP).

A systematic review in SAGE journals of TM revealed 37 cases of transverse myelitis reported with different vaccines, including MMR, hepatitis B and DPT. Researchers found that in rare cases, vaccines may be associated with autoimmune phenomena like transverse myelitis and speculated that a common denominator like an adjuvant, might trigger this syndrome.

Based on analysis of information posted at the U.S. Court of Federal Claims website, conditions involving demyelination and paralysis — TM, ADEM, GBS and chronic inflammatory demyelinating polyneuropathy — are among the top vaccine injuries for which Americans (primarily adults) have filed claims with the NVICP.

GBS is currently the NVICP’s second-most compensated vaccine injury. As of Sep. 25, 2020, there had been 330 TM-related petitions adjudicated and $150 million in damages awarded to 266 claimants (including estimated annuities).