Russia on Friday banned top officials from Joe Biden’s administration from entering the country and expelled 10 US diplomats from Moscow as it announced a wave of tit-for-tat sanctions amid soaring tensions.

Moscow nonetheless said it viewed the prospect of a summit between Biden and Russian President Vladimir Putin this summer ‘positively’.

On Thursday, Washington announced sanctions and the expulsion of 10 Russian diplomats in retaliation for what it says is interference by the Kremlin in US elections, a massive cyber attack and other hostile activity, including troop movement on the Ukrainian border.

Earlier Friday Foreign Minister Sergei Lavrov told reporters that Russia was asking ten US diplomats to leave the country.They also kicked out five Polish diplomats in response to a similar move by Warsaw.

Tensions on the Ukrainian border are also building with Russia’s troop build-up. Putin on Thursday closed the Kerch Strait to all foreign warships for six months. 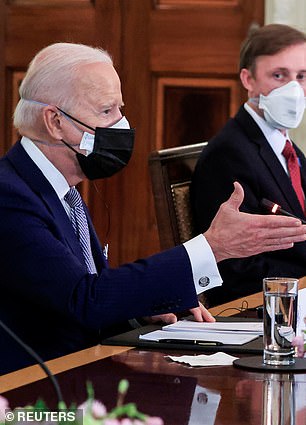 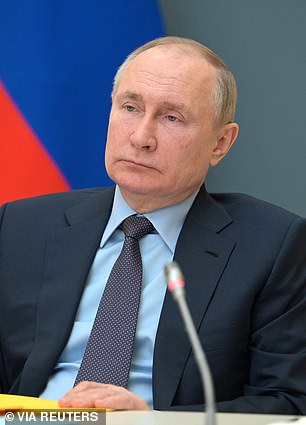 Russia on Friday banned top officials from US President Joe Biden’s administration from entering the country and expelled 10 diplomats from Moscow as it announced a wave of tit-for-tat sanctions and expulsions of diplomats, as tensions soar between the rivals 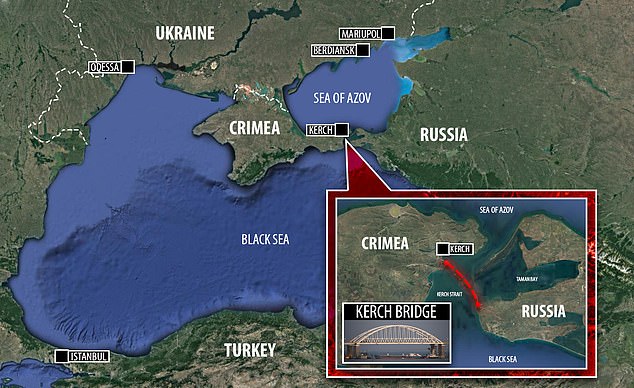 Hours later, Putin took advantage of Biden’s U-turn back by closing off the Kerch Strait between Crimea and Russia, blocking all foreign warships from getting to Ukraine until October 2021. Ukraine said the move was an ‘act of war’ and were disappointed foreign destroyers had turned around before one of Moscow’s biggest escalations in the last 30 days 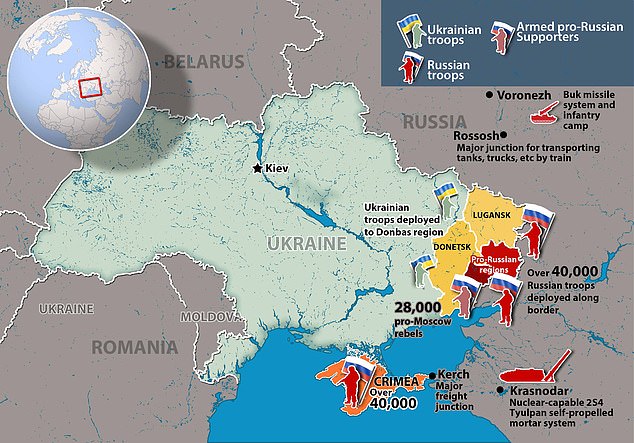 Putin is continuing to build up his forced on the border with Ukraine, as the government warns troops numbers could swell to 110,000 with 7,000 tanks and other vehicles in support

But Russia’s foreign ministry insisted that it viewed Biden’s proposal to hold a summit with Putin ‘positively’, adding that it was ‘currently under consideration’.

Biden’s offer earlier this week of a summit had amounted to a peace offering, as tensions between Russia and the West have escalated over the conflict in Ukraine and the new penalties levied by Washington.

The US penalties widened restrictions on US banks trading in Russian government debt and sanctioned 32 individuals accused of meddling in the 2020 US presidential vote.

Biden had on Thursday described the new US sanctions against Russia as a ‘measured and proportionate’ response.

In March, Russia recalled its ambassador to the United States back to Moscow for consultations on the future of US-Russia ties.

The rare move came after Biden said Putin would ‘pay a price’ for alleged election-meddling and agreed with the assessment that Putin is a ‘killer’.

Kremlin spokesman Dmitry Peskov on Friday said Putin had long talked about the importance of normalising relations between Moscow and Washington.

‘It is indeed good that the points of view of the two heads of state coincide on this,’ he said.

But Peskov also blasted the new round of penalties imposed by Washington, saying America’s ‘addiction to sanctions remains unacceptable.’

Finnish President Sauli Niinisto on Friday offered his country as a venue for a possible Biden-Putin meeting.

In recent weeks, Russia’s massing of troops on Ukraine’s northern and eastern borders, and on the Crimean peninsula it annexed seven years ago, have contributed to the sharp escalation in tensions.

US forces in Europe have raised their alert status in response, while NATO has issued warnings to Moscow.

NATO on Friday said reported plans by Moscow to block parts of the Black Sea would be ‘unjustified’ and called on Moscow ‘to ensure free access to Ukrainian ports in the Sea of Azov, and allow freedom of navigation’.

Russian state media reported that Moscow intends to close parts of the Black Sea to foreign military and official ships for six months, triggering concerns in the United States and the European Union.

Sanctions as a tool for punishing Moscow have become routine since 2014, when Russia annexed Crimea and fighting erupted between Kiev’s forces and pro-Russia separatists in eastern Ukraine.

Relations have plunged further more recently, with Washington accusing Moscow of interfering in its presidential elections in 2016 and 2020.

This year even before the recent alarm over the Ukraine conflict, tensions had ratcheted up sharply after the US slapped sanctions on Russia over the poisoning of jailed Kremlin critic Alexei Navalny.

Ties then hit rock bottom last month after Biden, who promised to take a firmer line on Moscow than his predecessor Donald Trump, agreed with a description of Putin as a ‘killer’. 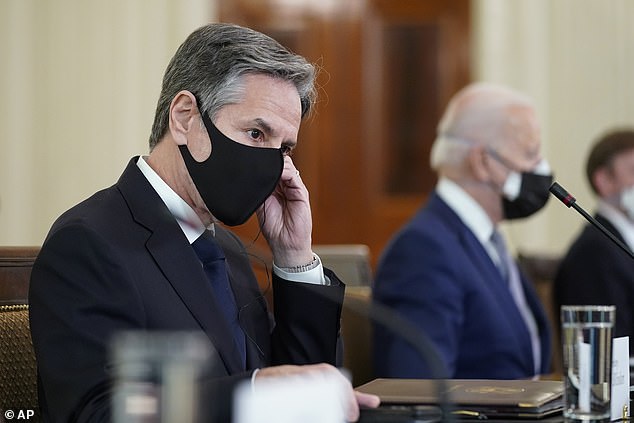 Secretary of State Antony Blinken was one of the Biden officials banned from Russia in Putin’s retaliation. He is pictured at the bilateral meeting with Japan at the White House on Friday