Memorial Day normalizes war, the same war that Satanists have waged against God and man for centuries. All wars are psyops. COVID is far from their largest psy-op. It’s small potatoes compared to World War One, World War Two, the Cold War, Korea, and Vietnam. All of these were staged by Illuminati bankers to degrade and destroy Christian civilization and to sacrifice millions of humans to Satan. If we consider the war dead as “heroes” rather than victims of a diabolical conspiracy, we are not honoring them. We are condoning their murder.

I urge you to watch this interview with Professor Anthony Sutton. In it, he explains that Wall Street financed Hitler and the Nazi war machine and provided indispensable technology. Wall Street also funded the Bolshevik revolution, literally built the USSR and supplied it with nuclear bomb technology.

“Capitalism and Communism are identical,” Sutton says, a truth we are discovering today, to our consternation. Far from being free, we are mice in a laboratory run by psychopaths.

A world-Communist state has always been their goal.

My annual Memorial Day article — War is a tragic hoax. The covid hoax is but another example of the long-term Cabalist war on humanity.Wars are the closest thing to hell on earth. What do you expect? They are devised by Satanists. Why do we accept them as natural and inevitable? Why do we perpetuate the myth that soldiers were “defending our freedom” when in fact wars are designed to sacrifice them to Satan and deprive us of our freedom?

“Revolution” really means, “overturning” Western civilization. Replacing God with Lucifer. “Christianity is our only real enemy since all the political and economic phenomena of the bourgeois states are only its consequences,” Rakovsky, says.

Peace is “counter-revolutionary” since it is war that paves the way for revolution. Revolution really means, overturning Western civilization. Thus, war is a self-destructive enterprise contrived by folks who want to degrade and enslave us.

When the US and England loaned Mexico money in 1903 using its customs revenue as collateral, Illuminati banker Jacob Schiff cabled his English counterpart, Ernest Cassel: “If they don’t pay, who will collect the customs?” 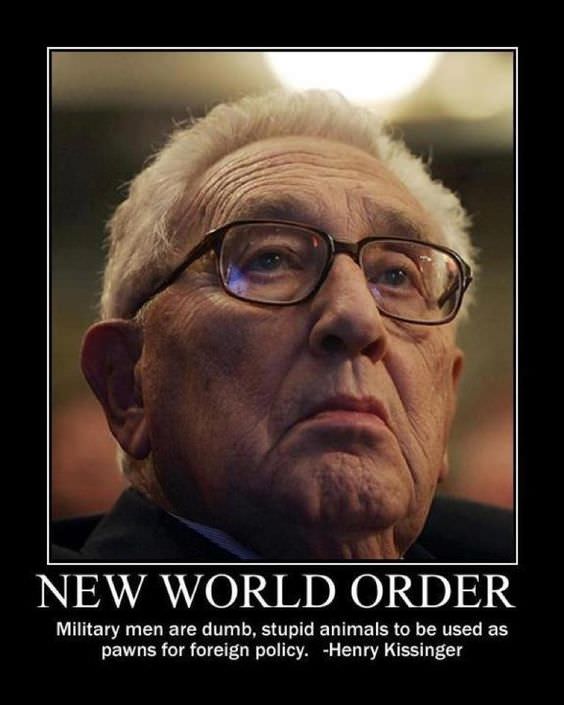 Marine General Smedley Butler (1881-1940) confirmed that he was “a high-class muscle man for Big Business, for Wall Street and the bankers.”

In War is a Racket (1935) he wrote: “I helped make Mexico, especially Tampico, safe for American oil interests in 1914. I helped make Haiti and Cuba a decent place for the National City Bank boys to collect revenues in. I helped in the raping of half a dozen Central American republics for the benefits of Wall Street. The record of racketeering is long. I helped purify Nicaragua for the international banking house of Brown Brothers in 1909-1912. I brought light to the Dominican Republic for American sugar interests in 1916. In China, I helped to see to it that Standard Oil went its way unmolested.”

Flash forward to 2011 when NATO fomented and led a mission in Libya, one of only four countries that didn’t have a Rothschild central bank. Now Libya does. They don’t call it imperialism anymore. They call it “Our mission in Libya.” Soldiers aren’t mercenaries; they are “missionaries.”  Now they’re after Syria, North Korea, and Iran, three of the four remaining countries without a Rothschild central bank.

CENTRAL BANKERS ARE BEHIND ALL WARS

All wars are organized by the Illuminati bankers to collect or incur debt, kill goyim, plunder or profit, and to advance their program for Masonic Jewish “world government” tyranny. They appeal to our patriotism to sucker us in. We are told we are fighting to “preserve freedom” when the opposite is actually the case. 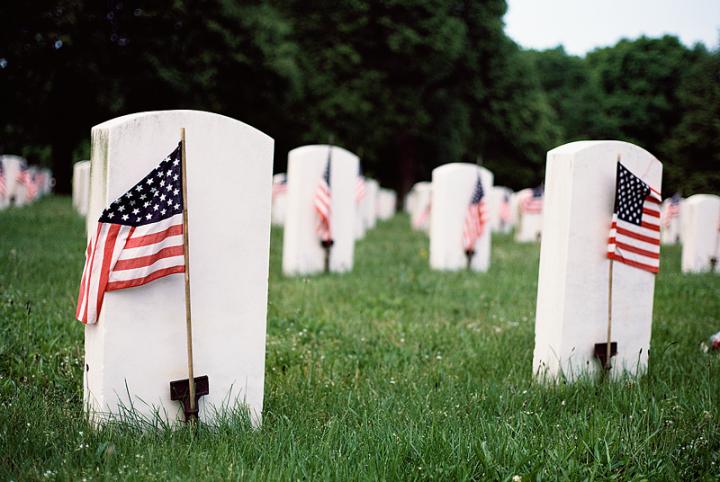 So how should we regard the war dead?

I regard their lives as cut short tragically in a bogus cause. They are human sacrifices, dupes and mercenaries. We have all been duped for a very long time. That gives Memorial Day a taint of pathos and cynicism.

While we were losing fathers and sons, Allied and Nazi central bankers were sitting shoulder-to-shoulder in Basel at the Bank of International Settlements (BIS) mainly financing the Nazis.

The BIS handed the Nazis the national treasure of Czechoslovakia, Holland, and Belgium to ensure the war could go on. This gold, worth $378 million at the time, was the basis of loans to the Nazis and was never returned.

The US Federal Reserve, the Banks of England, France, Italy, Japan and the Reichsbank were all members of the BIS. The Nazi Reichsbank had most seats but the BIS President was a Rockefeller factotum Thomas H. McKittrick (1889-1970). (Significantly he has no Wikipedia entry.)

“CHANGING THE WORLD” MEANS HAVING A WORLD WAR 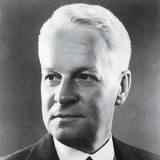 Questioned by a US Treasury Dept official in March 1945, McKittrick said that the war had been a charade all along, with Germany taking the fall.

Asked why the BIS worked with the Nazis, he replied, “In the complicated German financial setup, certain men who have their central bankers’ point of view, are in very strategic positions and can influence the conduct of the German government…”

Then he spelled it out, albeit in a euphemism. The war’s purpose was to reposition Germany in the banker New World Order:

“McKittrick went on to say that there was a little group of financiers who had felt from the beginning that Germany would lose the war; that after defeat, they might emerge to shape Germany’s destiny. That they would “maintain their contacts and trust with other important banking elements so that they would be in a stronger position in the postwar world to negotiate loans for the reconstruction of Germany.”

The quotation above is from Charles Higham’s mind-blowing book, Trading With the Enemy, 1983, p. 37.

These bankers controlled a Who’s Who of corporations that had factories in occupied Europe that underpinned the Nazi war effort and profited handsomely. 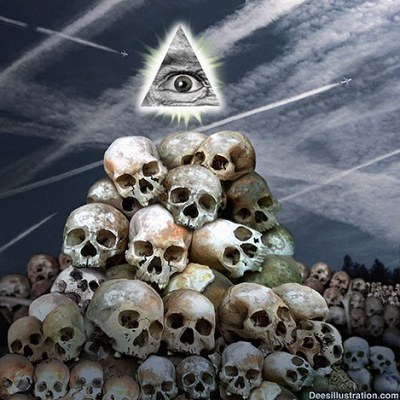 Ford, General Motors, Standard Oil and ITT provided the Nazis with essential trucks, airplane engines, materiel, and technology, often giving the Nazis preference during shortages.  In a telling example, the Allies bombed a ball bearing plant in Germany only to have the stock replaced by a factory in Pennsylvania (via Sweden.)

Higham refers to these bankers as “the fraternity.” They are the Illuminati.

An earlier set of bankers masterminded World War One and kept it going. But you get the picture. All wars are really waged by the Luciferian central bankers against humanity, i.e “the goyim.” 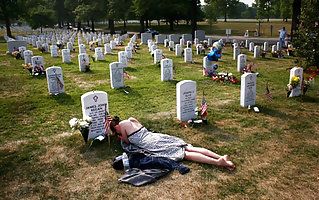 In 1916, almost 1.2 million British, French and German soldiers died or were maimed in the Battle of the Somme alone. They were the cream of their generation. The British national debt multiplied tenfold.

By participating in any war, we are accomplices in our own destruction.  They are sacrificing us to their God Satan.

The military is catching on too. A recent poll found that only 34 percent of U.S. veterans of the post-9/11 military believed that the Iraq and Afghanistan wars were worth fighting. US soldiers now generally say they are fighting “for their buddies” not for their country.

We cannot honor the war dead without recognizing that, like us, they have been duped. Otherwise, we perpetuate the sinister power which holds us prisoner.

Ultimately, the New World Order is about replacing the rule of God with the rule of Lucifer. That’s why “God” has become a dirty word. War is the principle means by which Lucifer’s disciples, the Cabalist (satanist) central bankers, “change the world.”

They have erected a police state behind the facade of freedom. We don’t know this because our leaders in government, education, and media are witting or unwitting participants. Treason to God and country is a prerequisite for success in many fields, more so than ever today.

If honoring the war dead means perpetuating a cycle of endless war, we must stop. Better to honor the dead by abolishing wars. We can do this by nationalizing private central banks and making the bankers answer for their crimes.