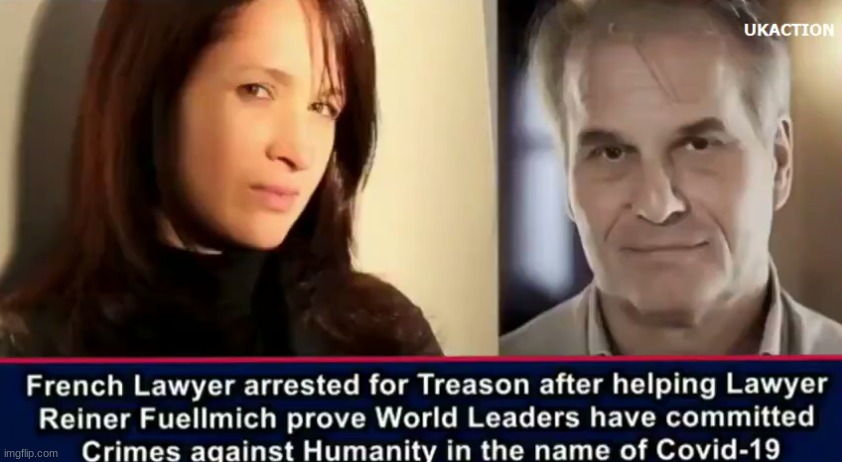 In a shocking turn of events one of the attorneys assisting Reiner Fuelmich in proving world leaders have committed crimes against humanity in the name of Covid-19, has been arrested in France on suspicion of terrorism and treason.

According to The Expose:

Virginie de Araujo Recchia, a French attorney living in France who is participating in the work of the Citizen Jury with Reiner Fuellmich, was arrested in her home at dawn on March 22nd in front of her children. The arrest comes three weeks before ahead of the French presidential elections.

Fuellmich’s team have allegedly been informed the charges involve counterterrorism and possibly treason, and relate to the passionate work she does for the French people as well as the world, in fighting to restore our God-given rights.

At the beginning of the year, Virginie de Araujo Recchia, in partnership with her colleague Jean-Pierre Joseph, and two other jurists, filed a complaint before the head of the investigating judges on behalf of the associations BonSens.org, AIMSIB and the Collectif des Maires Résistants (Collective of Resistant Mayors) against the parliamentarians who validated a law on mandatory Covid-19 vaccination in August 2021.

This law forced millions of professionals to undergo experimental gene therapy or risk losing their jobs.

According to sources close to the case, she was working on a complaint against political parties and the actions of some of their members.

She had just made public her report entitled “Dictatorship 2020” accusing the government of state terrorism, attacking the fundamental interests of the nation and crimes against humanity.

This flagrant violation of rights demonstrates there is no more freedom of speech- and proves that if we speak out, as Virginie Araujo-Recchia has done, that we will be persecuted.

Even those who disagree with Virginie de Araujo Recchia’s message should know that their rights to free speech are threatened by such action. Just because you may go along with the “official” narrative now does not mean at some point you won’t disagree with it.

What happens then, if you have not moved to help another faced with this? You know this is fundamentally wrong, and against natural law.

This is a time for unification and standing up. We cannot continue to allow this tyranny to escalate. When Shakespeare said in King Henry VI “First, kill all the lawyers”… he was referring to the first step in destabilizing a society. For a society cannot be a peaceful society if it does not follow the Rule of Law or its Constitutions of God-given liberties. None of us is safe when tyranny rules.

The first casualty of war, as they say, is the truth. The next may be the lawyers and advocates, and then anyone else. Don’t stand by and let an arrest of a freedom loving patriot go unpunished or unheard. Please pray for her speedy release, her safety, and then flood the officials involved in this with calls and emails to protest this travesty.

If you don’t, this could just be the first in a wave of purges in the post-democracies of continental Western Europe.