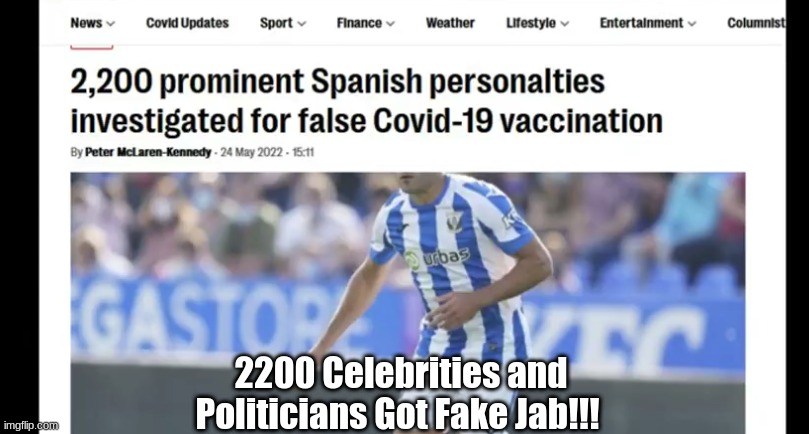 The “Jenner Operation” has uncovered at least 2,200 famous people with false Covid-19 vaccination certificates after these were bought from a nurse.

So this answers the question of how some people aren’t having adverse effects from the vaccines.. Amongst those that have been investigated are leading singers, musicians, football stars, business people, politicians and top medical personnel.

The scandal involved people being added to the National Immunisation Registry in exchange for money, with many of them familiar faces and household names.

The latest of these to be charged is the President of PharmaMar José María Fernández Sousa-Faro, an IBEX 35 company, and one of the largest pharmaceutical companies in Spain. The company is dedicated to researching drugs including cancer, Alzheimer’s and yes, Covid-19.

The 76-year-old businessman, who has not yet been summoned to testify, was included in the lists to reflect that he had received the third dose.

The leader of the network was a nursing assistant at the La Paz University Hospital, where he is accused of charging more than €200,000 euros for fraudulently registering 2,200 people as vaccinated in the National Registry against Covid-19. He has been arrested and is currently in custody.

Among those accused are Bruno González Cabrera, a defender who played for Betis, Getafe, Levante and Valladolid. Fabio Díez Steinaker in beach volleyball, runner-up in Europe and fifth in the Sydney Olympic Games. The former Valencian boxer and wrestler José Luis Zapater, alias Titín, who starred in more than a thousand fights.

According to the police who are investigating the 2,200 over false Covid-19 vaccination certificates, the fee was dependent on your social standing. The more important you were, the higher the price.