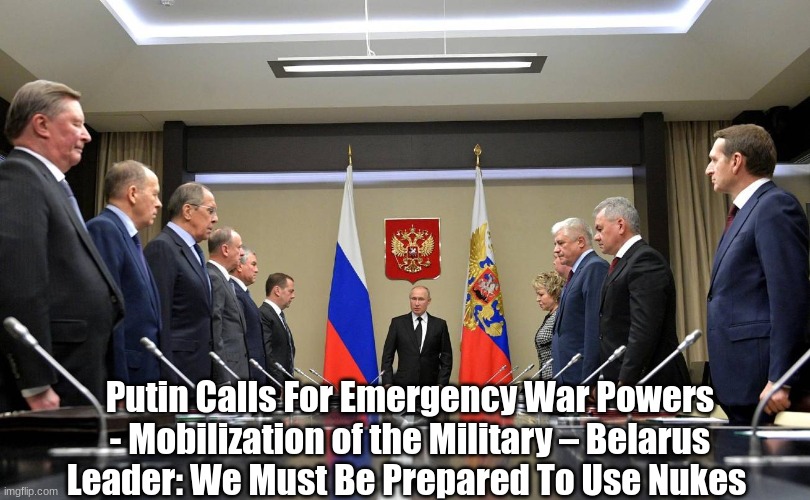 By WarNews24/7
Translated from Greek

Putin hastily passes a special bill calling for emergency powers for the Russian Armed Forces. The bill speaks of a general mobilization plan while putting the defense industry in a “state of war” asking them to work 24 hours a day without holidays and with triple shifts!

This is a bad development, not only for the course of the war in Ukraine. Mainly because the Russian leadership is preparing for the extension of the war outside Ukraine. The bill makes reference to “military operations abroad” specializing in Ukraine, but lays the groundwork for Kaliningrad and the Baltic.

The Russian leadership sees an organized NATO plan in both the Baltic and in the case of Norway and is preparing to respond militarily if the blockades in both Kaliningrad and Svalbard are not lifted.

Before reaching this point, it is not ruled out that he will attempt “something that will escalate” the situation around Ukraine, for example, the bombing of NATO convoys outside Ukraine, etc.

The bill was submitted to the State Duma.

The memorandum states that this includes,.. a “special military operation in the territories of Lugansk, Donetsk and Ukraine.”

It is noted that in these conditions “there is a short-term increased need for repair of weapons and military equipment and provision of logistics”. Therefore, the government wants to take “special financial measures”.

What powers does the government ask for: temporary activation of mobilization capabilities and facilities
release of tangible assets of the state reserve establishment of particularities and legal regulation of labor relations in individual organizations, including the procedure and conditions for working “outside the fixed working hours”, at night, on weekends and non-working holidays, providing annual paid holidays.

Mr Lukashenko has said that Belarus and Russia have not yet “equated” Western air force training in the use of nuclear weapons, they have only taken “half a step”.

“They fly, they are trained. Why are they being trained, why are they carrying training flights with aircraft that can carry nuclear weapons? To put a nuclear bomb on the plane tomorrow and drop it where it should be. Therefore, we have not yet given the answer.

“We must be ready to use nuclear weapons.”

Mr Lukashenko added that there were no nuclear munitions depots in Belarus but that “there is a need to be prepared for any developments and to keep the gunpowder dry”.

“We have to be ready. We believe. But we have to keep the gunpowder dry… And we do not need to make fun of it, to shout that Putin has taken over Belarus, he is doing what he wants. “We have a coherent, sensible policy of the two states, for which McKay and Lavrov are responsible first and foremost,” he said.