Vogue photoshoots are featured in nearly every edition of SPOTM because this “iconic” magazine has been owned and operated by the occult elite for decades. Most countries and regions have their own edition of Vogue – an efficient way of diffusing the elite’s agenda in local markets. With that being said, Vogue probably reached a new low in July when the magazine mixed war and fashion in a bizarre photoshoot that raised more than a few eyebrows. 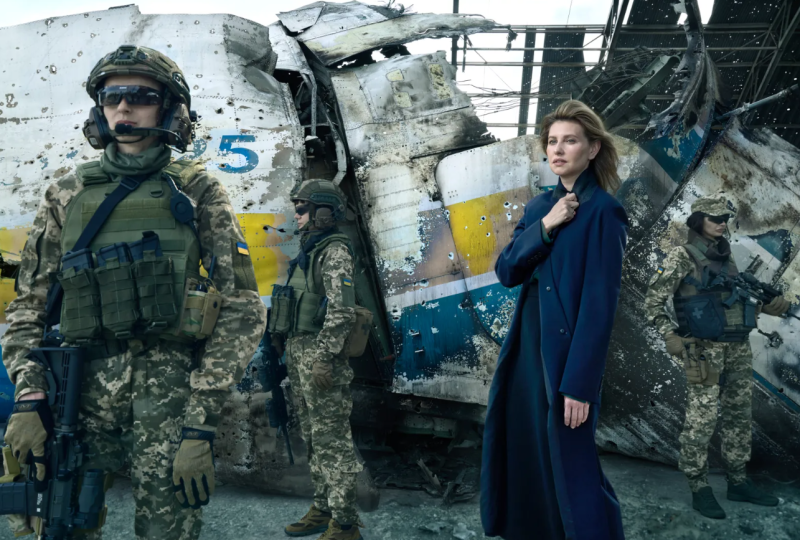 Titled “Portraits of Bravery”, the photoshoot features Ukrainian first lady Olena Zelenska posing for the camera wearing various fashion brands … with war in the background. Immediately after its release, critics stated that the photoshoot glamorized war. That’s not far-fetched at all. The pictures literally mix war with the glamour of fashion and celebrity. 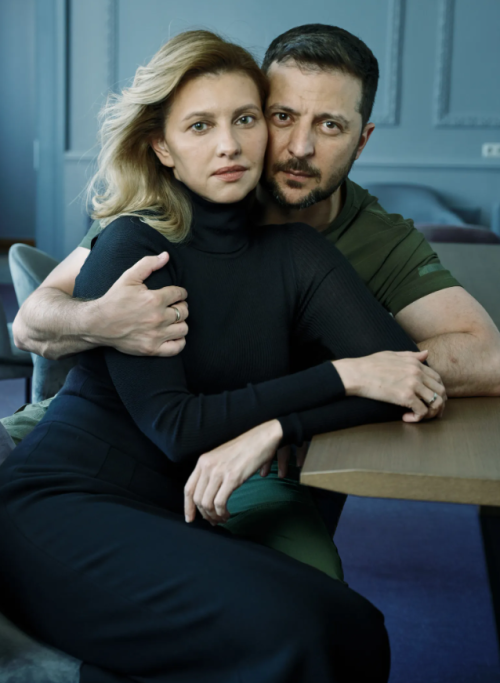 Zelenskyy and Zelenska pose for Vogue as if they were the hottest celebrity couple. I mean, he’s an ex-actor and she’s an ex-screenwriter so they know all about showbusiness. 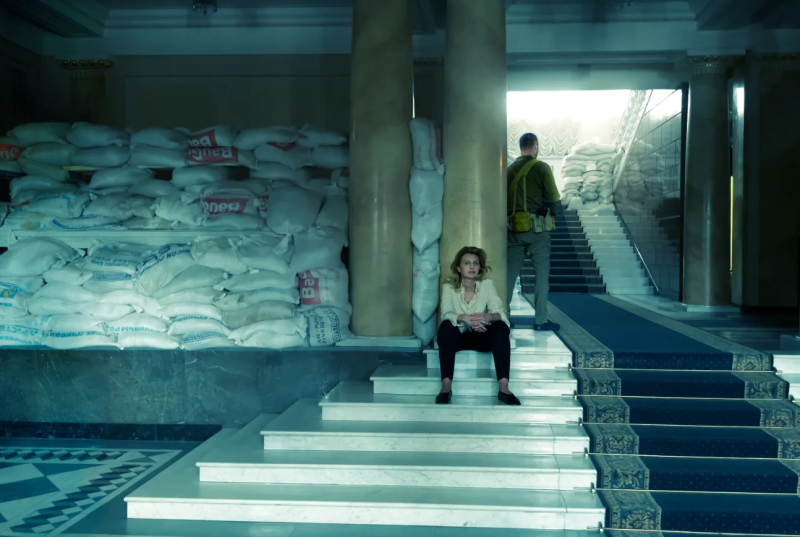 The mere idea of posing for fashion pictures as people are suffering shows how the elite is completely disconnected from reality.

Speaking of disconnected from reality, Bella Hadid is yet another celebrity that released an NFT thingy no one cares about. The video selling it is replete with Monarch programming symbolism (exactly like Madonna’s NFT which was featured on a recent SPOTM). 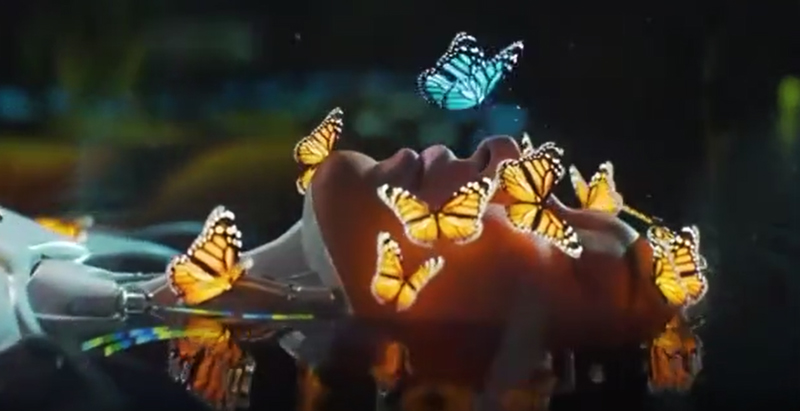 The video is all about Bella being covered with Monarch butterflies. The name: Cy-bella. Because she’s a cyborg – a symbolic way of portraying an MK slave. Because cyborgs are programmed. 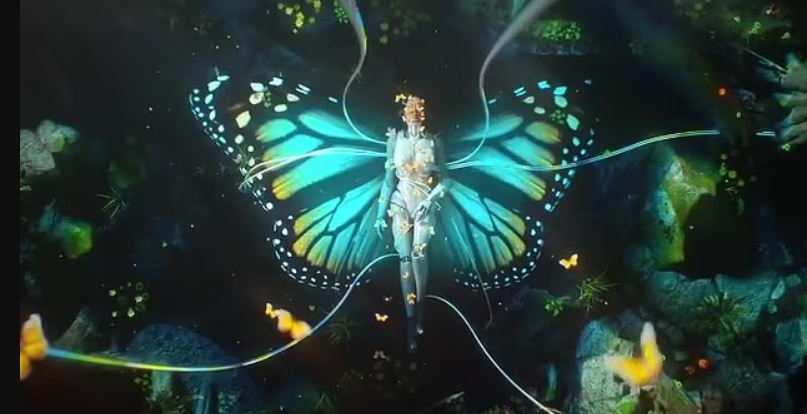 Bella turns into a giant Monarch butterfly with “wires” coming out of her. I don’t think they can get more blatant with this MKULTRA stuff and most people still do not see it.

Speaking of industry slaves, Lil Nas X has turned into a male version of a Beta Kitten slave. 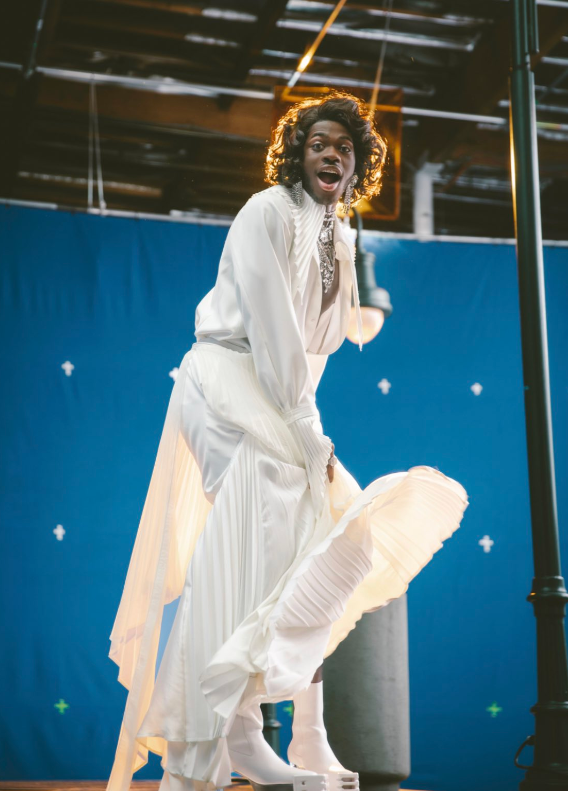 In my article about Marilyn Monroe, I explained how she was the prototype of the Sex Kitten industry slave. Since then, I posted countless pictures of female celebrities who had to “channel” Monroe because they’re modeled after that same prototype. In this weird gender-blurring world, Lil Nas X is undergoing the same treatment as female industry slaves. God knows what kind of industry creeps this guy has to deal with. 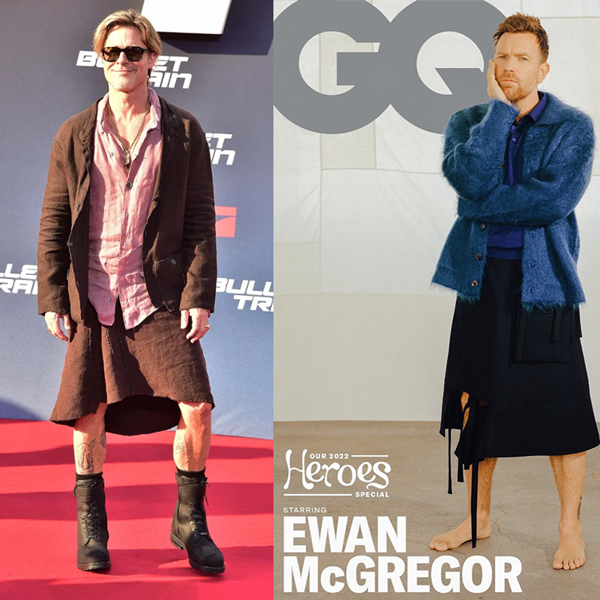 Brad Pitt and Ewan McGregor are two aging actors who desperately want to remain in the good graces of the entertainment industry. So, in the past weeks, both of them wore skirts. That’s the kind of humiliating stuff they have to do to remain relevant. It’s a sign of submission. Bonus absurdity: McGregor’s pic was in GQ’s “Heroes” special.

A few months ago, I devoted an entire article to a disturbing photoshoot sexualizing 16-year-old Cruz Beckham. I concluded by predicting that the spotlight will require sacrifice and submission to the agenda. Now his brother Romeo has to go through the same crap. 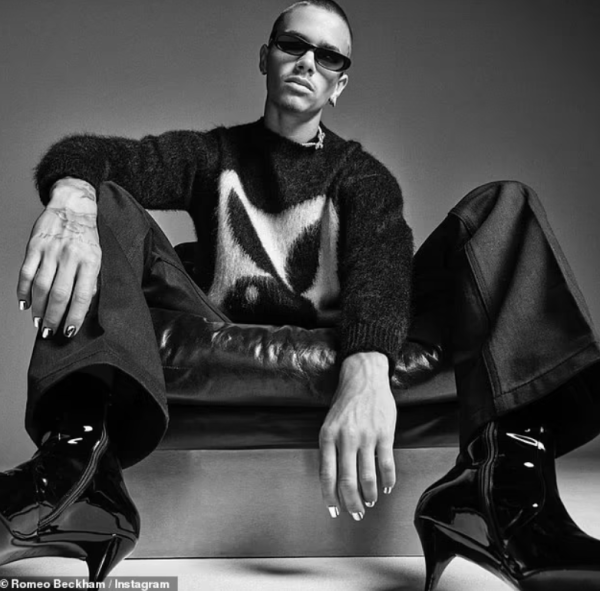 Romeo posed wearing women’s boots and painted nails for a photoshoot. “Bend it like Beckham” now means bending to the gender-blurring agenda.

Another industry slave that’s been discussed at length on this site is Lil Uzi Vert (pronounced Lil Lucifer). Nearly everything he ever did contains satanic symbolism and it keeps getting worse. 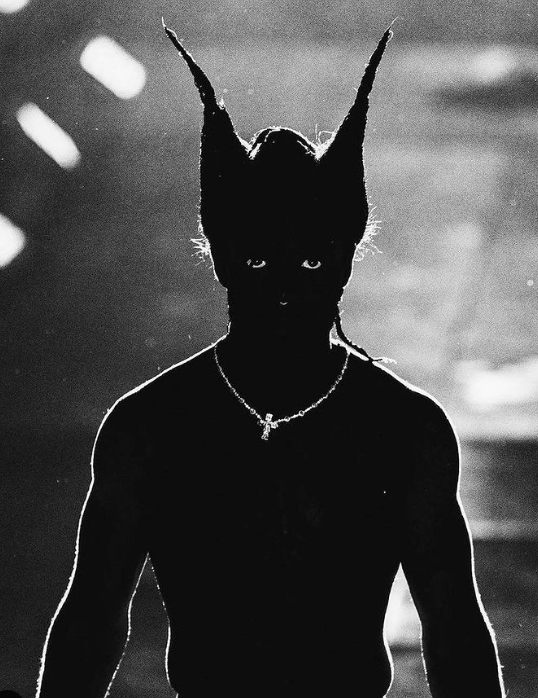 In this pic posted on Instagram, Lil Uzi Vert basically channels Baphomet – the androgynous horned “god” of the occult elite.

If you need further proof that he’s all about complying with the elite’s agenda, the media recently announced (with great enthusiasm) that Lil Uzi Vert’s pronouns are now they/them. Complete and utter BS.

Speaking of complete BS, Demi Lovato recently went back on her “brave” and “courageous” decision of going by they/them. In past SPOTMs, I highlighted how Demi was completed confused about this whole non-binary thing – as if it wasn’t her idea in the first place. Of course, she didn’t, she’s an industry slave. And the symbolism surrounding her new album keeps proving it. 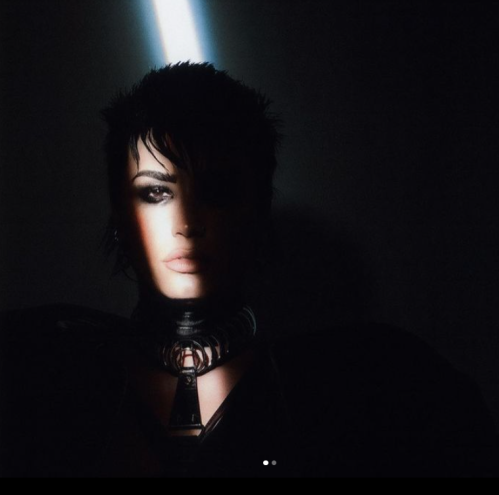 The promotion of her latest album HOLY FVCK is all about satanic/occult elite symbolism. In a new promotional pic, the light forms a very blatant one-eye sign, indicating that she’s owned and has no control over her life or career. 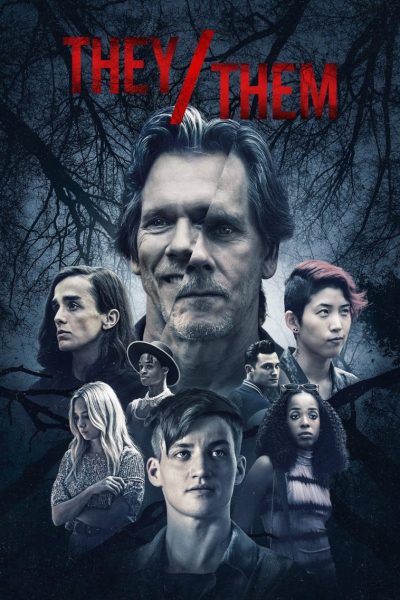 Hollywood jerks are so obsessed with pronouns that they’ve even made a movie named They/Them starring Kevin Bacon. Taking place in an LGBT conversion camp, the movie is pure woke garbage. It has 29% rating on Rotten Tomatoes because people absolutely hate this stuff. As if the name itself wasn’t enough to keep you far away from this movie, the poster features a convenient one-eye sign to make sure you understand this is pure elite indoctrination.

As seen in previous editions of SPOTM, Beyonce is back with a new album and, as usual, mass media is literally gushing over her. News outlets particularly loved the fact that she removed the word “spaz” from one of her songs after some people decided that the word was offensive. Yup, media really loves the Orwellian activity of blacklisting words.

In the many articles spazzing out over Beyonce, this is the picture we usually see. 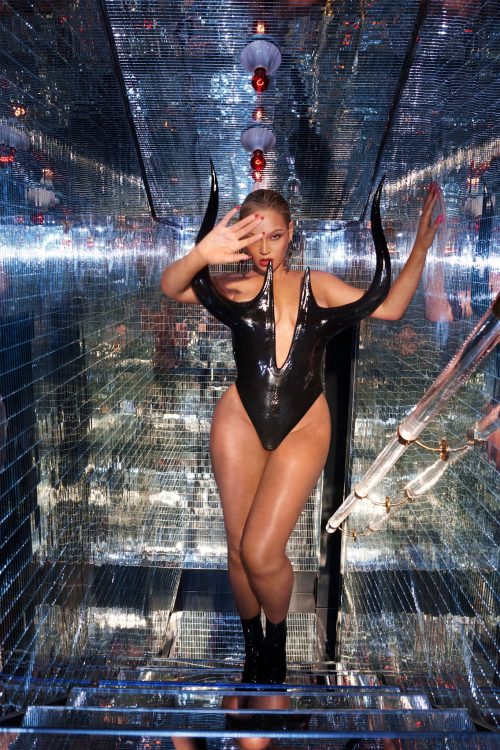 Beyonce makes a blatant one-eye sign while wearing an outfit that’s highly reminiscent of Baphomet’s head. The message: She’s still an industry slave. The title of her sinly Break My Soul says it all. 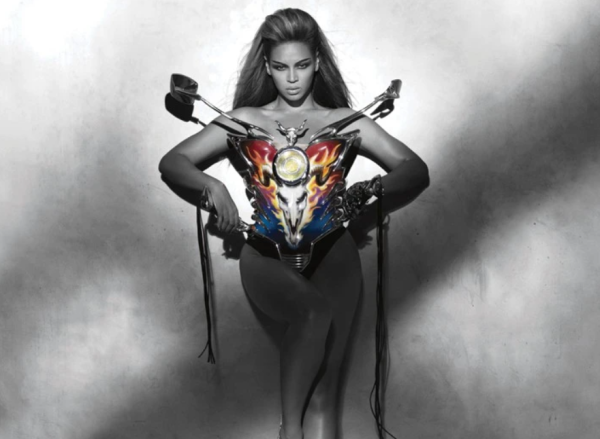 Over 13 years ago (yes 13), I shocked many by explaining how this goat-head outfit was a tribute to Baphomet. Nothing has changed. 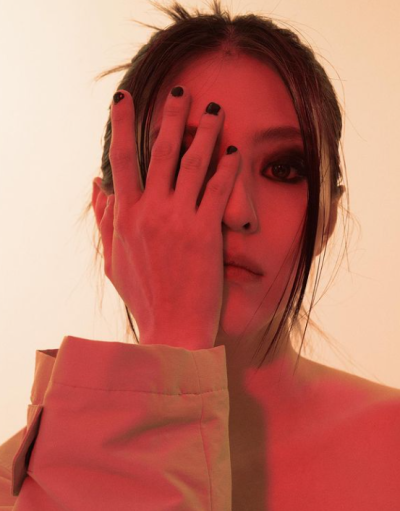 This is Korean actress Han So-Hee. As you can see, she’s doing a blatant one-eye sign. This pic in itself is rather uninteresting but it is necessary to understand these next pics.

So-Hee recently posted drawings on Instagram that caused her fans to worry about her well-being. Because they’re rather disturbing. 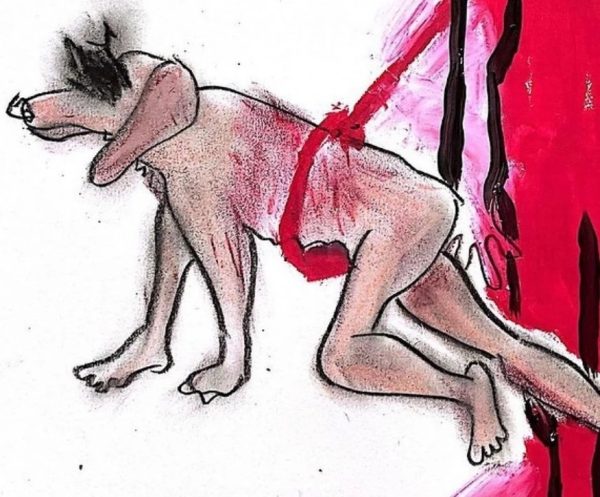 This bizarre drawing depicts a dog-like person that’s held by some kind of red leash around the stomach. Bizarrely enough, So-Hee is currently recovering from an injury while filming an upcoming drama. Did she actually undergo some type of trauma-based programming? 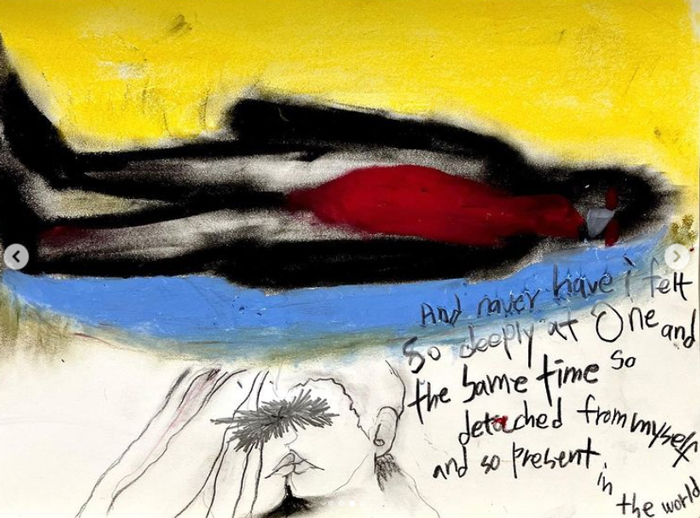 In another disturbing drawing, there’s a silhouette with red eyes and a blotch of red on the torso. Underneath, Albert Camus’s quote “And never have I felt so deeply at one and the same time so detached from myself and so present in the world”. That’s a rather poignant way of describing the dissociation of MK slaves. The art style of her drawings is reminiscent of Kim Noble’s body of work (an MK slave who described her abuse through horrific yet revealing paintings). 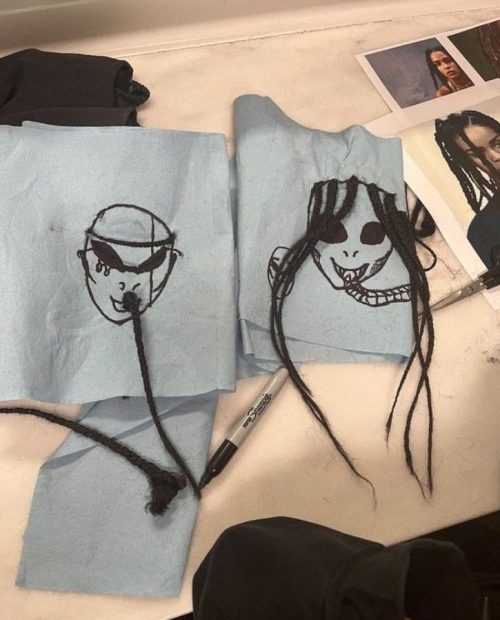 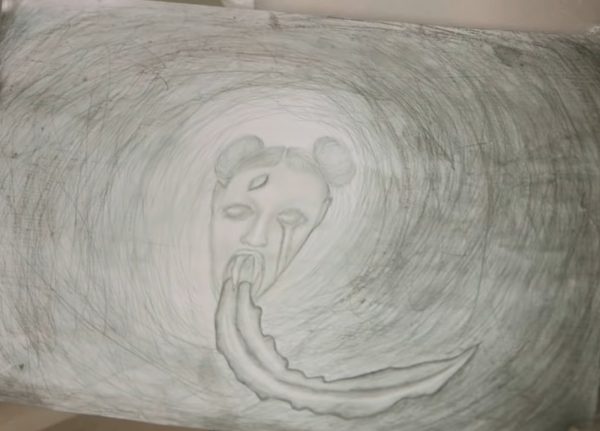 In a previous SPOTM, I posted another drawing by North West with similar features. What’s with the scarred head? I guess that’s the result of having to live in the Kardashian coven.

Speaking of witch (not a typo), here’s Florence + the Machine. 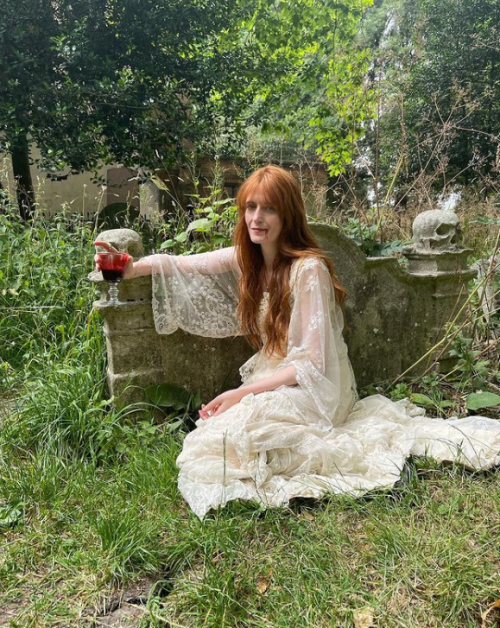 Florence sits next to a skull-adorned tombstone and drinks a cup of … blood. And there’s some blood dripping down the side of her mouth to make sure you understand this is not wine or something. They’re blatantly telling you that they’re blood-sipping cannibals.

Cannibalism is so everywhere that the New York Times posted an article titled “A Taste for Cannibalism?” with a subtitle that says “we’ve never looked so delicious — to one another.” As if that wasn’t disturbing enough, here are some images featured in the article. 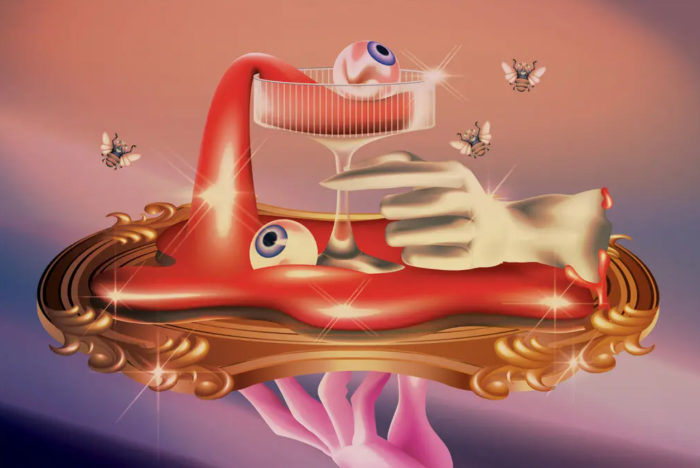 Eyeballs, a severed hand, and a cup of blood. This is the kind of “art” the occult elite display in their mansions. 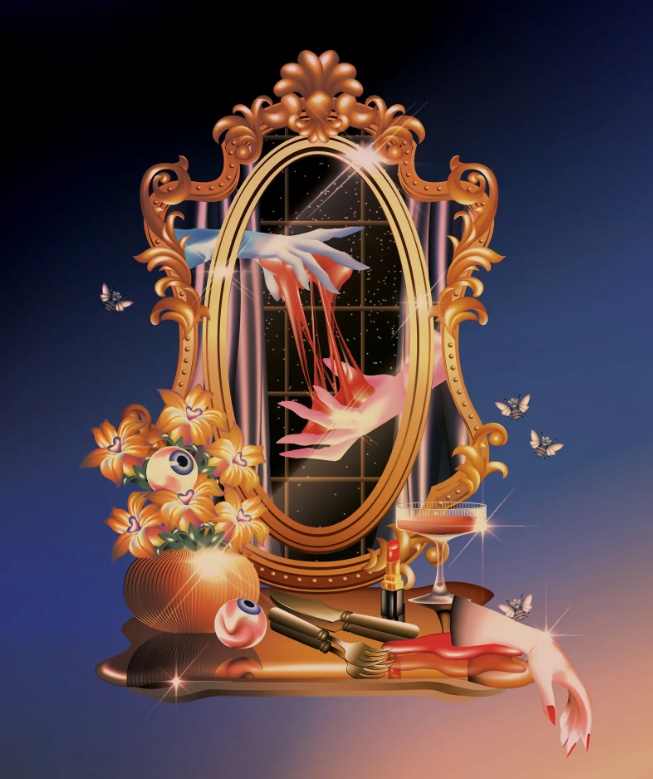 This witchcraft-y image alludes to the fact that cannibalism is often part of dark occult rituals. In case you didn’t know, the New York Times is an elite-owned propaganda outlet and this article is part of a wider agenda of normalizing and even glamorizing cannibalism – a part of the elite’s sickness. 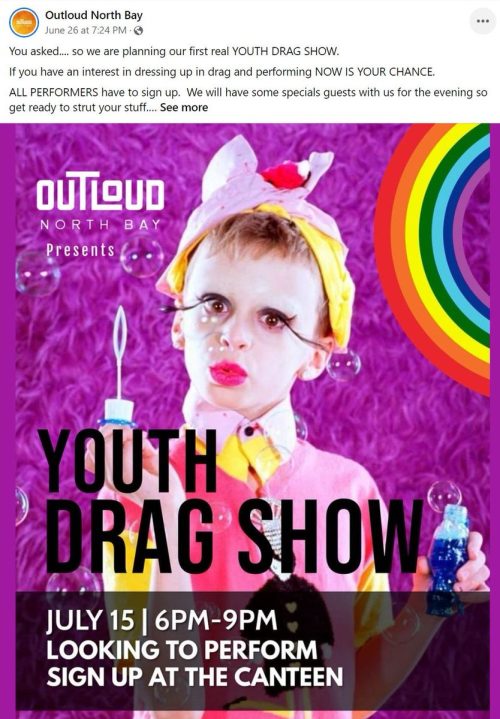 In this Facebook post, an organization was looking for children to perform at a youth drag show. The ad said: “get ready to strut your stuff”. Here’s a crazy thought: Whoever thought of recruiting children to have them perform in a highly-sexualized drag show is a pedophile and needs to be arrested.