‘We’re about to go into a dark winter. A dark winter,’ claimed Democrat candidate Joe Biden.

Have an important tip? Let us know.EMAIL US HERE.

A 2001 war game simulation of a biowarfare attack in the United States carries eerie similarities to the current coronavirus pandemic and lockdown that devastated the planet.

Interest in the Dark Winter Bioterrorism Exercise, carried out June 22-23, 2001 at Andrews Air Force Base, peaked after 2020 Democrat presidential candidate Joe Biden made a reference to an upcoming “dark winter” in the United States, referring to the possibility of another coronavirus outbreak this winter.

“We’re about to go into a dark winter. A dark winter,” Biden said at Thursday night’s debate. “And he has no clear plan, and there’s no prospect that there’s going to be a vaccine available for the majority of the American people before the middle of next year.”

President Trump refuted Biden’s comments, optimistic the US can handle the virus and open up safely by winter, but Biden’s word choice is bizarre given the many parallels between the simulated outbreak scenario and the current situation.

The Dark Winter Exercise, run by the Johns Hopkins Center for Civilian Biodefense, Center for Strategic and International Studies, ANSER, & the Memorial Institute for the Prevention of Terrorism, was an extensive simulation that attempted to envision federal government response to a nationwide smallpox outbreak.

Here’s a summary of the exercise, via the Center for Health Security:

The Dark Winter exercise portrayed a fictional scenario depicting a covert smallpox attack on U.S. citizens. The scenario is set in 3 successive National Security Council (NSC) meetings which take place over 2 weeks. Former senior government officials played the roles of NSC members; media representatives were among the observers and played journalists during the mock press conferences. The exercise was held at Andrews Air Force Base, Washington, DCSHOW LESS 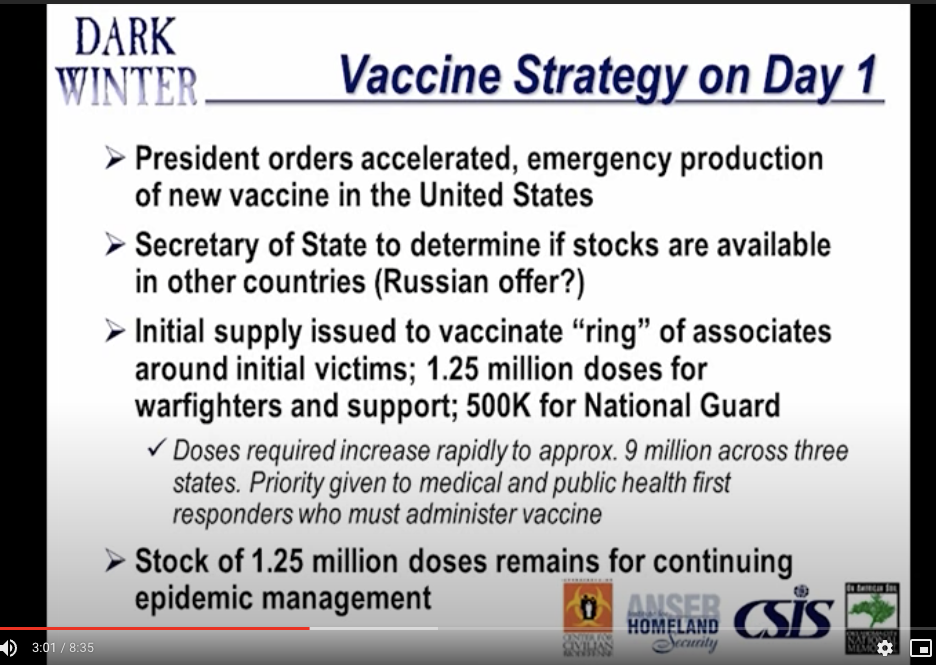 The exercise, complete with a 44-page script, simulated several days of the outbreak, throughout which the government scrambled to stop the spread, including developing a new vaccine and distributing it. 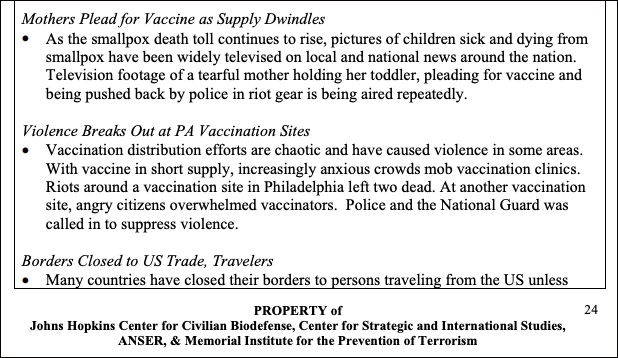 A video presentation used during the scenario imagined riots over vaccine and medical supplies, a collapse of the national economy and “desperate measures” the government is forced to take, including considering the implementation of martial law.

A fake news report in the exercise features a biowarfare defense expert using the term “dark winter” as he tells a reporter there’s not enough vaccines to go around.

“Meaning we don’t have enough vaccines for the United States?” the reporter asks.

“We don’t have sufficient stockpiles for the people in Oklahoma, Georgia and Pennsylvania, much less for the entire US population,” expresses the fake expert.

“Well that certainly doesn’t sound encouraging,” the fake reporter says. “What do you mean exactly?”

“Angie, it means it could be a very dark winter for America,” the man says.

Another PowerPoint slide from the video discusses waiving FDA regulations for vaccine manufacturers and assuring “indemnity for producers,” while another slide later in the outbreak predicts 200 people dead from the vaccine itself “out of millions vaccinated.” 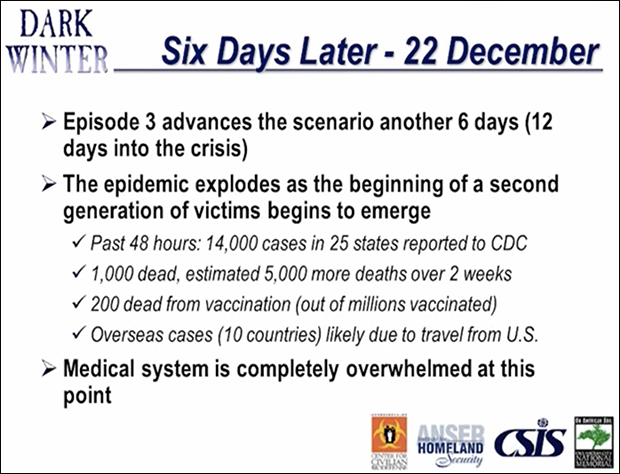 Near the end of the scenario, when all hell has broken loose, the exercise deals with having to impose martial law in the US, details of which are described in the Dark Winter script (pg. 28). 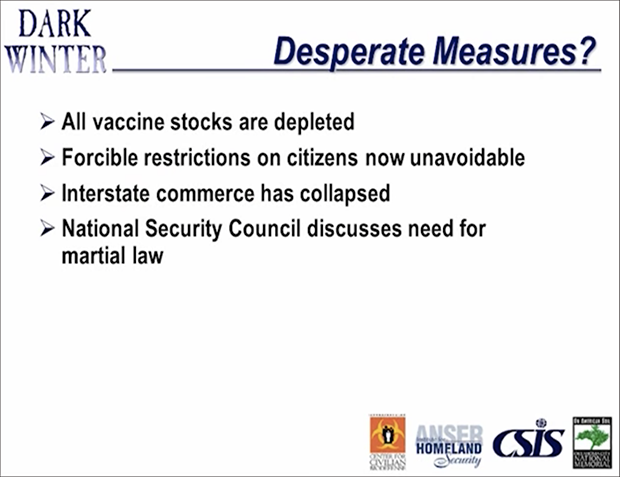 “Options for martial rule include, but are not limited to, prohibition of free assembly, national travel ban, quarantine of certain areas, suspension of the writ of habeas corpus [ie, arrest without due process], and/or military trials in the event that the court system becomes dysfunctional,” the scenario states. 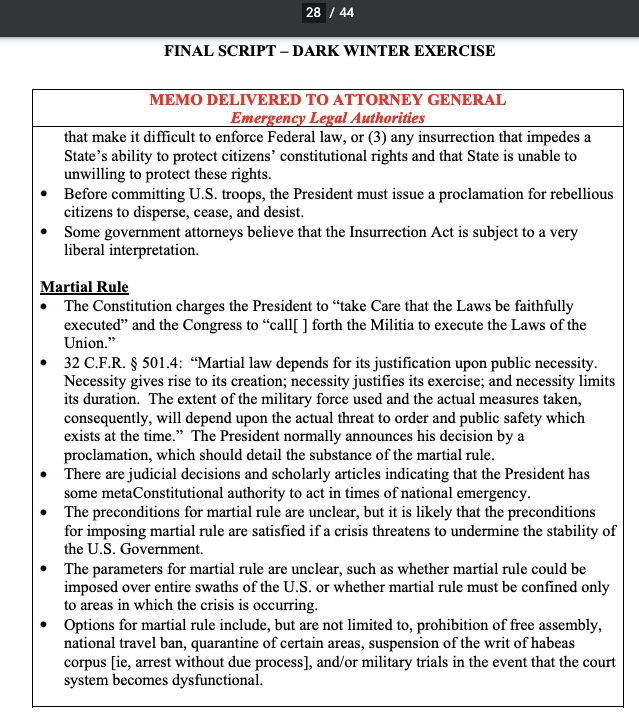 Elsewhere in the exercise’s findings, which summarizes “lesson’s learned,” participants are warned, “Forcible constraints on citizens may likely be the only tools available when vaccine stocks are depleted.”

Given the nightmare scenario laid out in the war game simulation, let’s hope this wasn’t what Biden was referencing when he used the term.


“Dark Winter” more than just a colorful phrase. Operation Dark Winter is something Biden knows about — you should, too.