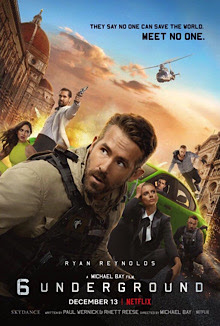 Ryan Reynolds, the star of 6 Underground, a Netflix original movie that premiered Dec. 13, 2019, is a master of the stone-faced one-liner.

In a movie like Deadpool, he effectively conveys emotion even as he’s mouthing a one-liner that elicits laughter and probably makes the viewer cringe at the same time.

That skill or talent—whatever you wish to call it—must be why he stars in this flick. In fact, the movie may have been built around him for that ability.

Six individuals from all around the globe, each the very best at what they do, have been chosen not only for their skill, but for a unique desire to delete their pasts to change the future.

6 Underground is one action scene after another, stitched together with Reynolds and his one-liners.

The opening car chase sequence is…well, let’s just say some stunt drivers got a big payday from the lengthy scene that left little room for charaterization.

In fact, characterization was tossed in as an afterthought later in the movie, rather than making it a way of letting the viewers get to know the characters and learn why they were doing what they were doing—which was preposterous in the extreme.

Rather than creating a story about a character/hero that the viewer could like and root for, the movie depended on Reynolds’s onscreen personality in similar movies to make him, as hero, appealing to the viewer.

Sorry, Mr. Reynolds, Mr. Bay, and the other talented cast members. Thumbs down from me. This movie will probably appeal to people who like loud crashes, mind-numbing action sequences, stunts of all kinds, and disengaging the brain while watching. The rest of you can probably find something better to do with 2 hours and 8 minutes.

Loading...
"Not by might, nor by power, but by my spirit, saith the Lord of hosts." Zechariah 4:6
Read it..
BEFORE IT'S NEWS
SIGN UP FOR OUR NEWSLETTER
Today's Top Stories
Sarah Westall: Whistleblower Brutally Beaten, Coronavirus Explained From Chinese Healer, Hired Mercenaries
The Dollar Will Collapse Within Weeks! What Will Replace It? - Must See Video!
Q: Hollywood Is Burning! Is Barron Trump Q? Barry's Belated Impeachment? Best Is Yet 2 Come! - Great Video
Jason A - Unexplainable Events Happening in 2020!
The History And Mission Of The Nazi-Illuminati Bush (Scher(f)f) Crime Family
David Abel Exposed As Crisis Acting Freemason On Board Diamond Princess Cruise Ship
Mark Taylor: Q! Gloves Are Off, Fight Is On
Billy Meier Predictions and Prophecies Are Now Being Proved Correct
Q3649: It's Going to Be Biblical! An Epic Response to Mayor Pete Saying We Can't Be Christians! Great Video!
Worldwide Virus Alert! Millions Infected & Spreading! - Must See Video!
Loading...
Featured
Bombshell Secrets Revealed! Behind the Veil of Mass Deception: Just How Fake Is the [Fake News]?! Great Video!
"Turn Off Your Camera and Step Out of the Car" New York State Extortion Stop
Health Officials Prepare for COVID-19 Throughout USA.
Did a Senior Chinese Military Intelligence Officer Call the Coronavirus a Hoax or Did Dean Koontz Write A 'Novel' Virus Sequel?
The 5G Trojan Horse: What You’re Not Being Told
‘Whom the gods would destroy – they first make mad’ – COVID-19 Hysteria goes global
🚨CORONAVIRUS: Who is Paul Cottrell; an embedded Gov’t Plant / Agent, Zionist Schill (“Snake in the Grass”)?
Whistleblower found dead
Q: You Have Come Far, Anons (Patriots)! You Are Ready! A Public Awake Is Their Greatest Fear! - Great Video
US Now Admitting Coronavirus Has Broken Containment Beyond China! - Great Video!