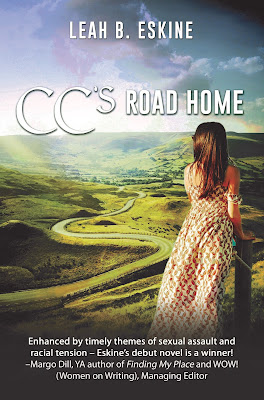 Today we are excited to announce a reader review event featuring the book CC’s Road Home by Leah B. Eskine. Read the reviews of this captivating young adult novel and an interview with the author, while also entering to have the chance to win your own copy of the book.
First, about the book CC’s Road Home:
Desperate to forget her past, sixteen-year-old CC arrives on her grandparents’ North Louisiana farm and asks, “Will I ever feel normal again?” She brushes aside her family’s attempts to break through her isolation and angst and hides her darkest secret from her beloved Gran. Even CC’s vivacious new friend, Addy, and a summer romance with steely-eyed Eric can’t persuade her to reveal what happened last winter in New Orleans.
It’s 1964 and as Beatlemania and Motown captivate America’s youth, this young woman encounters small-town racial tension, erupting sexual assault, and ignorance towards her beloved brain-injured Uncle Bud, all issues fueling the dynamic conflicts in Leah Eskine’s debut novel.
What WOW readers said:
“CC’s Road Home, takes place in a rural Louisiana town in the 1960s. A sixteen-year-old Cicely visits her grandparents when she is left there by her mom. You get a real sense of her dysfunctional relationship with her alcoholic mom and how that affects her life and the decisions she makes.
The story is a heart-wrenching representation of how teen pregnancy was dealt with back then. These teen girls who found themselves in one of the most emotional and vulnerable situations of their lives had no recourse but to be shipped off to a strange place so they could have their babies, ‘out of sight.’ These poor girls are were forced to sign away their rights and give their children up for adoption.
Within the pregnancy storyline, another aspect of the story is played out within the tumultuous times of the 60s, dealing with racial inequality and racism.
The novel’s storyline is excellent and fleshed out however there are some issues throughout the novel. There are plots that get brought up but never resolved. Some of the dialogue is awkward and fragmented which pulls the reader out of the story.
With that being said, the book gives the reader many emotions throughout its story and finally comes to a bittersweet end, beginning with Cicely meeting Adrianna. It’s sweet and tear-jerking but it helps the reader understand that Cicely is healing the scars of her past so she can live for her future.”
- Review by Stephanie Anne
“There are a lot of tough things covered in this book – teen pregnancy, racism, ableism, and sexual assault. THAT said this book is amazing and emotional and just captures your attention from page one. CC is a teen facing a world she doesn’t yet have the maturity to navigate easily, and watching how she handles everything will tug at your heartstrings. A great coming of age book for young and not so young adults alike.”
- Review by Liliyana Shadowlyn
“I enjoyed the time period (1964) of this novel – it’s important for young people to have options other than contemporary settings. The author has done a good job of tackling tough topics like racism, family dynamics, and teen pregnancy, and I really enjoyed many of the characters – especially Gran, Johnny, and Uncle Bud.”
- Review by Michelle Cornish
“CC’s Road Home is a good young-adult historical fiction book that offers readers a glimpse of the 1960s. While the book deals with many serious issues, including racial tension, young readers will enjoy the journey with the book’s main character, CC. Without giving away too many details, I can say the book is superbly written. Eskine captures the reader’s attention from the start and doesn’t let go until the last page.”
- Review by Karen Brown Tyson
“YA Historical Fiction is a step back in time that the youth of today need to be reading.
Set in 1964 when Elvis and the Beatles were hot, 16-year-old CC is exiled to her grandparents’ farm. Her mother has all but disowned her, she’s no longer attending school, and is ashamed of her past.
The farm life, however, is good for CC. She manages to make new friends and reconnect with family while finding her place in the world.
Like all teenagers, she has a lot of growing up to do that nothing but time will remedy. In order to find peace within herself, she will have to experience a few more hardships before she will see things more clearly.
With racial tensions, social pressures, and self-doubt, CC will find the courage to stand up for herself and to own her mistakes in order to grow as a person and find the home where she is happiest.
Dealing with some serious issues, this book handles teenage pregnancy, racial tension, and physical assault delicately enough for youths to read and learn from.
Leah B. Eskine’s debut is a dear story that I’m sure will be cherished by many.”
- Review by Kelly Srgoi
“The author did a great job describing the setting of the story which is the 1960s. While there are so many differences from that generation and today’s young adults, I think the readers will be able to appreciate some timeless values. Relatable and relevant, this story can capture one’s heart from the first few pages till the end.”
- Review by Rozelyn De Sagun
“Such a delightful historical setting for this book tackling the tough subjects! I thoroughly enjoyed both the 60s setting as well as the young adult challenges and decisions facing CC. CC’s Road Home is charming and the main character (young CC) is endearing though resilient. I loved every page of this expertly written novel and plan to read more books by the talented author Leah B. Eskine.”
- Review by Crystal Otto
CC’s Road Home is available for pre-order on Amazon.com, Google Books, Bookshop.org, and BooksaMillion.org. You can also add it to your reading list on GoodReads.com.
About the Author, Leah B. Eskine 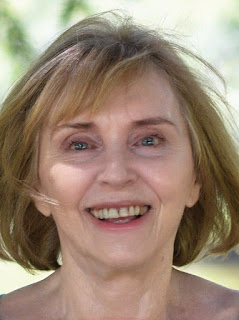 Leah grew up in small southern towns in Louisiana and Texas and moved to New Orleans in her twenties. She gravitated early on to teaching high school students and her stories are inspired by the young people she encountered. Her first novel CC’S Road Home is set to release in January 2021. Leah has written short stories and published articles in educational journals, but CC’s Road Home is her debut novel and explores the theme of the importance of family endurance in spite of great obstacles.

Leah lives with her best friend and husband, Paul, and their two rescue poodles. When she’s not writing, Leah enjoys country music, sixties rock, walking the dogs at dusk, lunch at neighborhood restaurants, movies, and reading – a lot.
Leah would love to stay in touch with you at www.leaheskine.com. Follow her on Twitter @Eskineleah, FB @Leah B. Eskine and Instagram @eskineleah.

WOW: Congratulations on your book CC’s Road Home. I loved hearing how you decided to write this novel, based on a conversation with your daughter. Can you tell us a little bit about that conversation and where your idea came from?