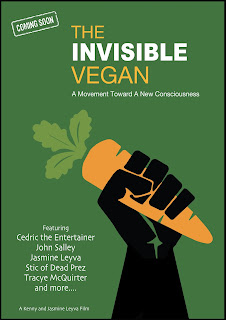 We are excited to announce a unique blog tour featuring the film The Invisible Vegan, an eye-opening documentary that we are so honored to share with you.
About the Film

The documentary begins with the personal story of Jasmine Leyva, a 30-year-old Black actress and filmmaker currently based in Los Angeles. Over the past seven years, Leyva has committed herself to veganism, both in lifestyle and research. Taking Leyva’s unhealthy childhood growing up in Washington, DC as a point of departure, the film interweaves her narrative with the professional and personal experiences of a prominent group of vegan activists. The film integrates interviews with popular culture luminaries including Cedric the Entertainer (actor and comedian), John Salley (former NBA player and wellness advocate), and Clayton Gavin (aka Stic of the hip-hop duo Dead Prez).

Statement by the Director, Jasmine Leyva 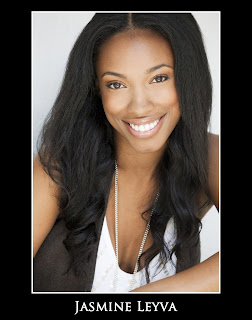 The Invisible Vegan is my first feature length film documentary project, and its emergence stems not only from my commitment to veganism, but also my investment in the possibilities of film as a medium for raising awareness, inspiring consciousness, and creating collective social experiences. It is my hope that the film will receive the widest possible audience, and catalyze productive debates about the future of food in African-American culture. I feel tremendously privileged and humbled to be working with a group of talented people whose opinions do not always reflect my own, but nonetheless, sustain the very spirit of dialogue on which this film is premised.

You can watch the film right now on TubiTV and stream on Amazon Prime.

Activist, actress, and documentary filmmaker, Jasmine is passionate about veganism, social justice, and telling her own stories. With a Bachelor of Arts in TV, Film and Media and a Master of Fine Arts in screenwriting, Jasmine is unapologetically an artist. She has worked as an associate producer on a NAACP-winning docuseries entitled Unsung and has written and produced for Being, a docuseries highlighting dynamic entertainers in film and music.

Jasmine ultimately decided to let go of her nine-to-five and focus on her goals with no boss except for her own creativity. She went on to produce her own feature-length documentary, The Invisible Vegan, a film that chronicles her personal experience with plant-based eating. The film also explains how plant-based eating is directly linked to African roots and how African-American eating habits have been debased by a chain of oppression.

You can find her online at:

— Interview by Nicole Pyles
WOW: First, thank you so much for taking the time to chat with us today! What inspired you to create the documentary The Invisible Vegan?
Jasmine: There were a lot of health documentaries coming out, and as much as I loved them, most of them revolved around white men. I grew tired of seeing people of color tokenized or brought in as the person that needed to be shown the way, while ignoring people of color that paved the way. So I was inspired to create a film that gave people like myself a sense of pride.
WOW: I loved what you said in a recent interview with Authority Magazine, where you said, “It was at that moment that I told myself to stop waiting for other people to give me permission to do what I love.” So often creative artists have a hard time giving themselves permission to pursue their passions. How did it feel to finally pursue your passions?
Jasmine: Everybody has rockstar dreams when they are young, but if you don’t come from privilege, adulthood has a way of humbling you and your career expectations. During that process, you have to make a choice. You can choose a practical life that will provide more stability or you can sacrifice stability for something bigger. I chose to sacrifice and it’s a decision that continues to scare me, but I’ll take my fear of the unknown over unhappiness any day because if I was married to a career I hated I would just be one more miserable person in traffic and that’s my biggest fear.
WOW: I completely agree – unhappiness is far worse than fear of the unknown. I was also so inspired by the grassroots efforts you did for putting together the resources to make your film! What advice do you have for people who are afraid to put themselves out there due to lack of help or financial resources?
Jasmine: True art doesn’t come from money alone. Art comes from creativity, and not having everything gift wrapped for you on a platter, should push your creativity to max, not hinder it. Not to mention we all walk around with unlimited knowledge in our pockets. If you want to know how to make a film with a lack of resources, Google has thousands of answers. And if the first hundred suggestions don’t work, try the next hundred. That’s the kind of spirit that will get a film made no matter how much is in your bank account.
WOW: How inspiring! You’ve become an incredible activist for health, social justice, and veganism. What have you learned about putting your voice and your message out there?
Jasmine: It takes bravery to put yourself out there because the moment someone disagrees with you they are ready to cancel you or unfollow you. It’s really childish. I’ve done work on myself where I no longer need people to agree with me, but a lot of people do not know how to lovingly accept an opinion that is different than their own. So as a voice in this space, it was important for me to learn when to walk away. My job is only to convey the message, not force people to accept it and when I sense a person being negative to new ideas, I just politely unplug.
WOW: It is a huge challenge to do that, and good for you for knowing how! Why do you think it’s important for there to be diversity in storytelling (whether that storytelling is through film, art, or literature)?
Jasmine: When stories are told through the same lens, not only does it get boring, it does a disservice to the population by limiting their perspectives about different groups. Even in fiction, art and truth are linked and when artists continuously create worlds without people of color, people with disabilities, people with larger bodies and LGBTQ members, art loses its beauty and becomes a damaging lie.
WOW: Yes! That’s absolutely right. Can you tell us a little bit about what you are working on now?
Jasmine: I am currently working on a documentary about food disorders and I chose this topic because the narrative has been culturally hijacked. We know so much about the size 0 white woman with anorexia, whose parents had money to send her to a treatment facility, but nothing about the size 16 woman of color binge-eating to deal with the traumas she is going through at home. It’s important that we find ways to retell a lot of the stories we have been told over the last few decades to include everyone who was left out.
WOW: I can’t wait to see what you come out with next. Thank you again for joining us today!