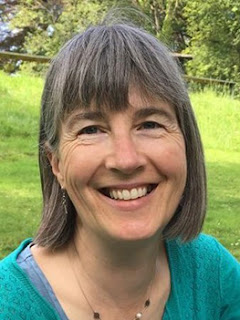 Deborah Tomkins lives in the historic city of Bristol, UK, with her family. She gained an Honours degree in French & Linguistics, then became a dictionary writer, before educating her children at home for 15 years. She’s passionate about the natural world, and now works for a UK environmental charity.
As a child Deborah loved reading, and secretly harboured the idea of writing fiction, but didn’t begin until her late forties. She writes novels, novellas and short stories, in inconsistent bursts of activity. Now We Are Seven is the first story in a science fiction novella-in-flash set in an alternate universe. A contemporary climate fiction novel has reached long and short lists in competitions, but has yet to find a publisher.
In 2017 Deborah founded the Bristol-based writing network, Bristol Climate Writers. She is also an author at ClimateCultures.
If you haven’t read “Now We Are Seven” click through and then return to learn more about her work and climate writing.
–Interview by Sue Bradford Edwards
WOW:  What was the inspiration behind “Now We Are Seven”?