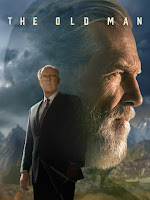 Usually, my husband and I juggle a bunch of shows on both cable On Demand and streaming, so I was disappointed that there didn’t seem to be many new or returning cable shows this summer. Then, we heard about The Old Man on FX (and on Hulu), about a retired CIA agent who suddenly has to go on the run again. Wow, we are loving this show so far!

Jeff Bridges stars as Dan Chase (his current name), the “old man” of the title and the retired agent. As the first episode opens, his quiet life in a remote cabin with his two dogs is shattered when a gunman visits his house one night. He tells the local police it must have been an armed robber, but when they see the intruder had a silencer on his gun, they wonder. Dan immediately grabs his go bag–he was obviously prepared for just such an incident–and hits the road. On the way, he calls his adult daughter to let her know she may not hear from him for awhile. He also talks to Harold Harper, played by John Lithgow. Harold is also retired, as a Director of the FBI, and it’s clear the two know each other and have a long history. Harold warns Dan that an old nemesis is after him, with both the FBI and CIA involved. Harold ominously advises Dan to run so that old secrets will remain buried, but Dan doesn’t want to break all ties with his daughter, as Harold suggests. After a stunning encounter with the agents pursuing him, Dan holes up in a rental house he knows about, not realizing there is now a divorced woman on site, Zoe (played by Amy Brenneman). He is trying to rest and heal before he heads west, but she is a complication he hadn’t counted on. Meanwhile, the efforts to find him escalate within the FBI and CIA.

We have watched three episodes of this seven-episode season so far (since it is currently airing, that’s all that’s available so far; episode four will be released this Thursday), and we are totally hooked! Bridges and Lithgow are both outstanding in their roles, as is the supporting cast. Bridges in particular plays the role of the mysterious Dan with such emotional depth that you get pulled into his story. Some scenes flash back to when Dan was a younger man in the CIA, so the viewer slowly learns what happened in the past and why the agencies are so intent on finding him now. But Dan is a formidable opponent, even entirely on his own. Secrets (some shocking) are slowly revealed, and even when you aren’t entirely sure what bad stuff Dan did in the past, you’re still rooting for him! We are absolutely loving this action-packed and suspenseful yet warm and moving show and can’t wait to see what happens next.

The Old Man is currently airing on Thursday nights on FX, with episodes available both On Demand and on Hulu.