Is it hot enough for you? I think that must be a popular conversation starter in the summer.

Most of us take to the ocean or pools to cool off.

Did you ever wonder about the history of women’s swimsuits? I did.

For Friday Facts, here are some things I learned about Women’s Swimsuits or bathing suits as they were once called.

1. Women’s swimsuits have come a long way since the 1600′s when women in England wore bulky canvas garments at Bath. The garments were made to fill up with water to obscure the shape of their bodies.

2. Since women wore those costumes at Bath, they became known as bathing suits.

3. Those billowing bathing suits, not suitable for much except wading in the water, remained popular with women wearing high-necked, long-sleeved, ankle-length gowns into the 1800s.

4. Late in the 1800s, the bathing suits became a little more amenable to actually swimming, but they were still loose-fitting, ankle-length, with full sleeves, and were made of wool or flannel so as not to be transparent when wet.

Weights were sewn into the hems so that they would not rise up in the water. (By this time, men who previouslly swam nude, were required to wear drawers.)

5. Finally, in 1907, Australian swimmer Annette Kellerman arrived in the U.S. to perform as an underwater ballerina, a type of synchronised swimming. She wore a form-fitting one-piece tank bathing suit, a design she’d adopted from an English bathing suit for men. She was immediately arrested on Boston beach for indecent exposure because her tank suit showed her arms, legs and neck. 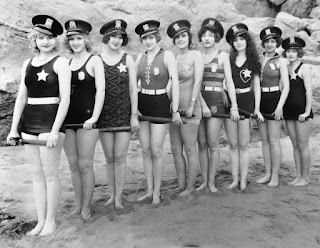 7. That was a turning point. After that, a practical one-piece maillot, a woman’s one-piece tank-style swimsuit named after a fashion designer, became popular for women.

From that “breakthrough,” the swimsuit became sleeker and more feminine, showing a woman’s curves.

8. Even though two-piece bathing suits existed in the 1930s, the bikini emerged after WWII.

According to the designer, material rationing after the war prompted the smaller two-piece who named it bikini for the island where the first post-war tests of the atomic bomb were taking place.

9. Bikini’s got skimpier and skimpier until Rudi Gernreich invented the thong bikini in the 1970s, a time when everyone wanted to be seen as sexy and sensual.

Women, rejoice that you can now wear a suit actually made for swimming—or for showing off your body you worked hard to tone.