Choirs throughout the world face extraordinary challenges at present. Effectively silenced for several months, they have been unable to sing together in rehearsal nor in the context of liturgical or concert performance. Even as countries begin, ever so cautiously, to emerge from lockdown, a considerable amount of debate has arisen surrounding the circumstances of viral transmission through singing. This panic was initially precipitated by the spread of the virus in a choir in the USA, pre-lockdown, with the assumption that it was the singing, rather than the lack of social-distancing, which caused this. A number of preliminary studies, including two carried out in Freiburg and Munich, demonstrate that singing is perfectly safe as long as sensible precautions are put in place. 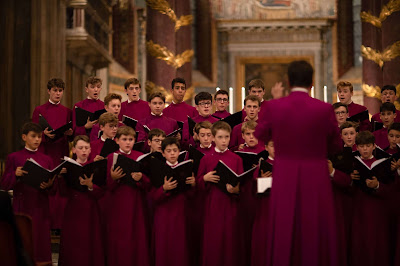 However, Britain’s choral tradition is now under major threat due to the UK government’s proposed guidance which will make it difficult or impossible for choirs to meaningfully rehearse or perform. Even though there is no scientific evidence to prove the dangers of singing, the negative narrative means that the onus is now on us to prove that singing is safe: so much for ‘innocent until proven guilty’. However in a world which seems unable to accept any risk at all, the UK government’s response is ultimately driven by concerns about liability.

Aside from the obvious impoverishment of the Liturgy and the wider cultural heritage, many professional musicians now face very bleak times. Amateur musicians will suffer too. However in the case of children’s choirs, and those which include children such as cathedral choirs, this situation is nothing short of catastrophic.

Children’s choirs are in a constant state of flux and development and boys’ voices undergo pronounced change which requires particular management. Throughout a choir, individuals are at different stages of sight-reading proficiency, pitching ability and general musical awareness. The younger ones apprentice from the older ones, with every child at a different stage on the journey. Through this process the transmission of the choral tradition itself takes place, encompassing the shared musical experiences, the collegiate knowledge of specific repertoire, and the choir’s unique sound itself, melded by the building in which it sings.

None of this can be simply put on hold; it has to be active in order to exist. This is certainly the case for the two choirs which I direct, the London Oratory Junior Choir and the London Oratory Schola, on whose behalf I wrote to Oliver Dowden MP, the Secretary of State for Digital, Culture, Media and Sport to express these concerns. Over a week later his department is yet to respond, however a number of other Members of Parliament including Sir Edward Leigh MP have contacted me to assure me of their support.

In my letter I wrote that, unlike adult choirs, a boys’ or children’s choir cannot simply pick up where it left off. The process of nurturing and developing cannot be put on ice and then resumed at a later date without significant consequences. It could take three to five years to recover the damage and rebuild, and a generation of singers could easily be lost. Time is of the essence, and the clock is always ticking for a boy treble.

Science is not absolute, even when preceded by the definite article. The risks to the young are absolutely minute. Will institutions such as Nine Lessons and Carols from King’s College disappear from the landscape? Will there be no choir at the next coronation in Westminster Abbey? Of course not – common sense will prevail in the end, but the sooner the better.