Bertrand Comparet: Adam was Not the First Man & Adamic Race in History Pt 1

Bertrand Comparet speaking on Adam and the Adamic white race.  Noah was perfect in his DNA and did not race mix (Genesis 6:9)

Noah’s flood was a partial flood and only the white race is descended from Noah and his family.

Bertrand Comparet: Adam was Not the First Man & Adamic Race in History Pt 2

The Two Floods on Earth

The Man (referred to only as the man in Genesis 1:28) in the first creation on earth by God of Abraham Isaac and Jacob was Abram, and the civilization that was founded was called Lemuria.  This civilization was destroyed by God of Abraham Isaac and Jacob, due to sin and contamination of the DNA much like today, through a polar flip which caused a flood covering the entire earth.  The destruction of Lemuria was in the first world wide flood.

God of Abraham Isaac and Jacob removed the saints or firstfruits prior to the polar flip from earth (Lemuria) and later established them as the Hebrews or Sumerians in Sumer in Mesopotamia.  No animals were saved during this first flood as all creatures were corrupted by the Elohim, Bene ha’elohim and the fallen Angels who were experimenting with the DNA.  There is nothing new under the sun as these same entities are continually doing it today to both man and animals just like they did in the days of Noah.

The 144,000 Saints were the remnant of the Lemurians that God of Abraham Isaac and Jacob rescued.  These Saints are immortal and are the 144,000 referred in Revelation 7 and 14 that will be included in the Harpazo from the 12 Tribes of Israel.

Noah’s flood was only a partial flood.  Noah was perfect in his generation is a mistranslation in Genesis 6:9 and means that Noah was without blemish and he kept his DNA pure and did not race mix.  Noah and his family were of the white race.  There were many races here on earth before Noah’s flood that were not impacted by Noah’s flood.  So don’t let anyone try and tell you that all the races came from Noah and his family as this is not correct.

Genesis 11:2 tells us that after the flood, Noah’s descendants journeyed from the east, until they came to the land of Shinar. Therefore, they must have come from some place east of the Tigris and Euphrates valleys. The only place where such a flood as the Bible describes could have occurred, eastward from the Tigris and Euphrates valleys, is this mountain basin in Sinkiang.  This basin, through which flows the Tarim River and which is sometimes known as the Tarim Basin in southern Sinkiang, is identified as the site of Noah’s flood.  It is also interesting to note that the Tarim mummies recently discovered are Caucasia and are famous for their European like facial features and clothing. The Tarim mummies are ‘living ‘ proof that 4,000 years ago people travelled over vast distances, interacted, interbred and spread their cultural practices.

Just as the the Fallen Angels were corrupting the DNA of man in Noah’s time, they will be corrupting the DNA of man in the end times which includes race mixing which is forbidden by God of Abraham Isaac and Jacob.  The white race is the “holy seed” and were are not  to race mix or take any vaccines, especially the Covid-19 contaminated tests and the Covid-19 vaccines that Kill Bill is offering soon,  and keep our DNA pure.

Noah’s Flood Was Not World Wide

The Flood of Noah

Was Noah genetically “perfect in his generation”?

It now seems that now most scholars agree that Noah’s flood was not worldwide but a localized flood.

With all the different views on where Noah’s flood was, I reread an old (1934) book “Tracing Our Ancestors” by Frederick Haberman. This book, among many subjects, locates the Garden of Eden, the area where the Adamites lived and the place of Noah’s flood. Also see the maps reprinted from Haberman’s book.

The bible tells us exactly where the Garden of Eden was and nails it down with the descriptions of the rivers. Phisom, Geon, Tigris and Euphrates. These rivers are still there as described in the Bible but the names have changed. Rivers with similar names were named northwest of the Persian Gulf, i.e., the Tigris and Euphrates. The Garden of Eden was on the Pamir Plateau and when Adam left the Garden of Eden, he went eastward into Tarim Pendi (basin), China. That area was surrounded by mountains and the area within was at a prefect altitude for constant weather and was full of springs from the mountains roundabout. The area now has changed in elevation and is a desert. When the flood came it filled the basin and Noah floated out and to the west. Then the entire back side of the mountain range fell down and drained into Mongolia to the East the scars of which are still there. When he walked down the mountain, the Chinese, from the book of the Shu-king, the Chinese Noah, speaks of Fu-hi who was born in a rainbow about 2355 BCE. Chinese writings go back about 3,000 to 4,000 years BCE and the flood was about 2344 BCE.

Noah and his group walked off one of those Ararats (the highest peak) and into populated areas. He migrated southwest down to the inhabited city of UR of the Chaldeans sometime after 2344 BCE. UR of the Chaldeans is the city where Abraham was born. Once a coastal city near the mouth of the then Euphrates river on the Persian Gulf, UR is now well inland.

In 1980, a Chinese expedition to find “The Lost City of Loulan” (north-eastern edge of the Lop Desert [Tarim Basin]) found the mummified remains of a 40 year old, brown haired woman with obvious Caucasian traits in an immaculate state and radiocarbon dated her remains to be approximately 3,800 years old. This is the area where the Pe-Shan range collapsed into the Mongolia. In close proximity to this so-named “Loulan Beauty”, there was another mummy in a tomb constructed of wood that carbon dated as early as 6,000 B.P. (4,050 B.C.E.).

Mair states in his book that “the earliest mummies in the Tarim Basin were exclusively Caucasoid, or Europoid” with East Asian migrants arriving in the eastern portions of the Tarim Basin around 1000 B.C.E. In trying to trace the origins of these populations, Victor Mair’s team suggested that they may have arrived in the region by way of the forbidding Pamir Mountains about 5000 years ago. This is the area of The Garden of Eden and the timing is about the time of Adam being sent out of the Garden of Eden to the east.

The Israelite Mummies of Tarim Basin uncovered In the dry hills of the central Asian province of Xingjiang, archaeologists have unearthed more than 100 corpses that could be as much as 4,000 years old — astonishingly well-preserved and Caucasian!  Noah’s flood was in the Tarim Basin.  These white caucasoid mummies were amazingly well preserved by the arid climate.  The mummies had long noses and skulls, blond or red hair, thin lips, deep-set eyes, and other unmistakably Aryan features.  One such mummy of a teenaged girl with blond hair and blue eyes, found in a cave, has become quite a tourist attraction in Beijing. She has been nicknamed “The Lady of Tarim” and she is on display to throngs of museum visitors in the Chinese capital. 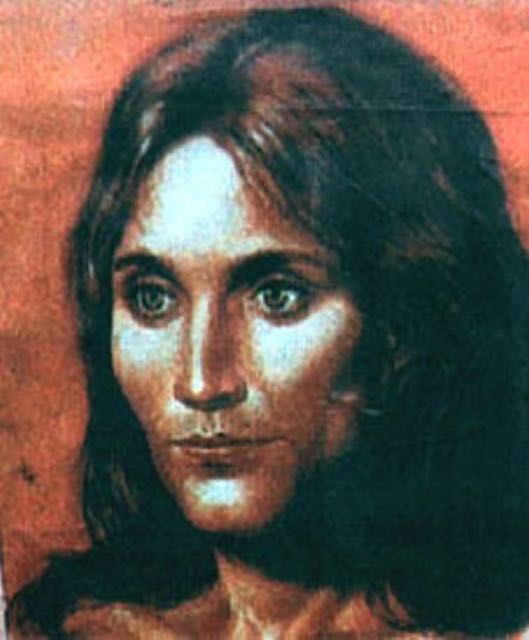 Link to my post on the White Mummies of Tarim Basin:

The White Mummies Of Tarim Basin And The Actual Location Of Noah’s Ark. Find Out About Our Ancient Ancestors From Abraham, Isaac And Jacob That Historians Have Hidden From Us. The White Caucasians Are The True Descendants Of Shem. Very Informative Videos! Pastor JW Reveals The Truth!

The Israelite Mummies of the Tarim Basin

The Harpazo will occur 3 ½ days after the two imposter prophets are assassinated. 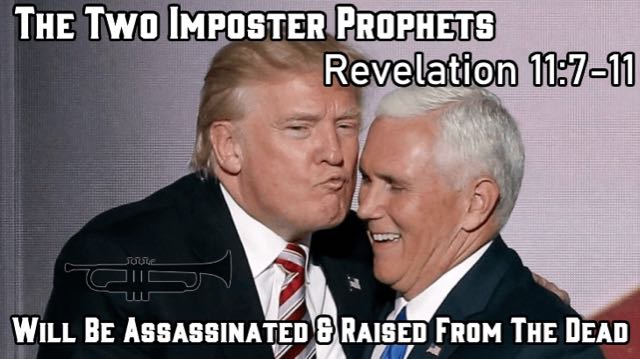 The Rapture will include the dead in Christ who will be raised first; then the 144,000 Saints created in the first creation will be Raptured (Revelation 7:4); then Israelite babies and toddlers belonging to the Elect or those created in the second creation and the disabled.  Trump and Pence will also be raised at this time which should be a televised event.  Only the Saints who have been baptized in the name of the Father, Son and the Holy Ghost will be Raptured.  The Christian Elect who have been baptized in full immersion will be hidden from the fire and the flood during the Great Tribulation.  Please see my article on the two Creation Events detailing the Saints and the Elect.

After the Rapture, men’s hearts will fail them for fear as God of Abraham Isaac and Jacob will allow the gates of Hell itself to be opened on an unthankful and unbelieving humanity (Luke 21:26).  Most Christians on the earth today are referred to as the Elect, and they will be left behind as their faith must be tested. The Christians left behind may be tested unto death by their not accepting the mark of the beast. Others may be tested in the hour of testing either in a flood or in the fire of nuclear war or both. Christians that are baptized (full immersion) and have the Holy Spirit that maintain their faith will be hidden and protected by Yahushua during this time of trial during the Great Tribulation.  Some Christians will by martyred or beheaded under the contrived Noahide Laws.  Some of the Israelite Christian Elect who have babies and toddlers may find their babies missing after the Rapture occurs. These Israelite parents will be reunited later with your babies and toddlers who will not have aged during the Greater Exodus in Egypt when you are sent to Egypt in ships (Deut. 28:68) by God of Abraham Isaac and Jacob for the regathering of the remnant of the Israelites (Isaiah 49:20-21).

See article on how to get baptized by David Pawson as he is one of the few people I found preaching the full immersion baptism at an age of accountability in the New Testament.

Baptism: How The Holy Scriptures Explain How Christians Are To Be Baptised Which Is One Of The Criteria For Being Saved. Great Videos That Explains How Baptism Should Be Performed.