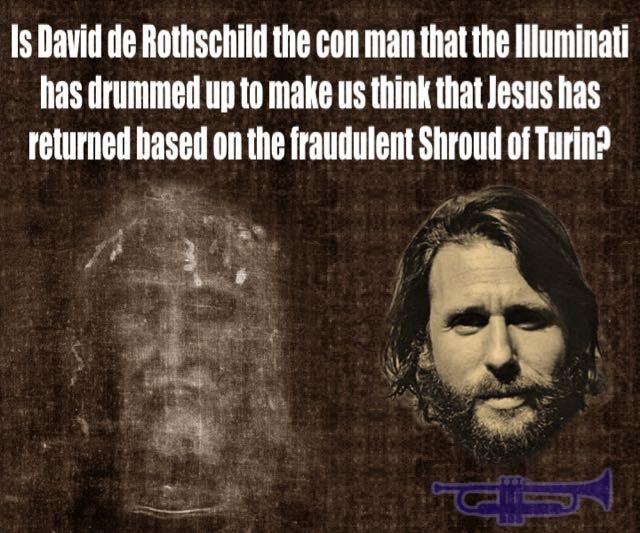 Is human cloning going on right now? Is the Shroud of Turin real or a fake? Is the antiChrist alive now? Dr. Joye Pugh explored all these questions in which you can be the judge.  It is very interesting video as Dope Francis, the False Prophet, is certainly planning a deception to make people believe that someone that looks like the Shroud of Turin is here on earth today and will be claiming to be the Christ.

I don’t agre that it will be Prince William that will be announced as a false Messiah as Isaiah 34:12  tells us that the British Royal family will all be killed. Joye’s interview if very thought provoking nonetheless.

No nobles will be left to proclaim a king, and all her princes will come to nothing.  (Isaiah 34:12 Berean Study Bible)

A picture may well be worth a thousand speculations… 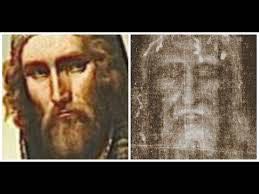 And to mollify those who made me endure them…”

Grand Master – 33rd degree, did take to the grave his masonry,

He left his mark on the Turin shroud, but was burnt alive for the Parisian crowd

Denied the Christ, trampled the cross, rode to Jerusalem on his horse.

At the stake, he renounced his lies – the smoke left hanging in the skies Jacques De Molay!

The royal blood they did chasten, for the execution of this mason Jacques De Molay!

“…The life offered me on such infamous terms, I abandon without regret…”
They buried the mighty heretics, these Templars with their magic tricks.
But fire’s freedom laughed the last, and echoes loudly from the past. 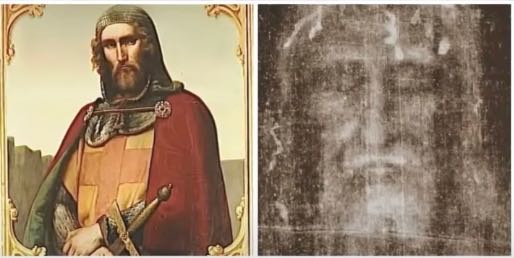 On March 18, 1314, Jacques de Molay, the 23rd and the last Grand Master of the Knights Templar, is burned at the stake in Paris, France.

Using Holy Gematria and thee ciphers found on Gematrix.org (Jewish, English, and Simple), we can confirm that the face on the Shroud of Turin is indeed Jacque Molay.

Mirror Image of the death of Jesus

Clearly it is the face of Jacque de Molay on the Shroud of Turin according to the three witnesses (Gematria numbers) of Holy Gematria (7-6-8).

The Knight’s Templar went to the Temple of Solomon and raided all the treasures and took them back to France.  They were in turn taken to Rosslyn in Scotland.

Both Jesus and Jacque de Molay suffered the fate of crucifixion.

Both Jesus and Jacque de Molay did not die on the cross.  They were not resurrected but rather they were resuscitated.  Jacque de Molay later was burned at the stake and died.

The story of the Suffering Servant in Isaiah is a prophecy of the Life of Jesus.

Isaiah 52:2 He has no stately form or majesty

Isaiah 52:5 He was pierced through

Isaiah 52:6 God of Abraham Isaac and Jacob caused the iniquity of us

All to fall on Jesus

Isaiah 52:14 His appearance marred more than anyone

His form more than sons of man

Isaiah 53:8 His generation considered him cut off

And not in the land of the living

Isaiah 53:10 Jesus will see his offspring

God of Abraham Isaac and Jacob will prolong his days

There is a question we must now ask. Why was it only Jesus who was offered Gall? The answer to this is in the prophecy of the Suffering Servant in Isaiah 53:2 namely: He has no stately form nor appearance that we should be attracted to Him. The Romans were great record keepers, especially in regards to anyone who was to be executed under Roman Law in the Roman Empire. One copy of the arrest warrant had to be sent to Rome. The only extant copy of the arrest warrant for Jesus is in the Vatican Archives today.

For He grew up before Him like a tender shoot, And like a root out of parched ground; He has no stately form or majesty That we should look upon Him, Nor appearance that we should be attracted to Him. (Isaiah 53:2)

He has no stately form or majesty

Yeshua was born a hunchback

Yeshua had scoliosis of the spine

The exhumation and reburial of Richard III of England began with the discovery of the king’s remains within the site of the former Greyfriars Friary Church in Leicester, England, in September 2012. Following extensive anthropological and genetic testing, the remains of Richard III, the last English king killed in battle, were ultimately reinterred at Leicester Cathedral on 26 March 2015.

Richard III, the final ruler of the Plantagenet dynasty, was killed on 22 August 1485 in the Battle of Bosworth Field, the last significant battle of the Wars of the Roses. His body was taken to Greyfriars Friary in Leicester, where it was buried in a crude grave in the friary church. Following the friary’s dissolution in 1538 and subsequent demolition, Richard’s tomb was lost. An erroneous account arose that Richard’s bones had been thrown into the River Soar at the nearby Bow Bridge.

Richard III, suffered from scoliosis as a child and into adulthood. Symptoms worsened as he got older. The University of Leicester examined his spine, noting a curvature, caused by scoliosis. According to List Verse, “in life, his left shoulder would’ve been much lower than the right and from the pressure scoliosis exerts on the lungs.”

Scoliosis is a medical condition in which a person’s spine has a sideways curve. The curve is usually “S”- or “C”-shaped over three dimensions. In some, the degree of curve is stable, while in others, it increases over time. Mild scoliosis does not typically cause problems, but severe cases can interfere with breathing. Typically, no pain is present.

For He grew up before Him like a tender shoot, And like a root out of parched ground; He has no stately form or majesty That we should look upon Him, Nor appearance that we should be attracted to Him. (Isaiah 53:2)

The only description of Jesus that we have available to us comes from the ‘forma’ or arrest warrant issued for Jesus by Pontius Pilate’s officials, which is held in the Vatican Archives. However Josephus, in his “Capture of Jerusalem”, drew information directly from the ‘forma’, a copy of which had to be filed in Rome.

Description of Jesus from the arrest warrant issued by Pontius Pilate.

‘…. A man of simple appearance, mature age, dark skin, small stature, three cubits high, hunchbacked with a long face, long nose, and meeting eyebrows, so that they who see him might be affrighted, with scanty hair with a parting in the middle of his head, after the manner of the nazarities, and with an undeveloped beard.’

A height of three cubits would put Jesus at under four feet six inches, which combined with a hunchback and severe facial features would make him an easy person to recognize.

The position Jesus was in was his by birth, not because there was anything extraordinary about his nature. Deemed to be heir to the throne of David, he was at the centre of an evangelising mission which attributed charisma to its leaders for the sake of winning the awe and respect of followers. Priests, Levites and kings were regularly thought of as incarnations of gods, angels and spirits in a Hellenistic world where the idea of gods coming down in the form of men was a common theme.

But it seems that Jesus interacted with his position in an extraordinary way. In each of the decisive events of the history, he was on the side of those who suffered from the system: the poor, the handicapped, and the socially excluded. His protest on their behalf was at the same time a protest for himself. Born with a stigma he did not deserve, of possible illegitimacy and inability to inherit, he fought against oppressive structures, moral and political. In doing so, he freed his own religion from its introversion, giving it to a larger society, the Greek world, which it had hated and feared. Born at a time, and in an institution, which was posed for such a change, he became the door through which the change occurred. Through his death and resurrection, he became the only door in which we can obtain salvation for our sinful nature.

In practice he would often have been a tool in the hands of others, who found themselves also the agents of historical processes. But when competing forces tore at him, he yielded to the side that stood for liberty and human quality; that choice was surely his own.

See the following two full articles by Dr. Luke Prophet (Links below) where he unravells both the pesher and use Holy Gematria to confirm the pesher code in the Gospels and Revelation and find the true history of Jesus and His disciples, the Crucifixion, the Early Chruch and how Jesus fulfilled the prophecy of the Suffering Servant of Isaiah 53.

Could Adam Green and David de Rothschild Be Cousins? The Resemblance Is Uncanny! Great Video.

What is the Sign the Prophet Jonah gave us that Signifies the Beginning of the Tribulation? What Lessons Can Be Learned from Jonah? What Ethnic Group did Jonah Belong to, and Who Are They Today? Does Nineveh Represent Sinful America Today and Will Our End Be Invasion, Captivity and Destruction? 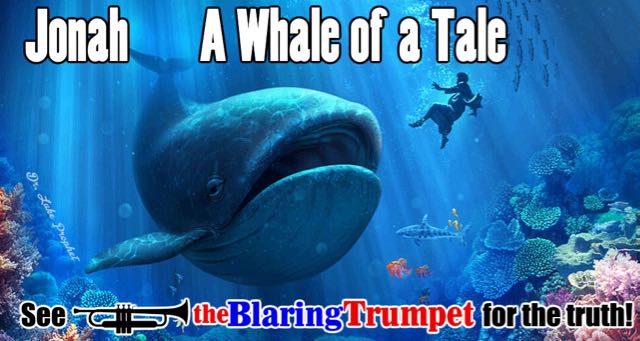 False Prophet Francis is referred to as the Beast of the Earth.  Dope Francis is an Argentinian Jew, A Fallen Watcher, and has called for the extermination of the white race.  Dope Francis worships Lucifer and plans to lead as many souls to Hell before Jesus the Messiah returns to exterminate all evil on the earth and lock up the Devil again.   Please see my previous articles on Dope Francis and Recep Erdogan (the Beast of the Sea).  Erdogan is the Assyrian and the transmigrated Ninurta and Adolf Hitler.  Erdogan is also the rider on the pale green horse and all the four horsemen have started to ride.  The Holy Spirit is holding them back until after the Harpazo. 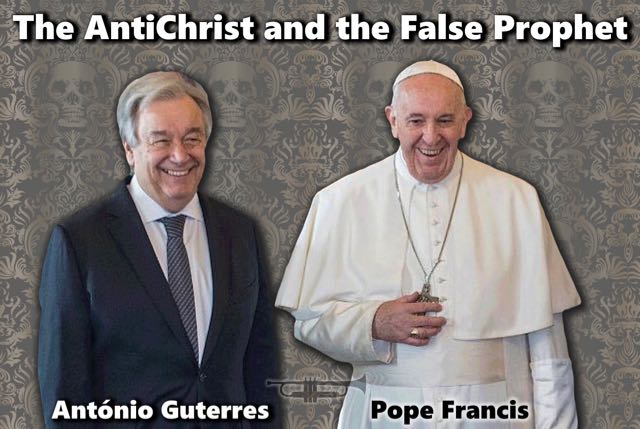 The antiChrist Has Arrived! Great Video and the Calculation of the Number of the Beast Six Hundred Three Score and Six