Thanks once again to Nicola for these photos; previous articles in this series: part 1, part 2, part 3.

The Tuscan town of San Gimignano is named for St Geminianus, a bishop of Modena in the Italian region of the Emilia-Romagna, who died in 397, the same year as St Martin, whose feast is kept today. But it also has another patron Saint, one its own citizens, a girl named Fina (short for Serafina). Although her noble family had fallen into poverty, from a very young age, she would give half of her own food to those even less fortunate than herself, until she was struck by a disease of some sort that left her almost totally paralysed. At the same time, her father died, leaving her and her mother in even more dire straights; her mother often had to leave her alone to look for work or beg. In the midst of severe suffering, Fina was never heard to complain, but prayed with her eyes always on a crucifix, “It is not my wounds but Thine, o Christ, that hurt me.” Finally, her mother died and she was left completely destitute, cared for only by two friends named Beldia and Bonaventura. Since she had heard that Pope St Gregory the Great also suffered terribly from various diseases, Fina would often pray to him that he would help her bear her sufferings. Eight days before her death, St Gregory appeared to her and told her that God would give her rest on his feast day, the day on which she died at the age of only 15, in the year 1253.

In 1468, the architects Benedetto and Giuliano da Maiano were brought to the Collegiate Church of the Assumption in San Gimignano to build a chapel dedicated to St Fina. Seven years later, Benedetto completed the altar which houses her relics, while the most successful artist in Florence at the time, Domenico Ghirlandaio (the future painting teacher of Michelangelo) was hired to fresco the walls and ceilings, which include two scenes from her life. The relics now repose underneath the altar… 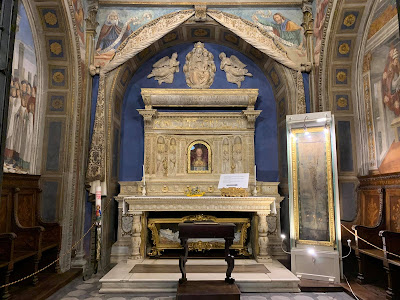 but were formerly in this urn mounted on the wall above it. The poetic Latin inscription says, “The bones of a virgin lie hidden in the tomb which you see, friend; she is glory, model and defense for her own (i.e., for her fellow-citizens). Her name was Fina, this was her native place. Do you seek miracles? Read what the walls (i.e. the paintings on them) and the living signs have to teach.” (There is a spelling error in the 3rd line of the inscription, EVIT instead of FVIT.) 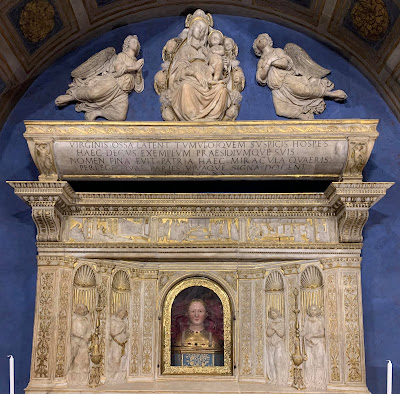 St Fina is not incorruptible (quite the contrary); her bones are now covered over with a wax effigy and a structure that supports the clothing. This new urn is designed so that her body can be carried in procession on her feast day. 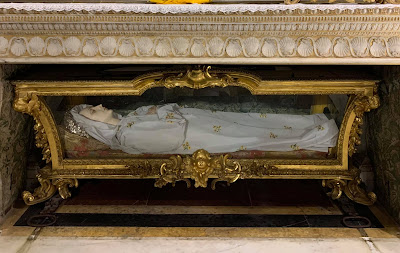 During the years of her paralysis, Fina would often have to lie for long periods on this plank, to which (there is no polite way to explain this) she eventually became at least partly attached. Within the last couple of years, it has been placed in this new modern case with a sealed nitrogen atmosphere to preserve it, and is now displayed within the chapel. 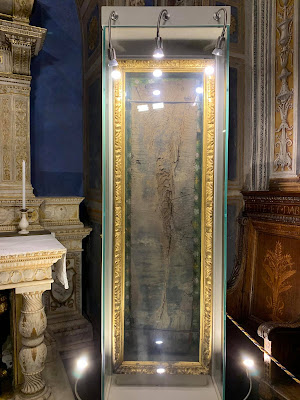 On the right wall of the chapel, Ghirlandaio painted this image of the appearance of St Gregory to St Fina shortly before her death. (Renaissance artists in general, and particularly the Florentines, do not dwell on things that are ugly and distressing, and the artist does not show us Fina’s horrifying condition at the time of her death.) 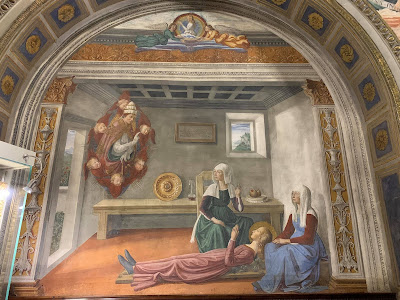 When St Fina’s body was detached from her plank, flowers immediately grew up on the wood, and the room was filled with their pleasant scent, indicating the Saint’s passage into heaven. To this day, a particular kind of small violet that grows in the area of San Gimignano is known there as “St Fina’s flower.” 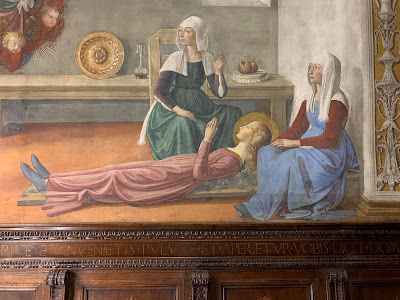 On the left wall, Ghirlandaio shows the funeral of St Fina, attended by the local bishop (of the see of Volterra, since San Gimignano itself is not an episcopal see). The funeral is attended by three miracles. At the time of the ceremony, every bell in the city rang spontaneously and simultaneously; this is represented by an angel (barely visible on the left between two of the town’s famous towers) who rings the bells of one of them. Fina herself reaches out and grabs the arm of her old nurse Beldia, which was withered, but healed at her touch, while a blind boy touches his eyes to her foot and regains his sight. 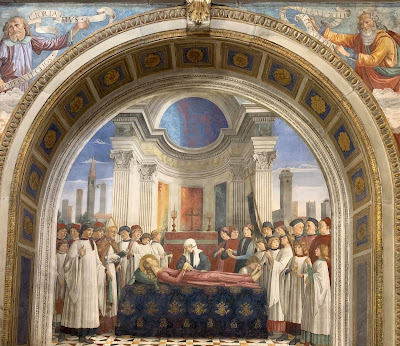 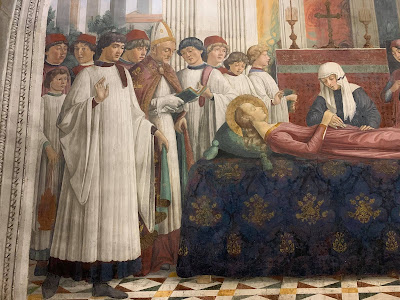 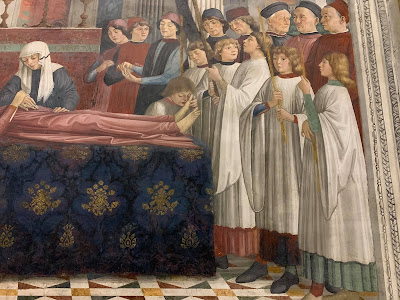 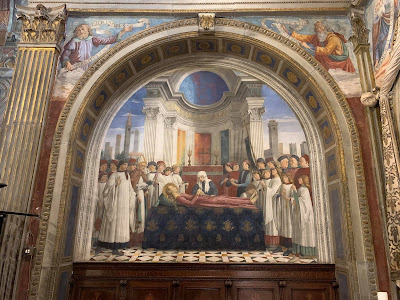 The pendentives below the architrave are filled with images of the Prophets; to the sides of the windows are the Four Doctors of the Church, together with Ss Nicholas and Augustine, and in the vault, the Four Evangelists. 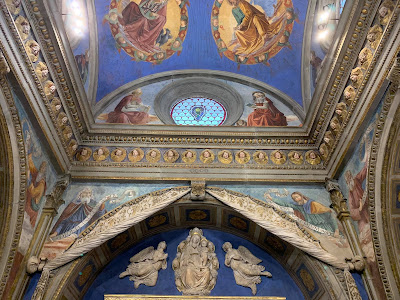 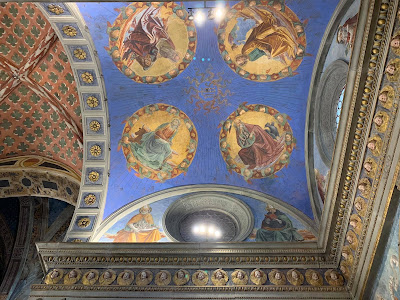 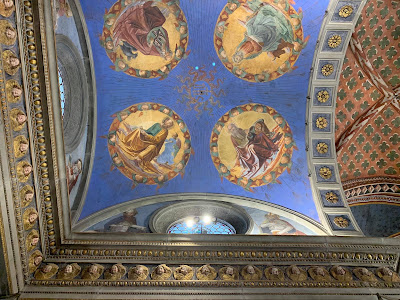