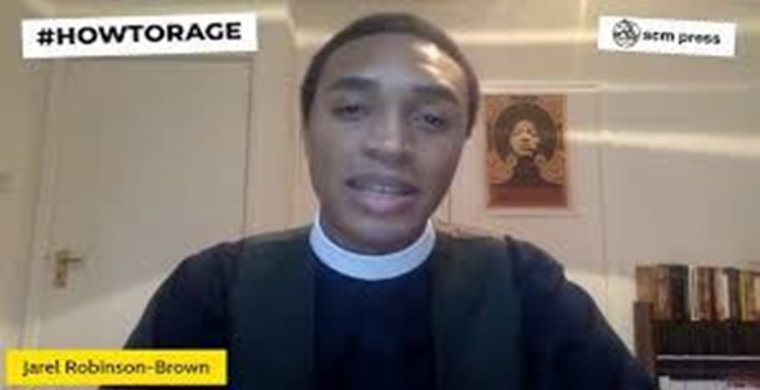 “Your statement raises questions about the freedom of thought and speech of individual clergy, and fails to fully acknowledge the deliberate and hateful way that Jarel’s tweet has been misconstrued and used to attack him in ways that are both racist and homophobic … This is a serious safeguarding issue.”

While I agree that Jarel is entitled to be safeguarded against abuse, this comment misses the point. How?

Freedom of speech — I have yet to see any evidence that our brother Jarel is being ‘silenced’. On the contrary. He clearly has an entirely legal and eager following on social media as well as within sections of the Church. Just this week he has had his ‘rage’ approach to the faith and church trumpeted by the Church Times, no less. Anyone who does wish to silence him is wrong — he is entitled to air his opinions just as much as the rest of us. The key point is, of course, that we don’t have to agree with what he says. Nobody has to agree with what any of us say. But we are entitled to say it, within the confines of the law.

Racist and homophobic abuse — again, actual abuse is totally unacceptable and needs to be called out. But it is unclear to me what the current shouters class as abuse. If ‘abuse’ means ‘any criticism’, then it is not abuse. It is simply the expression of an alternate opinion. Abuse includes the expression of an opinion that is based on criticism of someone’s ethnicity, orientation and so on. Jarel RB cannot fairly be criticised just because he is gay and BAME. This is wrong. Clearly. But his views can be criticised freely.

Neither can he and his expression of his opinions be let off any hook because he is gay and BAME. His views cannot be exempt from criticism as long as it is polite and expressed within the limits of the law. This is linked to freedom of speech itself. We can all express our opinion. And we can all expect alternate views to be expressed in response. Criticism of a viewpoint does not constitute abuse.

For example, this comment has been cited as abusive in the Church Times:

‘Many of the signatories referred to Mr Robinson-Brown’s race, with comments such as “Racism is a one way street according to some. When a white person is accused of racist tendencies they are rightly called out and vilified. When a BAME person does the same it seems to be their right to do so based on the wrongdoings from generations ago.’

To cite this as being abusive is logically flawed. This comment does not refer to Jarel’s race, it refers to the generality of race. ‘When a BAME person’…., not ‘When this BAME person’….. . Jarel just happens to be a Black guy. Fine. And he’s entitled to air his views. If someone wants to criticise my comments just because I’m a white woman, that’s wrong. To criticise Jarel’s views just because he is Black is wrong. But to criticise his views because you disagree with those views is entirely fair and legal. Sadly, we see this logical flaw raised all the time when a minority individual’s view is criticised — the critic is immediately assumed to be criticising the individual rather than his view — and branded a racist. Likewise, if a gay person is criticised, the homophobia card is immediately waved. This is wrong and ultimately self-defeating, as all it achieves is to fan the flames of actual racism and phobias.

There is now a clamour against the Diocese of London’s initial statement about the situation in which Jarel’s tweet was referred to as ‘unacceptable, insensitive, and ill-judged’. I see nothing wrong with that wording other than it being too lenient. Had a white clergy member made a statement about Black Lives Matter being a cult of Black Nationalism, then he/she would most likely have been instantly suspended and much stronger words used to describe the tweet.

Apparently these words of ‘unacceptable, insensitive, and ill-judged’ constitute abuse against Jarel RB and have ‘thrown him under a bus’. I would respectfully suggest that Jarel threw himself under the bus. As an educated, intelligent man, I may suggest that he could have known exactly what he was doing when he wrote his now (in)famous tweet. The whole exercise could be reasonably interpreted as a masterclass in book promotion. And it has worked. His book is now soaring up the Amazon charts before it is even published.

This whole mess is now the fault of everyone else. The Bishop of London, in her usual right-on manner, has stated:

‘Any form of online abuse, including racism, homophobia and threatening behaviour, cannot be tolerated. I sincerely hope that those perpetuating it will desist and consider the hurt they are causing’.

Hear, hear. But that works in both directions, Madam Bishop. Actual abuse of Jarel is out of order, illegal and wrong. But criticism of his views is fair game. If the bishops in general wish to act against online abuse, they could do worse than ensure that their efforts work both ways. As it stands, it looks to the silent majority in the Church that to be BAME and LGBTQ allows an individual to say and do things that white folks can’t say and do — and to expect to be supported in it under safeguarding rules. If only the Church were as quick to jump on the safeguarding bandwagon in all cases.

Here’s another example of the problem. The Society for the Study of Theology makes this logically flawed statement:

‘We call on fellow theologians and UK churches to join us in taking this stand. We note the apology made by the Church of England Synod to the Windrush Generation last year for the racism it has faced. Supporting Revd Jarel Robinson-Brown is essential to demonstrate the sincerity of this apology and to establish trust and confidence with Black Christian communities in London and beyond’.

This is a complete nonsense. The apology by the Church to the ‘Windrush generation’ has nothing to do with Jarel’s tweet and his current situation. It implies that no Black person can have his views criticised. The assumption that the Windrush apology is nullified by any further criticism of a Black person is ludicrous. It also assumes that the designation of Jarel’s words as ‘unacceptable, insensitive, and ill-judged’ is racist and presumably homophobic, when they describe his expression of his views. The statement by the Society for the Study of Theology is in itself racist, in that it assumes that a white-majority Church is required to apologise to Jarel in order to satisfy Black Christian communities.

In regard to the claim that some BAME folks have been put off from starting or continuing their way to ministry, I would suggest this: many traditional-minded individuals may well be put off starting or continuing their path to ministry too. Because the current direction of travel of the CofE is clearly not in line with theirs. But I am struggling to find anyone speaking up for their predicament.

Safeguarding is there for everyone. Free speech is there for everyone. And so is criticism of one’s views. The results of the forthcoming review by the Diocese of London will be an interesting read. I suspect we could all make a good stab at writing it ourselves, right now. Is it too much to hope that this is not going to further damage the Church’s relationship with minorities? And with the silent majority who now sit with their heads permanently in their hands? I suspect so.

Dr. Judi Sture is a biological anthropologist, biosecurity consultant and research ethics specialist. She is the author of the blog ‘View From The Crows Nest’ at https://viewfromthecrowsnest.net and of the book ‘Living In The Lighthouse: How To Survive Daily Life As A Christian’ (available from Amazon). She is a frequent contributor to VOL

There continues to be a range of responses in the media (official and social) to the tweet about Captain Tom that was made last week by Jarel Robinson-Brown. Predictably, the furore is now the responsibility of everyone else — indeed, anyone else — but the Reverend in question.

As usual, we are seeing a mass failure of logic in the arguments put forward in his defence. These include appeals to ‘freedom of speech’ and of course, ‘racist and homophobic abuse’. Likewise, we have seen claims that the backlash against his words is supposedly putting other BAME ordinands and would-be ordinands off entering or continuing training for the priesthood. Let’s have a look.

A letter from an Oxford chaplain (see Twitter) to the Bishop of London about her initial statement in response to Jarel’s tweet last week states: