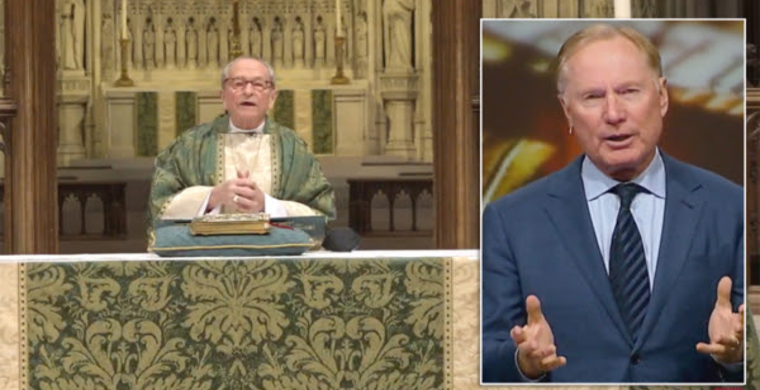 Then a tsunami wave of anger and outrage hit cyber space, with the bulk of the anger directed at Washington Bishop Mariann Budde, who suddenly back peddled faster than a crocodile looking for raw meat.

“I would like to apologize for the hurt caused in inviting Max Lucado to preach at Washington National Cathedral, and for not heeding the appeals that came to Dean Hollerith and me prior to Sunday, February 7 asking us to reconsider. I didn’t take the time to truly listen to your concerns. In a desire to welcome a wide variety of Christian voices to the Cathedral pulpit and on the assumption that Max Lucado no longer believed the painful things he said in 2004, I made you feel at risk and unwelcome in your spiritual home. I am sorry.”

She went on to say she felt the pain of those wounded by things Lucado has said and written, even though his sermon did not touch on the subject “I should have known better,” she opined.

She then went the whole enchilada saying, “More than apology, we seek to make amends. As a beginning, we invite all who wish to speak of their experiences in the church as LGBTQ+ persons and their allies to join Dean Hollerith and me for a listening session.” The aggrieved shall be heard.

Hollerith weighed in with his own mea culpa. “Later, when people pointed out those writings to me, when they tried to tell me they were hurting because of this invitation, I didn’t listen. In my straight privilege I failed to see and fully understand the pain he has caused. I failed to appreciate the depth of injury his words have had on many in the LGBTQ community. I failed to see the pain I was continuing. I was wrong and I am sorry.”

It isn’t the first time Lucado has preached in an Episcopal church. He has done so several times at St. Martin’s Episcopal Church in Houston, Texas, The Episcopal Church’s largest congregation by membership and attendance.

“I’ve known him for years now,” Levenson told ENS. “I would say he’s one of the most loving and engaging of the pastors that I’ve ever known.”

Levenson added that he thinks Lucado shares the view that everyone should be welcomed in the church, gay or straight, but Levenson and Lucado both draw the line at supporting same-sex marriage. “Frankly, it kind of baffles the mind. We’re going to be a church that moves toward full inclusion in every direction, or we’re not.” He said he lamented over “these absolutely ridiculous battles over culture wars that frankly have no place in the beating heart of the church.”

But the deed was done and the wrath of many Khans enveloped the cathedral’s dean and diocesan bishop.

“To those of us who are LGBTQ, while a lot of us are still in pain, while a lot of us have experienced some awful things in our lives” roared homosexual bishop Gene Robinson, who then screamed, “we’ve won…we know how this is going to end. This is going to end with the full inclusion of gay and lesbian, bisexual, transgender, queer people, nonbinary people, all kinds of people, in the church and into the society. We work every day to make that true, but we know how it ends.”

“I have deep love and respect for Gene. He’s one of my closest friends and colleagues and allies,” said the Rev. Susan Russell, a lesbian and longtime leader in the push for LGBTQ equality in the church, but she wasn’t mollified by Robinson’s participation in the service. “I might have made a different decision than Gene did, not that they would have invited me,” she whined.

Despite Robinson’s presence and Lucado’s avoidance of any mention of homosexuality or same-sex marriage in his pre-recorded 22-minute sermon, the damage was done.

Jim Naughton, former canon for communications for the diocese said this; “They aren’t choosing to have a lecture series. They’re putting an anti-gay preacher in their pulpit in the context of an Episcopal liturgy,”

Bishop Budde got an earful from aggrieved Episcopal homosexuals across the country and posted them, nameless but heartfelt.

They variously accused Lucado of “homophobia”, “abuse” and more. Here is a sample: “Inviting Mr. Lucado to preach at your pulpit was irresponsible. He does not share our view of Christ’s Love. He puts people in the category of “other.” He represents a tradition of white men in power who diminish women, gays, black and brown people, and anyone who resists their power. . . He represents a throughline to those who have used God’s name to demean me — because I am adopted from an unwed mother, because I am a survivor of sexual assault, because I am gay. With one action, you turned what I have valued as a safe space every Sunday since the start of the pandemic to one which — at least for one Sunday — was unsafe.”

Mr. Lucado never touched on the topic, and there is not a shred of evidence that her accusations have any truth. Evangelicals focus on sin in general and preach salvation as the answer. One would be hard-pressed to believe that his church of 5,500 doesn’t have divorced, homosexuals and people of color. Clearly, the fabled doctrine of inclusion and diversity only goes one way in TEC. Thou shalt not offend the homosexual effendi.

St. Paul, writing in 1 Corinthians says; “Do you not know that the unrighteous will not inherit the kingdom of God? Do not be deceived. Neither fornicators, nor idolaters, nor adulterers, nor [a]homosexuals, nor sodomites, nor thieves, nor covetous, nor drunkards, nor revilers, nor extortioners will inherit the kingdom of God. And such were some of you. But you were washed, but you were sanctified, but you were justified in the name of the Lord Jesus and by the Spirit of our God.”

Writing to Timothy, Paul says, “We also know that the law is made not for the righteous but for lawbreakers and rebels, the ungodly and sinful, the unholy and irreligious, for those who kill their fathers or mothers, for murderers, for the sexually immoral, for those practicing homosexuality, for slave traders and liars and perjurers–and for whatever else is contrary to sound doctrine.”

These texts say that “homosexuals” will not inherit the kingdom of God. Hence, the church cannot affirm same-sex relationships without abandoning the gospel.
The church cannot go against what Scripture forthrightly teaches without compromising its message and this it can never do.

Washington National Cathedral in Uproar over Invitation to Evangelical Pastor

The Episcopal Church’s iconic cathedral in the nation’s capital is in an uproar over an invitation to preach made to an evangelical pastor who opposes homosexuality and homosexual marriage.

Liberal Dean Randolph Hollerith invited evangelical preacher and author Max Lucado to preach a sermon. This action brought down the wrath of homosexual bishop Gene Robinson, and lesbian activist priest Susan Russell along with a bevy of pansexualists, angry and aggrieved over the decision to invite Lucado

Initially, Hollerith defended his invitation saying, “Our commitment to our LGBTQ brothers and sisters is unshakable and unchanged. We believe the Gospel calls us to nothing short of full embrace and inclusion.” Hollerith continued that he understands the concerns about Lucado’s past statements on LGBTQ issues and doesn’t agree with those views, but “repairing the breach” starts with listening to people who disagree.”