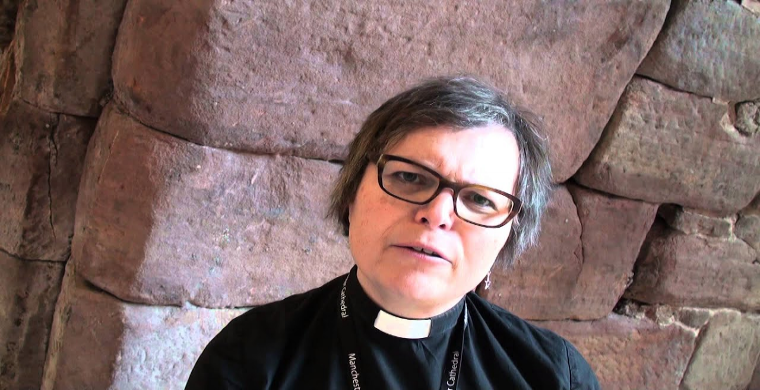 Mann was brought up an Evangelical-Charismatic Christian, according to Wiki, but abandoned her evangelicalism for a broader understanding of Church teaching that supports her new-found gender non-conformity.

It should be noted that this is the official Church of England online Sunday service, watched by many who can’t get to church, and is one of the main ‘shop windows’ of the Church.

Mann’s gender change and selection as national leader of God’s people in worship would not shock The American Episcopal Church. Such diversity signaling as one now sees has come to be expected from the Church of England. However, it would shock Global South Anglicans who have repeatedly said that any form of sexual expression outside that of a man or woman in marriage is forbidden, and that “redefinition of what it means to be human” is a sign of godless secularism rather than the will of God.

Recently the Anglican Archbishop of Nigeria, the Most Rev. Henry Ndukuba, blasted new-found fancy theologies and teachings which, he said, elevated human cultures and feelings and experimentation.

The retired Bishop of Lagos and former Archbishop of Province 1 of the Church of Nigeria, The Most Rev. Ephraim Ademowo, recently blasted Western gender-bending practices.

The archbishop recalled that when he was visiting the diocese of Michigan in 1990, that he met a greeter who dressed like a she, but whose voice was definitely a he! “I was told he went to change his gender to a she. I was taken aback. It is madness. We have taken our own stand and there is no going back. I used to say it in the House of Bishops before I retired, that if we change our posture on the gay issue our members will stone us. It is not negotiable. It is not debatable.”

The Church of England has found a way to bless such gender transition, and is rapidly moving in the direction of blessing same sex relationships, the inevitable consequence of the Living and Love and Faith process. There is no longer any debate, only controlled discussion where different views are respected in the name of diversity.

What seems strange is the silence from orthodox bishops and clergy who remain in the Church of England. Why are they silent in the face of this heresy? Could it be that the furor around a prominent evangelical in the person of Jonathan Fletcher, resulting in public critiques of evangelical leadership and theology, has made most C of E evangelicals very nervous about putting their heads above the parapet?

By any reckoning, the Church of England is no different from the Episcopal Church with its own version of Communion Partner bishops. One observer told VOL that “it will be much worse in England though, as our ‘orthodox but supine’ group in the Church of England will be much bigger than CP, and those who leave to join other orthodox Anglican jurisdictions such as the newly formed ANiE will be tiny compared to ACNA.”

Mann’s sermon reflects her own pathway to acceptance; “Jesus’ love for us reveals a different picture: it is not that we — his sheep — are stupid or unthinking, but that we are this beautifully connected up and mutually dependent community that are worthy of being saved. You see, that’s the thing about sheep. Their strength lies in being together. They are not apex predators. Jesus sees that we, as humans, are at our best when we act as a community rather than acting like predators who attack the vulnerable.”

Is she saying that predators are orthodox folk in the church who attack the liberal (LGBT) folk and therefore need to be protected from them as the church emerges into the glorious light of full-on pansexual acceptance? Nowhere does she suggest that the shepherd lays down his life for the sheep in order that the sheep might be saved through the atoning work of the shepherd on the cross for our redemption. If so, that would call into question her own gender change and advocacy for blessing of same sex relationships that has no sanction in Scripture.

You can view it all here: https://www.churchofengland.org/media-and-news/join-us-church-online/weekly-online-services/meeting-good-shepherd-where-we-are

The Church of England’s pastoral guidance for clergy on transgenderism revealed this; “The Church of England welcomes and encourages the unconditional affirmation of trans people, equally with all people, within the body of Christ, and rejoices in the diversity of that body into which all Christians have been baptized by one Spirit.” The document – approved by the House of Bishops – follows a motion overwhelmingly adopted at General Synod in 2017 recognizing the need for transgender people to be welcomed and affirmed in churches.”