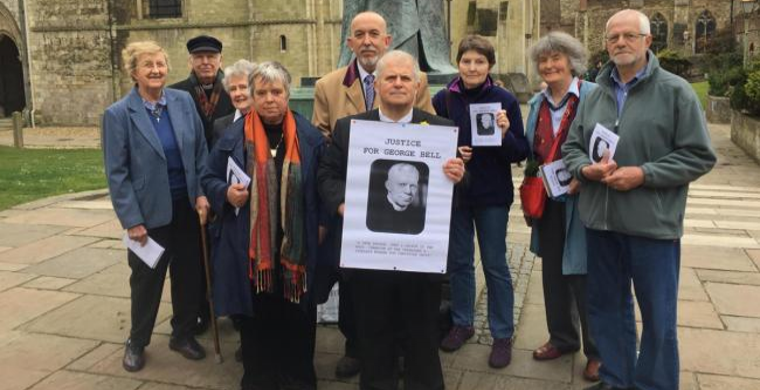 They handed out pamphlets headed “Justice for George Bell” which hundreds of Sunday morning churchgoers accepted as they left the service.

Some rejected the pamphlets and openly disagreed with the vigil.

The group is calling for a re-examination of the evidence which led to the church apologising last October to the woman who wrote to the Archbishop in 2013 to say she had been abused.

Richard Symonds, who organised the vigil, said: “What we’ve done is raise people’s awareness of the issue and I think it’s an important issue for people to look at.

“In one sense it will be a complete waste of time for me if the Archbishop and the bishop don’t have a change of heart.

“I know that’s a big thing to ask. But all we’re saying is for them to reopen the investigation and re-examine the evidence and also to rename 4 Canon Lane back to George Bell House.”

On Sunday March 20 a group of peers, academics and senior churchmen published a 5,000-word report which accused the Church of mishandling the investigation which led to the apology and payout.

The George Bell Group’s review argued that neither the testimony of Bell’s then-chaplain, nor his biographer, had been sought and his journals and travel documents has not been examined by the panel which examined the allegation.

Their announcement last October damaged the reputation of the former bishop who had been regarded as one of the greatest churchmen of the 20th century.

It has led to a number of local institutions and schools which were named after him to change their names.

Bell’s biographer Andrew Chandler was the only member of the 12 named core members of the George Bell Group to attend the half-hour vigil at the statue of St Richard of Chichester.

He said: “I think the principle of natural justice is important and what has happened so far has been very secretive.

“The difficulty with that of course is that the public has been asked to believe something without being given the reasons and the grounds which it would ordinarily expect.”

The Archbishop of Canterbury rightly says that Church of England’s response to allegations of child sex abuse has often been appalling ["Independent watchdog to police abusive priests", Mar 30].

But in its haste to make amends, the church inflicted an appalling injustice on one of its greatest bishops, George Bell.

The processes by which it decided in 2015, nearly 60 years after his death, that he had abused a girl, were shown by Lord Carlile QC in 2017 to have been flawed. He said that for Bell’s reputation to be so “catastrophically affected” was “just wrong” and that Bell “should be declared by the church to be innocent”.

SIR — Justin Welby, the Archbishop of Canterbury, states: “We can’t erase the past…We have to learn from it” [report, March 31].

He ought to have learnt from the recent past that when an error is made, correction and apology must follow.

The process by which the Church decided in 2015, with his approval, that Bishop George Bell had abused a young girl in the 1940s, were shown to be fatally flawed by Lord Carlile QC in his independent report of 2017, which said: “For Bishop Bell’s reputation to be catastrophically affected in the way that occurred was just wrong.”

He added that Bishop Bell “should be declared by the Church to be innocent of the allegations made against him”.

If the Archbishop wishes to learn from the past, how can he stand by his unfounded statement that Bishop bell remains under a “significant cloud”?

What will posterity say about an Archbishop who lacked the basic Christian precept of repentance?

His moral failure will cast a significant cloud over his reputation forever.

PROTESTERS handed out leaflets to churchgoers yesterday calling for the re-examination of evidence regarding the former Bishop of Chichester George Bell.

The Church last year apologised and paid £15,000 to a woman who was sexually molested by Bell in the 1940s when she was just five years old.

But the group that gathered yesterday outside Chichester Cathedral called for the Archbishop of Canterbury to change his mind over the matter.