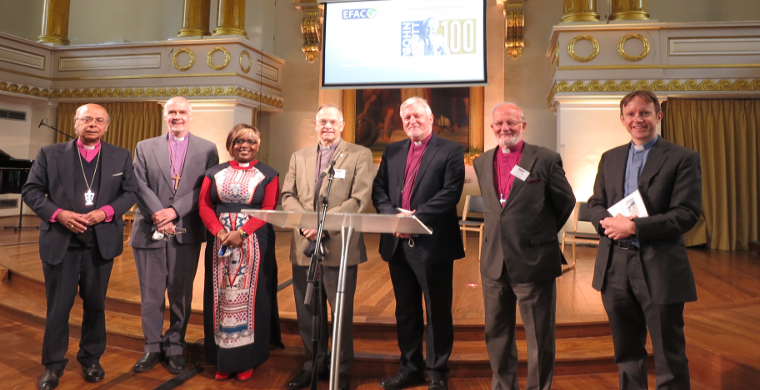 A socially distanced and masked congregation of about 40 included those associated with these and other ministries JRWS had initiated.

Julia Cameron, director of publishing for EFAC, recalled that though JRWS confessed not to know the number, he had written 50 books, all in long hand which had been translated into 60 languages and had sold in the millions.

Readers of those books included a 14-year-old boy in Mexico who wrote to the publishers of Basic Christianity and received a reply from JRWS’ secretary that the author was coming to Mexico. His daughter Eidi-Cruz-Valdivieso recalled on video that her father took a nine-hour overnight journey to hear JRWS speak and then had no way to get home. As he sat on the side of the road, a passing car stopped and its window wound down. JRWS, being driven to stay with local missionaries, invited him into the car and to stay the night. Next morning, he found his shoes next to his bed, cleaned and shined by the hands of JRWS. He went on with his wife to found a ministry among the poorest of the poor.

Chris Wright, Ministry Director of Langham Partnership International, originating in the Langham Scholarship Programme started by JRWS in the seventies, noted that JRWS was a blessing to so many because he was open to be blessed by them. He noted that in 1945 when JRWS began as curate at All Souls, England was reeling from World War Two and evangelicals were a small minority in the Church of England. Now 600 million people around the world call themselves evangelical, most from the Global South. Ruth Padilla de Borst on video from Costa Rica noted how the identity categories people used served to divide humanity into opposing groups and that JRWS exhibited humble and respectful unlikely friendship for people far outside his circle through crossing borders. She recalled his support for her father, Rene Padilla who with Samuel Escobar burst on the 1974 Lausanne Congress to speak of the integration of social responsibility into Christian mission and to separate the perception of evangelical witness from North American culture. JRWS signed the Radical Discipleship statement at that congress with 500 others.

JRWS’s triple H (half-hour horizontal – after lunch) and his double listening to the word and to the world were recalled. Three of today’s hot issues were highlighted in the service. Chris Wright noted that there is little point in contending for doctrinal purity if ethical impurity is present in the church fellowship, including where evangelical leaders had failed. Peter Harris of Arocha recalled that JRWS had read Rachel Carson’s book Silent Spring (1962) and reread Scripture in light of it, noting that Christian witness is to be to the creator in Psalms 104 and 105 as well as to the redeemer. And Ajit Fernando from Sri Lanka expounded JRWS insistence on the importance of the truth of the scripture to engage with the current cultural views that any submission to truth from God is an assault on their person and a violation of their right to express their authentic alternative lifestyle – of sin. Carelessness about truth, whether in the fake news of social media, or the unfulfilled prophecies of those claiming a prophetic ministry from the Holy Spirit, would lead to a dark age of truthless Christianity. “Christians who are careless about truth are as dangerous as the worst sceptics of our time”, he said.

Archbishop Foley Beach called John Stott the mentor he never knew he had, through his books, and commended the publication of Through the Year with John Stott, being offered as a free e-book in the Global South for every hardback purchased in the West. (See efacglobal.com for further details). Archbishop Beach held up his own mutilated copy from which he excised sections to take on his travels to save luggage weight.

While singing in church is forbidden by the UK Government, the occasion was enlivened by Youtube Videos of Prom Praise hymns sung at full blast in the Royal Albert Hall led by Noel Tredinnick, the director of Music at All Souls from 1972 – again during the rectorship of JRWS.

The recording of the event will be available on efacglobal.com

https://vimeo.com/538803984?fbclid=IwAR0lkXRsrCXU-T7awVuBpBDZe4hWIOR3A0jxJPhCubcnXAuw6C4CisPpn0s – THE LIFE AND LEGACY OF JOHN STOTT VIEWED HERE

Tuesday April 27 would have been the 100th birthday of John Stott. To mark the occasion over 600 people checked in to a livestream direct from the church where he was rector from 1950 to 1975, and had continued as honorary curate to his death in 2011, All Souls Langham Place.

A venue commemorating All Souls was fitting as this was a celebration of one of the communion’s saints whose ministry has a lasting legacy today. In The Times of Saturday April 24 Paul Woolley, director of the London Institute of Contemporary Christianity, founded by JRWS in 1983, noted that he was “widely acknowledged as one of the most influential Church of England figures of the 20th century. In 2005 TIME magazine ranked him among the 100 most influential people in the world.”

This was the first live service held in All Souls since March 2020, the first day of the tenure of Bishop Keith Sinclair as national director of the Church of England Evangelical Council, established by JRWS, and chair of the Trustees of the Evangelical Fellowship in the Anglican Communion, also established by JRWS in 1962. It was also the eve of the institution of the new rector of All Souls, the Rev Charlie Skrine, born in the year JRWS resigned as rector.