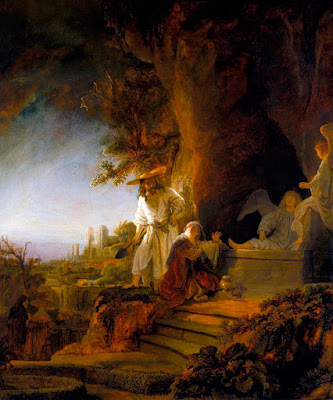 Christ Appearing as a Gardener to Mary Magdalene, by Rembrandt (1638)
Lost in Translation #46

Today we take a detour from the Roman orations to bid a sweet farewell to one of the few surviving sequences in the 1962 and 1970 Roman Missals. Victimae Paschali Laudes has been recited or sung every day in Mass since Easter Sunday, but after tomorrow, we will have to wait another year to hear it in the liturgy.

This glorious composition of the eleventh century has been attributed to Notker Balbulus, King Robert II of France, and Adam of St Victor, but its most likely author is Wipo of Burgundy, a chaplain to the Holy Roman Emperor Conrad II. The sequence appeared in various medieval Missals, where it was assigned to different days within the Octave of Easter. The 1570 Roman Missal requires its use from Easter Sunday through Easter Saturday.

I include a literal translation alongside the text, followed by my commentary.
The first two stanzas abound in paradox, which is fitting for a season that celebrates Christ destroying our death by dying, and restoring our life by rising. (See the Preface for Easter). The first sentence is even stronger in the Latin: immolare also means to slay or to shed blood ritually. The verb connotes the Hebrew Passover’s bloody sacrifice of a lamb, and ties into the depiction of Christ as the Paschal (i.e., Passover) Victim and Lamb, which is the dominant theme of the Easter Sunday Mass; the statement “Pascha nostrum immolatus est Christus – Christ our Pasch is sacrificed” appears in the Epistle, Alleluia, Preface, and Communion Verse. As the verse for the Alleluia, it creates a fitting transition to the Sequence: while the Alleluia proclaims that Christ our Pasch is sacrificed, the Sequence “answers” that Christians should [therefore] offer sacrifice to the Paschal Victim.
The second stanza summarizes a fortnight of violent imagery in the liturgy. Ever since Passion Sunday, the traditional Roman Rite has included readings and other propers recounting or alluding to the increasing hatred against Jesus Christ and the rising conflict between Him and His enemies. Yes, the Passion of the Christ is like that of a lamb who opened not his mouth as he was led to the slaughter, but Our Lord’s pacifism is also paradoxically portrayed as a fight freely waged on our behalf. St Luke (22, 43) calls the beginning of this fight in the Garden of Gethsemane an “agony” (ἀγωνία), which in ancient Greek referred to a contest in the Games. And like many of the Greeks’ violent sports, this contest in which Jesus was engaged drew blood long before the first soldier came to strike him (Luke 22, 44). It is thanks to Luke’s usage that “agony” eventually came to have the predominant meaning of “intense mental suffering” that it has today.
I translate duellum as “battle”, even though it can also mean “duel”, because the verse after it describes Jesus as a dux, which commonly refers to a military commander or head general. And I suspect that the author chose the militaristic dux rather than rex (king) because even though Jesus “reigns”, and is therefore a king, not all kings fight their own battles as ours does.
The third stanza has the narrator, or rather the chorus of narrators, turn to Saint Mary Magdalene and ask her a question. Although her response is sung by the same choir (as opposed to a single female vocalist), I must confess that the exchange reminds me of the campy dialogic songs of the big band era, in which the female singer and the band members hold a musical conversation (think Ella Fitzgerald’s “A Tisket, A Tasket” or Jo Stafford’s “Whatcha Know Joe?”).
The similarity is trivial and incidental, but it does recall how this humble sequence played a key role in rehabilitating the fine arts. The early Church had closed the theaters of Greece and Rome because they had grown too lewd, but the medieval Church brought them back through her liturgy. In the tenth century, a primitive liturgical drama emerged when tropes from the Introit of the Easter Sunday Mass began to be enacted by the clergy. The first medieval play consisted of only four lines comprising the conversation between the holy women and the angels at the tomb and was held after the Office of Matins in the sanctuary. Soon after other parts of the Easter liturgy, including Victimae Paschali Laudes, began to inspire similar theatrical productions. From there the idea expanded to Passion plays, miracle plays, and mystery plays.
Mary Magdalene’s response is a combination of details from both Mark’s and John’s accounts of the Resurrection. In Saint Mark’s Gospel, Mary Magdalene enters Christ’s empty tomb “very early in the morning”, and sees an Angel who instructs her and the other women to tell the disciples that Jesus will go before them into Galilee. Mary and the other women, however, are afraid and say nothing to anyone. Later in the morning, after Jesus appears to Mary Magdalene (is this when she sees “the glory of His rising”?), she gains the courage to tell the Apostles what she heard from the angel.
In John’s Gospel, Mary does not initially see the glory of the Rising One (another translation of gloria resurgentis); instead she mistakes Jesus for the gardener. Nor does she enter into the tomb but waits outside while Peter and John go in; it is they who see Christ’s burial linens (John 20, 11). She also sees two angelic witnesses outside the tomb, not one within.
The sequence ends nicely with an affirmation of Christ’s resurrection, which we know to be true based in large part on the testimony of St Mary Magdalene. (The use of the Latin scire is quite strong, since the verb can refer to the highest grade of human knowing.) The reference to Christ as Victor brings us full circle to the beginning, where He was described as a Victim. As Saint Augustine notes, Jesus Christ was “both Victor and Victim, and Victor because Victim,” and He was “both Priest and Sacrifice, and Priest because Sacrifice.” (Confessions, 10, 43, 69)

One stanza of the sequence, however, you won’t hear sung in Mass is the following:

This line was part of the original composition, and appeared after “Praecédet suos in Galilaeam,” but was removed in St Pius V’s 1570 edition of the Roman Missal. I am curious to know why, and I invite your own speculations in the combox below. The obvious answer is that it is pejorative towards the Jewish people, and yet the 1570 Missal retains another element that Jews find offensive, the Good Friday prayer that deems them “faithless”, with a Latin word that sounds like “perfidious.” I am not sure that sensitivity to other religions was high on the priority list at the time.
The stanza can also be criticized for inaccuracy. In Matthew’s Gospel, the chief priests bribe the Roman guards stationed at the tomb of Jesus to say that His disciples stole His body in the night, and the Jews believed them (Matt 28, 11-15). With the exception of the chief priests, then, the Jews are not deceitful but deceived.
The stanza can also give the impression that the Jews tried to silence or discredit Mary Magdalene’s testimony (like the two lecherous elders in Daniel 13, the story of Susanna), but there is no evidence for this in Scripture. While it is true that women were forbidden in Jewish society from testifying in court, the strongest attacks on the Magdalene’s credibility came from pagan philosophers like Celsus, who denounced her as an “hysterical woman.” (As quoted by Origen in his Contra Celsum 2, 59-60. Celsus puts these words in the mouth of a Jew, but this is a literary conceit.)
Perhaps the real reason for the deletion of this stanza is that it strikes a sour note which detracts from the joy of the sequence and of the occasion for which it is meant. Singling out death and rejoicing over its defeat leaves a good taste in one’s mouth, but mulling over a mob of liars who might still be out there badmouthing our dear sincere Saint does not. Resentment (not to mention fuel for scapegoating) does not belong in a celebration of the risen Savior who forgave His murderers. Whatever the reason, it is good that this stanza was left on the cutting room floor.