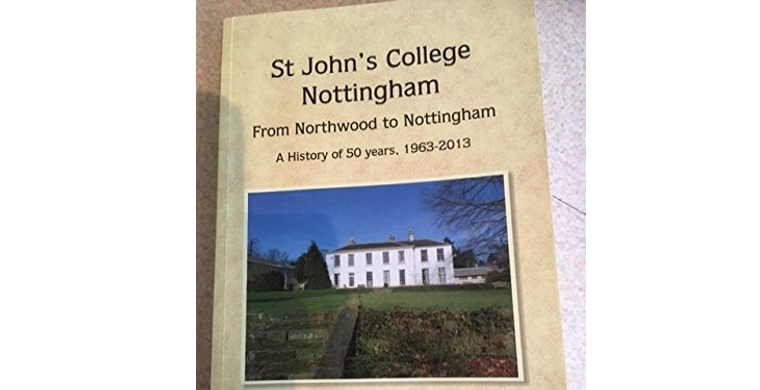 Bishop Buchanan documents the process by which the London College of Divinity decided to move to be near the Nottingham University campus on land bought for a graduate college by the Church of England. The decision was prompted by the Church’s requirement that graduate theological education be closely linked with a university. He also carefully records the changes of staff and development of courses over the next 50 years.

His study gives substantial evidence for a claim that the processes of theological entrepreneurism that characterized the life of St Johns made a major, if not the major contribution to the role, visibility and acceptance of evangelicals, their pattern of training for ministry and how ordained ministry has been exercised in the Church of England from 1970 to date.

The rise of St Johns was at a time when Wycliffe Hall and Ridley Hall were in the doldrums and Tyndale Hall and Clifton College in Bristol had imploded. Though its move was in response to central decisions of the CofE, the college leadership was not content to wait on directives from the centre. Indeed the staff often disputed Church of England recommendations and reports. It was the entrepreneurial spirit of the college’s leaders that gave it its unique flavour. The move itself was a ‘leap of faith’ in securing enough funds to provide for married accommodation on site (itself a new development). A director of pastoral studies was an innovation for any theological college, and those who completed a two year theological degree would complete their course with a Diploma in Pastoral Studies. The college embraced the emerging charismatic movement to identify itself as a charismatic evangelical Anglican college. It pioneered Extension Studies, at one time having 2000 such students on its roll.

The work of the college had significant impact on local churches in the Nottingham/Derby complex. Staff and graduates made major contributions to theological writing, liturgical developments, publishing, as members of General Synod and its committees and in time as members of the House of Bishops.

In some ways the college appears to have been the victim of its own success. Its innovative work on part-time courses and extension studies was taken up by others who then naturally became competitors for candidates. Would St Melitus have come into existence without the pioneering work of St John’s for securing formal acceptance of such training?

At the same time the college was also subject to the vagaries of central decisions made by the Church of England. For instance, at no time was the full cost of training an ordinand in residence ever met by the Church of England. So residential training itself operated at a loss. Also a number of schemes were floated from the centre for various Regional Partnerships and collaborations.

Bishop Buchanan records all these developments with carefully chosen and often very diplomatic language to cover events and discussions which were clearly quite difficult at the time.

What he does not need to gloss over was the wonderful sense of community that was engendered in college life and which sets its stamp on the expectations of those who trained there of what Christian parish and community life could and should be like. An essential part of this was the well-developed sense of humour in the college, emanating from the staff who never took themselves too seriously. In addition to a sprinkling throughout the text, four pages are dedicated to jokes and japes.

It is that sense of community which is lost when ordinands and lay ministers are not trained in residence. The inability of the Church of England to fund residential training properly led to the demise of the college and will lead to the subsequent loss of the vision of community that St John’s graduates took into the wider church.

The final closure of St John’s Nottingham in November 2021 is occasion for revisiting the history of the college from the centenary of its founding in 1963 to its 150th anniversary in 2013. Bishop Colin Buchanan was commissioned to write the history over the six years from 2007.

His meticulous study, richly indexed, derived from both college documents and interviews with two hundred alumni and others, gives an unrivalled history of the growth of the role of evangelicals in the Church of England over those 50 years. It should be a set book for any course on recent church history in England.