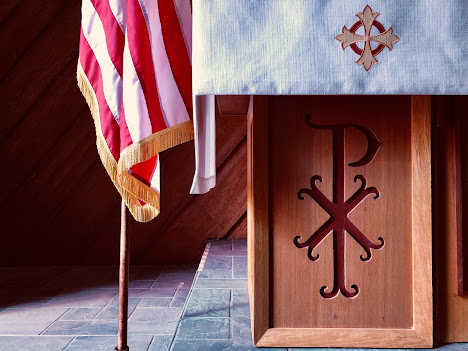 The fourth of July is, in most parts of the world, a day like any other. In the pre-55 Roman calendar, it would have been a day within the octave of the Holy Apostles Peter and Paul, with the Mass “Mihi autem.” On current Ordos it usually says “feria.” In the United States of America, of course, it is a national holiday called Independence Day, for which, in the Novus Ordo, a perfectly ridiculous “proper Mass” has been cobbled together that reeks of Masonic “Manifest Destiny” patriotism (see here for the texts and my detailed critique).

At this time of its history, the USA is — or at least is in continual danger of — devolving into violence and anarchy. Some would blame this on very recent social movements and educational failure; others would see it as rooted in longstanding philosophical errors and habits of life that take time to work out their consequences. As a student of political history I find fascinating the genre of dreamy praise directed to the US government and its founding documents as practically the best the world has ever seen, and this, not on the lips of secularists or Protestants, from whom one might expect the message, but on the lips of important Catholic figures. Let’s begin with Cardinal Gibbons, who stated in a speech at the Catholic University of America on January 19, 1897:

The same prelate returned to this theme twelve years later in the North American Review of March 1909: “American Catholics rejoice in our separation of Church and state, and I can conceive no combination of circumstances likely to arise which would make a union desirable for either Church or state.”

It seems to me exceedingly unlikely that the Leo XIII whose gigantic and impressive statue sits in the grand McMahon Hall of CUA would be able to approve of these sentiments. Indeed, he expressly taught the contrary in his encyclical Longinqua Oceani and in his letter Testem Benevolentiae directed, meaningfully, to Gibbon, not to mention a host of social encyclicals like Immortale Dei and Libertas Praestantissimum. (For an anthology of such texts, see A Reader in Catholic Social Teaching: From Syllabus Errorum to Deus Caritas Est.)


Another Americanist of distinction was Isaac Hecker (1819–1888), founder of the Paulist Fathers, who is quoted in Walter Elliott’s Life of Father Hecker as saying:


The form of government of the United States is preferable to Catholics above other forms. It is more favorable than others to the practice of those virtues which are the necessary conditions of the development of the religious life of man. This government leaves men a larger margin of liberty of action, and hence for cooperation with the guidance of the Holy Spirit, than any other government under the sun. With these popular institutions men enjoy greater liberty in working out their true destiny. The Catholic Church will therefore flourish all the more in this republican country in proportion as her representatives keep, in their civil life, to the lines of their republicanism. (p. 293)

And yet, even one so wedded to Vatican-II-style religious liberty and the separation of Church and State as John Courtney Murray had the perspicacity to see, and the honest to state, the real situation “on the ground” (this, in a lecture at Loyola University in Baltimore in 1940):


American culture, as it exists, is actually the quintessence of all that is decadent in the culture of the Western Christian world. It would seem to be erected on the triple denial that has corrupted Christian culture at its roots, the denial of metaphysical reality, the primacy of the spiritual over the material, of the social over the individual . . . . Its most striking characteristic is its profound materialism . . . . It has given citizens everything to live for and nothing to die for. And its achievement may be summed up thus: It has gained a continent and lost its own soul.

Such a blistering assessment brings to mind G. K. Chesterton’s quip in the New York Times of February 1, 1931: “There is nothing the matter with Americans except their ideals. The real American is all right; it is the ideal American who is all wrong.”

A last passage worth sharing on this fourth of July is written by a man of dual origin, French and English, namely, the historian Henry Sire, whose wide-ranging book Phoenix from the Ashes does not neglect to make some critical remarks about the role America played in the dechristianization of the world and the decatholicizing of the Church:


Across the Atlantic, there was a new Protestant power, adding its strength to those of Europe, and here, too, the work of sapping Catholic societies was prominent. It had already been seen in the French Revolution, in which the American example was influential, and the process continued in the nineteenth century. The United States, like Britain, supported the revolt of Spanish America, and in 1867 they were directly responsible for the victory of an anti-clerical regime in Mexico.
A less commonly noticed achievement was that of decatholicising the lands — the seaboards of the Gulf of Mexico and the Pacific — which the United States acquired by purchase or conquest between 1803 and 1848. For a contrast, we may look to the case of Quebec after its annexation by Britain; a policy of respecting the native institutions allowed Quebec to survive essentially as a traditional Catholic society. A different fate was that of the Spanish and French colonies that fell to republican expansion, as their institutions were overruled in favour of the self-evident truths of Thomas Jefferson. Yet it would be petty to find fault with the American Republic merely for what it did to Catholic societies. It also followed the career of territorial expansion led by its Protestant precursors, Holland and Britain. The empire that those powers built up in far-off lands was available to the Americans on their doorstep.
It is not generally remarked that the United States is the only country in the modern world which in the recent past — specifically the years from 1811 to 1898 — has acquired its national territory by dispossessing the existing inhabitants and by launching wars of aggression against its neighbours; but that record has not hampered the United States from presenting itself as the world’s moral pastor in international affairs, so successfully has democracy been identified with virtue and innocence.
Internally, the years after the Civil War became known for their corruption and political manipulation, and for the rise of the robber barons of large-scale capitalism, showing that the country’s domestic morality matched that in foreign relations. By that period, the United States was taking the place of Britain as the example of modernity. American society became the leader in advances against the older Christian ethos, a trend that became stronger in the twentieth century. The undermining of sexual morality included, amongst other signs, a growing fashion for divorce, encouraged by the strength of the feminist movement. A Protestant tradition that busied itself in imposing teetotalism and biblical literalism was engaged in looking the wrong way while these vices stole upon it. (pp. 133–34)

After that sobering passage, it does not seem quite right to say among ourselves in the USA, “Happy Independence Day!,” much less (in keeping with the faux new rite optional memorial) “Blessed Independence Day!” Rather, we might say, as indeed all Catholic citizens of any Western country at this time must say: Miserere nostri, Domine, quia peccavimus tibi.