The term “inculturation” is certainly one of the favorite buzzwords of progressives. We have heard it mentioned for decades. It was the original rationale for updating or modernizing the liturgy: the old liturgical rites (so it was said) are excessively beholden to and redolent of past ages, and modern people clearly need a recognizably modern set of rites, sleek, direct, patent, simple, comprehensible, action-oriented, etc. The fact that they did not ask for such rites is only a sign of their habitual modesty and passivity, but the scholars were capable of divining hidden intentions that a grateful laity subsequently recognized and welcomed as if these had proceeded forth from their own breasts. It was also claimed, although the impression of hocus-pocus was a little too strong to ignore, that remarkably these modern qualities were the very same as those that early Christians prized in their rites, about which we have almost no records but of which German scholarly reconstructions could achieve the highest verisimitude.

For a time, such futuristic fantasies took a back seat as the Church under Benedict XVI hunkered down to restore a modicum of dignity to the new rites and began to restore the old ones, at first only here and there, and over time nearly everywhere. The pulsing drumbeat of inculturation died down for a time, and one might have thought it had gone extinct. But, like a rare species of poisonous frog sighted in the remotest part of a rainforest, it has returned with a vengeance in the form of soon-to-be Cardinal Arthur Roche, a most unlikely proponent of flexibility and exoticism.

In an interview with the Spanish Catholic magazine Omnes, he said the following:


On this subject, I have often said to the bishops that we have spent the last fifty years preparing the translation of the liturgical texts; and now we must move on to the second phase, which is already foreseen by Sacrosanctum Concilium, and that is the inculturation or adaptation of the Liturgy to the other different cultures, while maintaining unity. I think that we should start this work now. But I would like to point out that today there is only one [other Novus Ordo] liturgical “use,” not a “rite,” and that is in Zaire, in Africa.
It is important to understand what it means that Jesus has shared our nature, and in a historical moment. We have to consider the importance of the Incarnation and, if we can say so, of the action of grace being incarnated in other cultures, with various expressions that are completely different from what we have seen and appreciated in Europe for so many years.

Are we surprised, then, to hear similar language, yet less diplomatic and more aggressive, in the self-appointed czar of the reformists, Andrea Grillo? In a reflection he posted for the one-year anniversary of Traditionis Custodes, Grillo writes (as quoted by Luke Coppen of The Pillar):


It is about releasing the true energies of ritual language (verbal and non-verbal) as the culmen et fons [summit and source] of all the action of the Church. Today this happens no longer primarily in Latin and in a rite of priests and not of the assembly, but in many languages whose cultures have entered, for 60 years, into the common patrimony of the great ecclesial tradition. A Church that wants to ‘guard the tradition’ must not be afraid of the different cultures with which we can experience faith and express our creed today. This ‘communal table’ will be able to make it possible to assess the limits of what has been done so far and boldly take the way forward on the level of verbal and non-verbal languages. A great construction site can open up: for the tradition of guarding by walking forward, not backward.

When I read such things, my mind wanders back a few years to an intriguing conversation I once held with an older priest who had done his liturgical studies at Sant’Anselmo in Rome in the 1970s. He had the rare good luck to be able to go out to lunch one day with Annibale Bugnini shortly before the latter’s fall from grace. My friend told me that Bugnini, a regular raconteur at the table, finally came around to the topic of the liturgical reform.

The mastermind of the Consilium said to him essentially this:


What you need to see is that the new liturgy involves three stages. First, we had to eliminate the old way of doing things. This was mainly the work of the 1960s, and in thirty years’ time, everyone will have forgotten what came before. Second, we had to create something new for the time being: this is what people are calling the ‘Novus Ordo’. But even this must disappear, giving way to… complete inculturation: every liturgy should be made by the community, for its own immediate needs. No liturgical books, just like it was in the ancient church! Even my Mass will disappear, by the year 2000.

Readers familiar with the immediate postconciliar literature will recognize, in this vision, the viewpoint given eloquent expression by Joseph Gelineau, SJ: that the liturgy is a “permanent workshop” (Grillo’s “great construction site”). Not deceived by the siren song of inculturation, Dom Hugh Somerville Knapman puts his finger on the inevitable result:

The progressive element among the reforming liturgists saw the 1969 missal as but a stage — a significant one, mind you — in the new project of reconstituting the liturgy as something that contin­ually adapts to the age in which it is celebrated. As we have seen, the result is that the liturgy generally degenerates into reflecting the age rather than speaking to it and sanctifying it. Or more to the point, radical deformations of the liturgy reflect not the face of Christ but the face of the dominant person or clique that imposes them, and so become vehicles not of worship but of narcissism, the cult of self which is the de facto creed of postmodern western soci­ety…. We are rootless and thus heartless, replacing self-sacrifice with self-service, with self as the only moral absolute, its inescap­able subjectivity and impermanence denying the absolutism it demands for itself. Its secondary absolute, novelty, suffers the same inherent flaw.

Here we can see that Bugnini was no prophet. By the year 2000, the Novus Ordo was still plodding along in its thousand vernaculars, subject to widespread abuse and feeble attempts at community customization that never amounted to much more than a presider’s or a committee’s vague and often silly ideas about what a celebration “for us” should look like. In short, one might call it creative mediocrity or mediocre creativity, but it was a far cry from the lunchtime prognostication.

In Roger Buck’s entertaining romp The Gentle Traditionalist Returns, there is a point in the imaginary conversation where a thoroughly modern person objects that GT (i.e., the Gentle Traditionalist) is nothing other than a medievalist, an escapist, a nostalgic. In reply, GT explains why he loves tradition in its totality—from every stage, every place, every period, every culture through which the Catholic religion has passed, not limiting himself to the medieval age but not willing to limit himself to modernity either, particularly because it seems to operate under an oddly reactionary mentality that traps it in a little box marked “Now”:


Well, the medieval era is an important stage in Catholic tradition. But it’s just one stage. Catholic tradition covers 3,000 years—not just modern media culture! It begins with the Old Testament, becomes infinitely enriched by the Gospel, takes in Greek thinking with the Patristic era, develops through the so-called “Dark Ages.” Then comes the medieval era. Finally, the tradition significantly develops in modern times, as well. That, my dear fellow, is the whole point to Tradition—respecting three thousand years of Divine Revelation and dedicated human effort to engage that Revelation. Three thousand years of prayer, thought, study, sacrifice—indeed blood, sweat and tears. But all that, I know, is just three thousand years of encrusted patriarchal baggage to you. (p. 126)
You see why the destruction of tradition troubles me. One so easily gets enslaved to the present moment. All this “Power of Now” stuff is dangerous, if you ask me. It’s also arrogant. Thousands of years of human insight, human enquiry, human intellectual and spiritual endeavour—not to mention Divine Revelation—thrown to the winds. And why? Because it didn’t jive with the Baby Boomers after the “Summer of Love”? (pp. 129–30)

The liturgy so prized by Roche & Co. is — contrary to their mindlessly-repeated claims about breadth of inclusivity and depth of sources — staggeringly provincial in time and space, reflecting the preoccupations of mid-twentieth-century liturgists of postwar “enlightened” Europe, through whose filtration devices every item of ritual and rubric had to pass.

To the future cardinal, we express our modest and humble opinion: we do not want this Bugninian futuristic indigenous/cosmopolitan self-inculturated workshop. Its first iteration failed, and the current geriatric fad for attempting to revive the mimeographed agenda of the reformers not only fails to enthuse, it positively nauseates most of us who still frequent the pews, study in seminaries, or go in unto the altar of God — unto God who giveth joy to our youth. 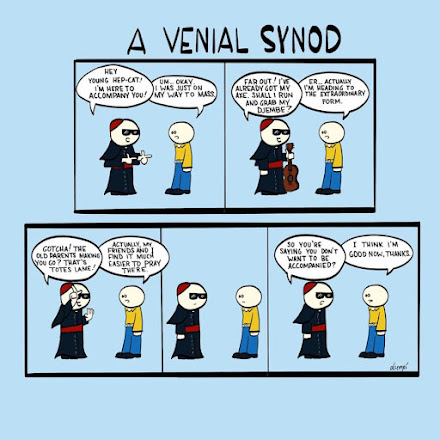 (Since this article was first drafted, there have appeared several articles of great relevance to the question of inculturation: see here, here, and here.)