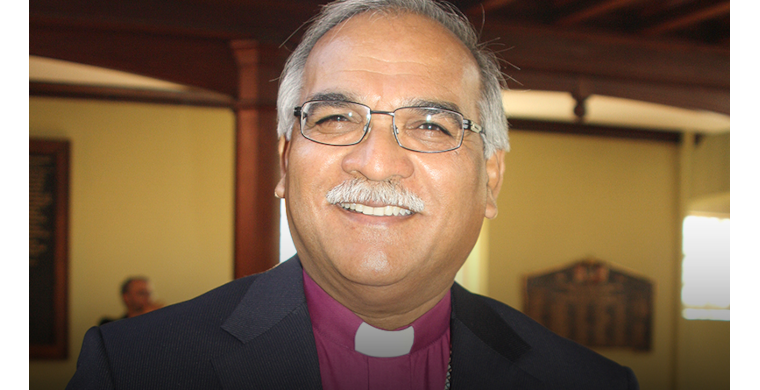 The Church of Pakistan is clearly orthodox and biblically based. We are the product of missionaries from CMS, USPG, the Methodist Missionary Society and the Lutherans. We are biblical, orthodox and missional. We have not given up on the mission of Christ and the Great Commission. We brought the same witness to the Lambeth Conference where we met likeminded people who have been encouraging to us as well. It is good to know others are taking the stand like we do in the middle of difficulties.

SUGDEN: How has the conference helped the Church of Pakistan?

End to forced and under age-marriage

AZAD: We raised our issues. We hope the Global Body of Christians who heard me share those points for support and be praying for us. Perhaps there will be the possibility of further support and proper steps that will be taken.

The conference made a formal statement of support for a number of our concerns: for instance, for an end to forced and under-age marriage and proper legal protection for all girls and particularly those from minority communities so that their physical and religious freedoms are not violated. I have been to the Pakistan Supreme Court on this issue to seek a change in legislation to protect poor and vulnerable Christian and other minority girls so they will not be subject to this heinous atrocity and crime.

Our girls are being lured into marriages with older men from the majority community by being made to believe they will have a better future. Some are also forced into such marriages by being kidnapped. They disappear for months and we do not know where they are and what happens to them. If we do not go to court we cannot recover them. We are asking the government to be allowed to have our own shelters so that when they are produced by the court order we can help them overcome the trauma and also build them up and disciple them again. We want to start a helpline so we can be called, immediately intervene and take legal action. Legal advocacy is very costly. This needs a lot of support so we can provide such shelter, have this helpline and provide trauma counselling for these victims. We have to advocate for these poor people, otherwise they have no hope.

SUGDEN: End to abuses of the blasphemy law

Islamic scholars and civil society activists do see that this current law is being used to punish people and agree this should be stopped. We have positive relations with Muslim leaders. The Christians are a very visible community. For the first thirty years of independence since 1947 Christians had the best schools and colleges where most of the leadership of Pakistan have studied. In 1970 these were nationalised and things changed. Even now Christians are recognised as a blessing to the country. So it is not difficult to talk with Muslim scholars. But now there are people are using religious emotions against Christians for their own interest.

AZAD: Lastly the conference supported our call for “Western aid to be accessed by minority religious communities in Pakistan so that they have equal opportunity to access funding for education and development.” The CoP never hears that the minorities are given any share in EU and UK aid given for education and development. We want a clear understanding through the leaders of the minorities and churches that our people should benefit from it to build capacity through the aid that the government receives.

The Rev. Dr. Chris Sugden is a trained evangelical missiologist who spent a number of years as a missionary in India. He is an independent journalist

PAKISTAN: Anglican Primate Reflects on Lambeth and the Issues Facing his Country
An interview with Bishop Azad Marshall, Primate of the Church of Pakistan

SUGDEN: What was good about the Lambeth Conference for you and for your Church?

AZAD: The Church of Pakistan (COP) is facing a lot of problems because of the human rights situation and extremism that puts down the minorities who do not have equal opportunities. So it is good for us to be identified with a global family of churches. This shows that the small minority of Churches in Pakistan have a link with international and global bodies who believe in the same truth and reality, worship together and are concerned about their brothers and sisters in Pakistan. Previously the Archbishop of Canterbury has visited Pakistan and met national leaders including our President, Prime Minister and Chief of Staff, the Head of the Army. That helped to raise our voice and reach the leadership as it sometimes becomes difficult to get our point of view to them. A sense of isolation was broken. He was very well received not only by the COP, but by other churches. National faith leaders and civil society all received him because he holds a traditional role. All his three predecessors have also visited.