September 24 on the 1962 General Calendar commemorates the Apparition of the Blessed Virgin Mary to St Peter Nolasco, confirming his mission to found a religious order that would ransom Christian captives. In the thirteenth century, Moors in Spain frequently abducted Christians and sold them into slavery. In response to this injustice, Saint Peter collaborated with Saint Raymund of Pennafort and King James I of Aragon to establish the Mercedarians, more formally known as the Order of Our Lady of Ransom or the Order of Our Lady of Mercy. The order included an office of Ransomer, a member designated to negotiate with slaveowners, and a fourth vow required by all members of the order to give oneself up as a hostage in Saracen territory if necessary to emancipate a Christian slave.

They had their work cut out for them. A Mediterranean slave trade fueled by abduction of the innocent is older than Homer’s Odyssey (8th c. BC), as the story of Odysseus’ loyal swineherd Eumaeus attests. In the Middle Ages, the trade was practiced primarily by Muslims. The Moors in Spain and the Saracens were among the first, and they were later followed (from the sixteenth to the nineteenth century) by pirates on the Barbary Coast in Africa, who sailed as far north as Iceland in 1627, killed 50 locals, and enslaved 400. It takes guts to go viking on former Vikings.
It was these same Barbary pirates, incidentally, who inspired the line “the shores of Tripoli” in the Marine Corps fight song. The pirates had been harassing American merchant ships (which were no longer under the protection of the British navy), and the new nation responded with the First Barbary War. It was Lieutenant Presley O’Bannon and his Marines who hoisted the Stars and Stripes on the soil of the Old World for the first time during the Battle of Derna in 1805. 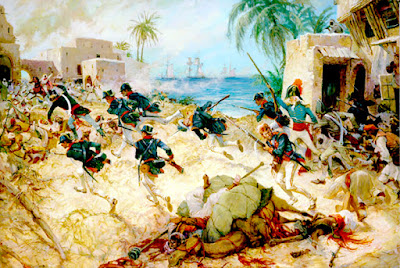 Charles Waterhouse, “Attack on Derna”
As for the Mercedarians, they remained active in ransoming Christian captives, but after the discovery of the New World, they also became zealous missionaries in Latin America. Christopher Columbus himself brought the first Mercedarian friars to the Western hemisphere, and before long Latin America had eight Mercedarian provinces to Spain’s three and France’s one.
Today the Mercedarians, as one of their websites puts it, focus on rescuing

others from modern types of captivity, such as social, political, and psychological forms. They work in jails, marginal neighborhoods, among addicts, and in hospitals. In the United States, the Order of Mercy gives special emphasis to educational and parish work.[1]

And as the Order’s raison-d’etre has changed or evolved, so too has its fourth vow, which is now “to free from the new forms of slavery the Christians who are in danger of losing their Faith.”Devotion to Our Lady of Ransom has changed as well. She of course remains patron of the Mercedarian Order and of Barcelona, Spain, where the Order was first constituted. Sicily has a special devotion to Our Lady under this title because the island suffered much at the hands of the Saracens. And the most important Marian shrine in India is the National Shrine Basilica of Our Lady of Ransom in Vallarpardam, Kochi, in the region of Kerala. 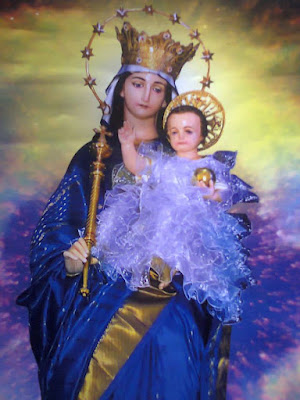 Alanbrindo, “Our Lady of Ransom in Indian Tradition,” 2015
More recently, Our Lady of Ransom has been conscripted to re-evangelize Great Britain, or most of it. In 1887, the Guild of Our Lady of Ransom was established for the “conversion of England and Wales, the restoration of the lapsed, and prayer for the forgotten dead.” The founders saw a parallel between the Mercedarians’ original mission and their own, which is to make England once again Our Lady’s Dowry by “ransoming individuals from the darkness of unbelief and heresy into the light of the Catholic Faith.” [2] The Guild’s first two priests to join were Archbishop of Westminster Cardinal Manning and St. John Henry Newman.
The changing missions and clients of the Mercedarians and Our Lady of Ransom remind us that it is sometimes possible and even necessary to put old wine into new wineskins, or at least to apply old devotions to new problems. For instance, one can easily see Our Lady of Ransom being invoked in the war against the global scourge of sex trafficking, the most obvious successor, it seems to me, of chattel slavery. No doubt this new iteration of enslavement must be met with a different skill set than what the Order of Mercy currently possesses, but that should not stop the Church as a whole from offering prayers to Our Lady of Ransom on the behalf of these new victims.
On the other hand, the Collect for the feast reminds us of one kind of enslavement that never changes:

Which I translate as:

O God, who through the most glorious Mother of Thy Son hast deigned to increase Thy Church through a new offspring for delivering Christ’s faithful from the power of the heathen: grant, we beseech, that we who piously venerate the founding of so great a work may, through its merits and intercession, be equally delivered from all sins and from the captivity of the demons. Through the same Christ our Lord.

The prayer nicely contrasts the captivity of demons with the enslaving power of the Muslim captors–who, rather than being seen through the rose-colored glasses of post-conciliar interreligious dialogue, are curtly called pagani or heathen.
But the Collect’s petition is for ourselves rather than the unjustly subjugated. It is a nightmare to imagine being enslaved, to be deprived of basic rights that we take for granted and to be exploited like livestock. And yet in every day and age, there is a horror even worse than the chains and lashes of the slaver. Sin and Satan’s reign constitute an even greater tyranny than the dehumanizing institution of chattel slavery, and so we pray, always and everywhere, to be delivered from the fiend’s minions and his vices as if our very lives depended on it. Our Lady of Ransom, continue to pray for us.
Notes
[1] https://www.orderofmercy.org/about
[2] https://web.archive.org/web/20160304091611/http://www.guild-ransom.co.uk/index.html