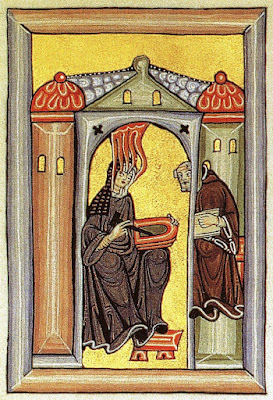 In this illumination from Hildegard’s Scivias (1151), the saint is receiving a vision and recording it with the help of her secretary Volmar.

Saint Hildegard of Bingen (1098-1179), whose feast day is September 17, is one of the Church’ most accomplished canonized saints, and was proclaimed a Doctor of the Church by Pope Benedict XVI in 2012. Born into a noble German family, she entered the Benedictine cloister of Disibodenberg before founding her own convent at Bingen. Even in childhood, Hildegard had mystical visions. In 1141, she had a vision that commanded her to “cry out and write.” With the help of her secretary Volmar, Hildegard wrote the Scivias, short for Sci Vias Domini or “Know the Ways of the Lord.” Near its completion, she turned to Saint Bernard of Clairvaux for advice, who assured her that she was not being duped by the devil. Soon after, Pope Eugene III read an early manuscript of her visions and publicly endorsed them.

The Scivias cemented Hildegard’s reputation as a prophetess–not so much in the sense of predicting the future (although she does have statements about the End Times and the Antichrist) but as someone who receives messages from God. (Her nickname is the Sibyl of the Rhine.) Abbots, abbesses, bishops—all turned to her for advice, as her over 300 letters attest. Despite chronically bad health, Hildegard also went on four preaching tours throughout Germany. In public forums and religious chapter houses, she denounced clerical corruption and called for reform. She was also a master herbalist who wrote extensively on botany and medicine. The plant genus Hildegardia is named in gratitude for her work in herbal healing.

Hildegard wanted her nuns to become holy through a rich liturgical life, and so she composed at least seventy hymns (both the music and the lyrics, which is rare) for her convent, making her one of the best and most prolific composers of the Middle Ages.

One musical accomplishment in particular stands out in her corpus: the theatrical performance Ordo Virtutum. The play is groundbreaking. It is the world’s first morality play, wherein the Soul and Virtues are personified as characters on the stage. It consists of 87 different songs, all of which draw from Gregorian chant, but which depart strikingly from the centonate chant of the Roman Graduals and Tracts. In a break from a long tradition in the West (ancient, medieval, and Renaissance), most of the characters are played by women. And since the first edition of this play appeared in the Scivias, we may even wonder if it is the first instance of theater co-written by the Holy Spirit.

This performance of Ordo Virtutum remains faithful to Hildegard’s composition and basic costume ideas, except for the random ballerina.

The Ordo Virtutum is one of the first medieval plays that does not stem directly from the Mass or Divine Office, but that does not mean it lacks liturgical resonances. The title says it all: it is not, as is often translated, the “Play” of the Virtues but rather the “Rite” or “Ordinary” of the Virtues. And when the play was performed, it was performed in the sanctuary of the church.
Ordo depicts the Soul (Anima) capitulating to the devil rather than joining the Virtues in the tough work of spiritual combat. Anima absconds with the devil but eventually returns, stinking with “wounds inflicted by the ancient serpent.” The Virtues rally to her cause and bind Satan. Each of the Virtues sings a beautiful song about herself; the only character who does not sing but speaks is the devil (who is played by a man). As Hildegard explains elsewhere, only humans and angels sing.
Although the play has a simple, even simplistic, plot, it evinces profound insight into the moral psychology of a soul that turns away from God. And Hildegard’s depictions of the virtues are as counterintuitive as they are sagacious, for she characterizes the virtues as God must see them, not as sinful humans do. The lowly virtue of Humility, for example, is the Queen of the virtues, Contempt-for-the-World has a radiant zest for life, and Chastity, far from being a prude, burns to enter the King’s embrace. Ordo Virtutum is an excellent example of the artistic impact of the biblical narrative of creation-fall-redemption, and likewise, of the sacred liturgy as a schooling of desire and imagination.