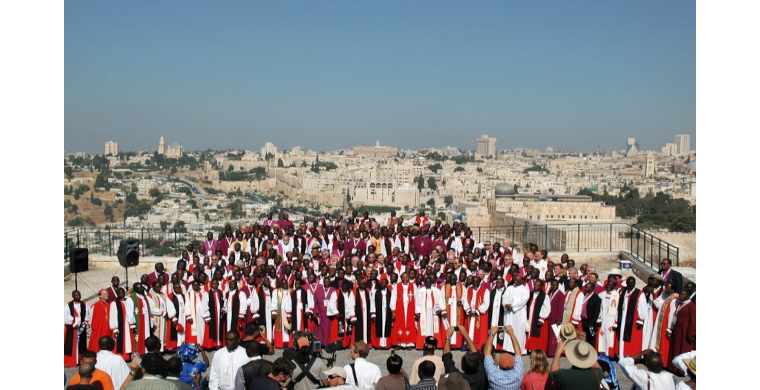 “How lonely sits the city that was full of people! How like a widow has she become, she who was great among the nations! She who was a princess among the provinces has become a slave.” (Lamentations 1:1)

I begin this piece as the news comes out from the bishops of the Church of England “Living in Love and Faith” report (20 January 2023). Although I and others saw this defilement of God’s holy estate of matrimony coming inevitably, still, as a Christian and an Anglican, I mourn for this great church and the communion of churches she fostered.

Almost fifteen years ago, shortly after GAFCON 2008, I hosted a meeting of the Gafcon Theological Resource Group in Uganda. In my opening remarks, I warned that the Church of England was heading down the same road as the American Episcopal Church. Here are the milestones on that road:

–In 1979, the General Convention stated: “we reaffirm the traditional teaching of the Church on marriage, marital fidelity, and sexual chastity as the standard of Christian sexual morality.” The House of Bishops reaffirmed this position in 1990, noting that “not all members of the church agree with this position.”
–In 1991, following the ordination of an openly gay man by Bishop Walter Righter, the House of Bishops initiated a study process called “Continuing the Dialogue,” which undermined the traditional teaching, even as further rogue ordinations continued. In 1996, conservative bishops sought to discipline Bishop Righter for violating his ordination vows and church canons, but the church court acquitted him. There were no further trials.
–In 2003, after most of the American bishops had denounced Lambeth Resolution I.10, the Episcopal Diocese of Vermont elected V. Gene Robinson, an openly practicing homosexual, as bishop, the General Convention approved his election, and he was consecrated by the Presiding Bishop. This act led to a series of fruitless meetings of the “Instruments” of the Anglican Communion, which in turn led to GAFCON 2008 and the formation of the Anglican Church in North America.
–In 2012, the Episcopal Church approved same-sex “blessing” rites and added “gender identity” to the non-discrimination requirement for clergy and lay leaders.
–In 2015, when the U.S. Supreme Court approved same-sex marriage, the Episcopal Church immediately approved rites for same-sex marriage. So from 2015, it became illegal for bishops or vestries to oppose legally married or LGBT candidates for any office in the Church.
–In 2020, when Bishop William Love challenged this ruling in his diocese, he was overruled and soon thereafter left the Episcopal Church.

Now that which I and others feared has happened. The Church of England is proposing to bless in God’s name a practice that is consistently and explicitly condemned in the Old and New Testaments, which is contrary to nature and to the universal tradition of the church, which overturns the teaching of the Prayer Book (“avoidance of fornication”) and the Ordinal (“drive away from the Church all erroneous and strange doctrines”), and which spits in the face of Lambeth Resolution I.10 and those members of the global Anglican family that hold it as true and authoritative. By adopting “Living in Love and Faith,” the Church of England has broken faith with the Communion and is making its bed with the Episcopal Church and before long it will erect the final milestones on the road to perdition.

At the global level, the current Archbishop of Canterbury protests that he has no authority to interfere in the affairs of the “autonomous” provinces of the Anglican Communion and, conversely, that these provinces have no authority to interfere in the autonomy of the Church of England. This being the case, he claims, the only option facing those who oppose the new Anglican way is “walk together” in “good disagreement.”

While it is true that the Communion was founded on an imperfect basis, with Lambeth not being a true council and Canterbury having no “legal” power of enforcement, nevertheless it got along reasonably well for more than a century until the rise of radical theologies in the 1960s and the moral practices in the West that accompanied them. At Lambeth 1998, these divergences came to a head, with the large orthodox majority laying down a moral norm regarding sexuality and marriage.

Is there any way that the Archbishops of Canterbury could have averted the division that followed on from 1998? I think they could have. Although the office of Archbishop of Canterbury has been accorded a bully pulpit as “first among equals” and “focus of unity,” along with the purported authority to recognize who is “in communion” and who is not, each occupant of that office has failed to exercise this authority decisively. Had George Carey called on the dissenters from Day One to uphold Communion teaching (or else!), had he supported the two Global South Primates who proposed a disciplinary framework in 2002, the division and realignment in North America might have looked quite different. Had Rowan Williams not reneged on his promise at the 2007 Dar es Salaam Primates Meeting to discipline the Episcopal Church, the Global Anglican Future Conference and Lambeth 2008 might have been less confrontational. Had Justin Welby deigned to notice Gafcon (at all) and act on its plea to invite ACNA bishops to Lambeth 2020, a united Global South, absent three African provinces, might not have been dismissed so peremptorily.

But they would not. Instead they avoided confrontation by means of “processes” with high-sounding titles (“Windsor,” “Covenant Working Group,” “Living in Love and Faith”) which were guaranteed to avoid hard decisions and even to push forward the progressive agenda with “smooth talk and flattery” (Romans 16:18).

Of course, the Church of England has its own peculiar problems, being yoked to a state whose current ideology is contrary to the historic Christian faith. How this will ultimately play out, I do not know. What I do know is that in choosing “autonomy,” the Church of England and the Archbishop of Canterbury have forfeited their authority to lead the Anglican Communion. What a tragic loss this is!

Two hundred years ago William Wilberforce, the crusader against slavery and social reformer, wrote: “We live in difficult times. We have all the marks of a declining civilization. Pray that the God who hears and answers the prayers of His people might intervene on behalf of our country and bring a spiritual renewal that might save the nation.”

I am proud of the Anglican heritage. I would choose no other way of following Christ. I love the moderate yet biblical formularies and liturgy, the poets and apologists, the cathedrals and parish churches, the English hymnody of Watts and Wesley, Neale and the Gettys, the mission history which flowed from England to the ends of the earth.

Many, many Anglicans worldwide feel likewise. One of my colleagues at Uganda Christian University, the author Timothy Wangusa, penned several affectionate yet ironical vignettes when he was a student in England:

When therefore I consider the towers, the underground tubes, and the slot machines that man has made, what is God, that man should regard him? Oh, it is Sunday, and time for Church.

I knelt by you. Sang with you.
And the bread that we break,
And the cup that we bless
Passed from you to me.
Then we reached for our umbrellas
And passed out into the rain
Quietly. Separately. Quickly.

But this Sunday morning it is a South Korean missionary preaching at St. George’s parish church, near Leeds infirmary: “And if England will not re-awaken to its former calling and to the fear of God, then I am afraid that GB (Great Britain) will soon become SB! [Small Britain]” How outrageous! More discourteous than prophetic, you might say. What a missionary to the mother of missions!

For those of us who grieve, even from afar, over the state of the Mother Church, the question arises: when will the Lord “restore the fortunes of Zion” (Psalm 126:1)? It is encouraging no doubt that William Wilberforce’s prayer for England was answered in part in the following century with the abolition of the slave trade and the moral and social reforms — and the great missionary expansion. This is what I call a “Hezekiah moment,” as when King Hezekiah on his sickbed “turned his face to the wall” in repentance for Judah’s faithlessness and God granted a stay of judgement (2 Kings 20:1-11). But this stay was followed by a century of even worse idolatry — including child sacrifice — under his son Manasseh; and when Hezekiah’s righteous great grandson Josiah sought to reform the nation once again, he was cut off in battle because of the sins of Manasseh. This time, God said, “I will cast off this city that I have chosen, Jerusalem, and the house of which I said, ‘My name shall be there’” (2 Kings 23:26-27).

Are we at such a “Josiah moment” today? God only knows. May He have mercy on the Ecclesia Anglicana. And on the Anglican Communion.

AUTONOMY, AUTHORITY, AND THE CRISIS OF CONTEMPORARY ANGLICANISM: Thesis 2

This is the second of FOURTEEN THESES TOWARD REVIVING, REFORMING, AND REORDERING THE ANGLICAN COMMUNION, with Commentary.

Thesis 2
While the Anglican Communion inherited much of its theological DNA from the classic Reformation formularies, its governing structure was determined by the colonial requirements of the Established Church of England, where ultimate authority is vested in the state. Hence from its inception, the Communion came to be defined as a loose association of autonomous “provinces,” with the Lambeth “Conference” of bishops having no real authority over member churches in matters of doctrine and discipline.