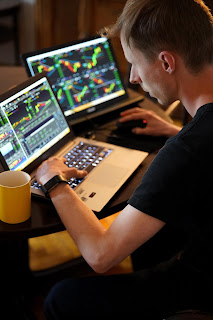 Three weeks ago, we began following Iron Mountain (NYSE: IRM), a Real Estate Investment Trust (REIT) whose core business is documents management. While the company is best known today for archiving the paper records of large corporations, it has been increasing its investments into electronic records management technology to expand its business in the digital age.

The reason we chose this particular company to follow is because it appeared to be on the cusp of pursuing one of two potential paths with respect to its dividend policy. IRM’s stock price had been crushed with the coronavirus pandemic in 2020, where the company’s market cap with respect to its aggregate dividends had fallen below its historic range.

So much so that, one week before its 2020-Q3 earnings call with investors, the level of its market capitalization suggested it had a strong chance of either cutting its dividends per share by a third or holding its dividend steady with a slim possibility of a small increase. The latter scenario assumes the firm had been successful in restructuring its debt during the previous three months, which would free up funds to sustain its generous dividend.

Iron Mountain’s 2020-Q3 earnings call then came and went on 5 November 2020. The company’s management chose the second path, which allows us to update the visual assessment of the relative value of the company’s market cap with respect to its aggregate dividends against the historic backdrop of the relationship between these two financial measures during the past ten years. 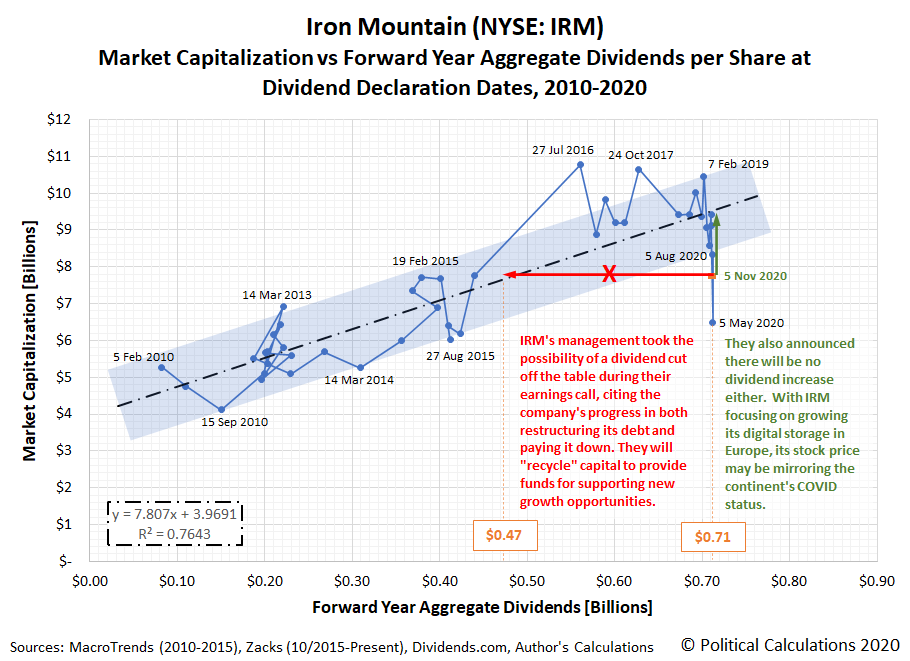 IRM has taken advantage of falling interest rates prompted by the pandemic to restructure much of its short term debt, which has taken the prospect of a significant dividend cut off the table at this time. Here’s a relevant excerpt of CEO William Meaney’s comments on the topic from the transcript of IRM’s 2020-Q3 earnings call:

Turning to cash flow and the balance sheet, we are operating from a position of significant balance sheet strength. In the third quarter, our team did a nice job delivering further cash cycle improvement with solid performance in both payables days and days sales outstanding. On a sequential basis, cash cycle improved by a full day as a result of continued DSO improvement. In August, the team executed another successful bond refinancing, issuing $1.1 billion to redeem our most restrictive outstanding debt and pay down a portion of the outstanding balance under our revolving credit facility.

The continued strong support received from the fixed income community provided us the opportunity to upsize our transaction while printing the lowest coupon for 10-year notes in the company’s history. Taken together with our bond offerings in June, we issued $3.5 billion of new debt on a leverage-neutral basis, increased our weighted average maturity by over two years to nearly eight years, while only modestly increasing our weighted average cost of debt.

Additionally, these new bonds are more in line with our REIT peers as they include a fixed charge coverage ratio as opposed to a debt to EBITDA covenant. Also, I think it is worth noting that we have eliminated all of our 6.5 times leverage covenant bonds, meaning our most restrictive bond covenant is now 7 times debt to EBITDA.

At quarter end, we had $1.7 billion of liquidity. As a reminder, at the end of the second quarter, we had elevated levels of cash on our balance sheet due to the timing of the payoff of one of our notes from the June bond offering. We paid off the notes in early July, leaving us with a cash balance at September 30 of $152 million.

We ended the quarter with net lease adjusted leverage of 5.3 times, which takes into account adjustments as described in our credit facility. Looking ahead, we expect to end the year with leverage of approximately 5.5 times, which would represent an improvement year-on-year as we make progress towards our long term leverage range.

That’s important because companies generally need at least one of two things to be positive to sustain their dividends over time: their earnings and their cash flow. IRM priortized restructuring its debt to reduce the pressure it presented on its cash flow, which allows it to preserve its dividend, which it left unchanged. Here’s Meaney’s comments on that subject, which immediately followed his comments on IRM’s debt restructuring:

With our strong financial position, our board of directors declared our quarterly dividend of $0.62 per share to be paid in early January.

Turning to capital expenditures, our full year expectation is now approximately $450 million, or a decrease of $75 million, reflecting development capital for our Frankfurt data center that will now be a part of our venture with AGC.

Meaney continues describing how IRM’s plan to sustain its dividend can be maintained while the company continues to expand its electronics records management business line:

As investors know, we have been allocating significant capital to our data center business for several years, and as our pipeline continues to build with high return investment opportunities, our strategic intent is to increase the amount of capital we dedicate to the business. With that, we have considered options to generate incremental funds for investment.

We view capital recycling as a good means to monetize certain assets, particularly industrial real estate to increasingly invest in our development pipeline. Industrial cap rate are at historically low levels, and we have the opportunity to structure long term leases on favorable terms that effectively allow us to have control of the facilities, whether we lease or own. With that, in the third quarter our team accessed the market and monetized two facilities for proceeds of approximately $110 million. This brings our year-to-date proceeds to nearly $120 million, ahead of our full year target of $100 million.

With the highly favorable market backdrop together with our development pipeline, we are planning to recycle relatively more going forward, albeit what will amount to a small portion of our total industrial assets. Similarly, we view selling stabilized data center assets into a joint venture as analogous to monetizing industrial real estate assets – it represents another source of capital to redeploy into development projects. The joint venture we just announced in Frankfurt is a good example of this strategy. The JV provides us with an opportunity to boost returns on stabilized assets and provides incremental capital to allocate to projects in the development phase.

We think Iron Mountain’s plan minimizes the risk of a dividend cut but doesn’t eliminate its exposure to other factors that might ultimately lead to that outcome. While the company’s stock saw a boost to $27.48 per share on the day of the earnings call, in the two weeks since, it has fallen by 5.7% to $25.90 per share.

That fall largely coincides with the introduction of new lockdown measures in Europe to try to bring the spread of new coronavirus infections down to levels where its national health systems are capable of managing it. It has also occurred despite the major announcements of two COVID-19 vaccines with greater than 90% effectiveness in their Phase 3 trials, which will start being distributed before the end of 2020 and have hundreds of millions of doses distributed worldwide in 2021.

That makes IRM’s stock more interesting than what we realized when we first selected it to follow. Following its recent stock price history, we find it has risen and fallen with the waves of coronavirus infections in the regions Iron Mountain does business, which makes it something of an indicator of how investors anticipate the coronavirus pandemic will affect business activities upon the company’s large, established customer base, and by extension, the firm’s revenues.

In maintaining its current dividend level, Iron Mountain stands to gain substantially if its stock price and market cap recovers to levels consistent with how investors have historically valued the company’s dividends. But unlike stocks whose prices have risen on speculation from recent vaccine development news, we think Iron Mountain’s stock price is reflecting what they anticipate for its actual business conditions in the year ahead.

That makes investing in IRM a COVID-19 play, or rather, a bet on the future for the coronavirus pandemic’s real world impact on business activities. Knowing where the company stands today, how would you place your bets on its future?