In our previous posts, we revisited and validated our version of Okun’s law for the USA, Canada, Germany, Australia, and France with new GDP and unemployment data the years between 2010 and 2019. In all five countries, the revised model accurately describes the new data, i.e. the original model is validated. In order to reach the best fit between the measured and predicted unemployment rates, we introduce structural breaks related to the change in real GDP definition. To illustrate the breaks in the real GDP data (i.e. nominal GDP corrected for the price change) we compare price inflation estimates as defined by the GDP deflator and CPI. The latter is considered as a reference. It is also important that the goods and services in the CPI are parts of the GDP deflator, dGDP. In the past, the CPI and dGDP were almost equivalent.

In this post, we apply the same approach to Austria and start with the CPI and GDP deflator difference, which is used to reveal definitional breaks in the dGDP estimates. Obviously, such breaks in the dGDP create breaks in the real GDP per capita estimates, and thus, in the statistical estimates associated with our model. One needs to find such breaks and allow the model to compensate for corresponding disturbances.  In panel a) of Figure 1, we present the evolution of the cumulative inflation (the sum of annual inflation estimates) as defined by the CPI and dGDP between 1970 and 2018 (the OECD data). Both variables are normalized to their respective values in 1970. The dGDP curve is close to the CPI before 1982 and then some low-amplitude deviations are observed. After 1995, the deviation increases in amplitude and the dGDP is below the CPI curve – an indicator of good economic performance similar to that observed in Germany since 1996.   In panel b), the inflation rates are shown for both variables. In panel c), we present the difference between the CPI and the dGDP cumulative inflation curves in panels a) and b) and suggest the presence of breaks in 1982, 1996, and 2007. Panel d) of Figure 1 presents the original CPI curve and the corrected dGDP curve. The fit is good. As a result, our modified Okun’s law model is allowed to have breaks in 1982, 1996, and 2007. 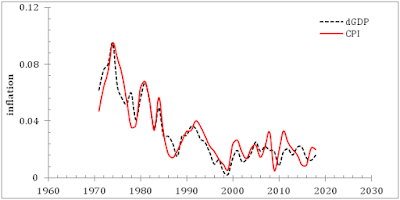 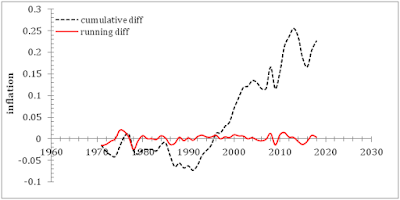 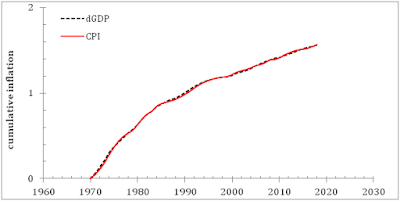 Figure 1. a) The evolution of the cumulative inflation (the sum of annual inflation estimates) as defined by the CPI and dGDP between 1970 and 2018. Both variables are normalized to their respective values in 1961.  b) The dGDP and CPI inflation estimates. d) The difference between the curves in panels a) and b). One can observe the breaks in the difference between cumulative curves. We propose the breaks in 1982, 1996 and, 2007.  d) The fit between the CPI and the dGDP cumulative inflation curves after correction of the latter in 1982, 1996 and, 2007.

In our model, we are looking for breaks near the years and obtain the following intervals and coefficients:

where dup – one-year change in the (OECD) the unemployment rate, G – real GDP per capita (2011 prices). The break years in Figure 2 are the same as estimated from the inflation curves in Figure 1. The overall fit is shown in the upper panel in excellent, as confirmed by the residual errors in the middle panel and the regression (Rsq=0.92) of the predicted and measured employment between 1970 and 2018. We retain in mind that the estimates of the unemployment rate are obtained in the surveys. The unemployment values are also corrected in the revisions to the unemployment definition (e.g., Austria did not include in unemployment those who had no job before, i.e. graduates). 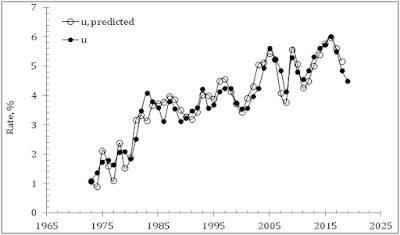 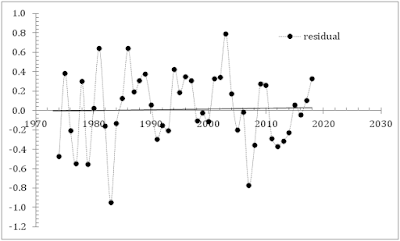 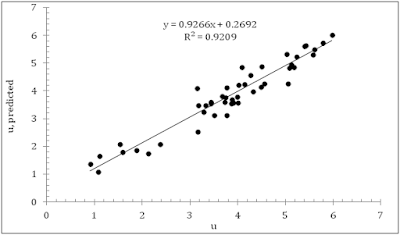 Figure 2. Upper panel: The measured rate of unemployment in Austria between 1970 and 2018, and the rate predicted by model (1) with the real GDP per capita published by the MPD and the unemployment rate reported by the OECD. Middle panel: The model residual: stdev=0.37%. Lower panel: Linear regression of the measured and predicted time series. Rsq. = 0.92.