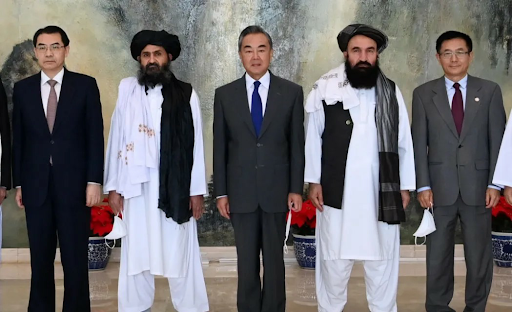 Out steps one empire, in steps another.

America invaded Afghanistan based on false pretenses and drummed up charges against Bin Laden, then hoped to pacify the war-torn country without a long-term strategy or the necessary amount of troops.

So it relied on selfish warlords and poorly trained Afghans to defeat a highly motivated insurgency whose numbers grew every year thanks to endless support from Pakistan.

Instead of confronting its Pakistan problem, Washington poured money into its coffers without anything to show for it. After twenty years of fruitless fighting it washed its hands of the disaster and delivered Afghanistan over to Pakistan.

What’s worse is that it dressed up its abandonment of the Afghan people by saying that the Taliban won a civil war on its own, failing to mention the crucial role Pakistan played in the war.

In steps China, who suffers no fools. Pakistan has no choice but to listen to China because it owns a large amount of Pakistani debt. Pakistan is basically a Chinese colony at this point.

And it’s not the only one.

The Chinese empire is using its money for strategic use, unlike Washington which wasted hundreds of billions of dollars on misguided wars.

China will use debt financing to bring Afghanistan to its knees and then take strategic areas of land as repayment, as it has done in Sri Lanka and other poor countries.

Beijing’s economic takeover is just the beginning. Chinese banks will be followed with Chinese tanks.

Professor John Keane of the University of Sydney wrote in “The New Chinese Empire” on June 27, 2019:

China’s global reach is, meanwhile, spreading fast. Unusually, the new Chinese empire is deeply entangled with the US and its partners. Beijing-financed mega-projects are reordering the lives of many millions of people, from South Africa, Nigeria and Sri Lanka to Cambodia, Chile and Hungary. The Communist Party-state economy has outflanked the US as the world’s largest trading nation. It is now Africa’s biggest trading partner and rivals the US in Latin America, where Chinese investment, extraction of resources and trade jumped tenfold in the first decade of this century. Global military and diplomatic operations are under way.

The Taliban hopes to play a key part in China’s plan to dominate the world.

An exerpt from, “Taliban rolls out red carpet to China’s Belt and Road Initiative” by Adnan Aamir, Nikkei Asia, September 12, 2001:

Zabiullah Mujahid, the Taliban spokesperson, said earlier this week that the new government wants to join the China-Pakistan Economic Corridor, or CPEC, the flagship $50 billion Pakistan component of China’s Belt and Road Initiative.

A source with close links to the Taliban told Nikkei Asia on condition of anonymity that China has been courting the Taliban since 2018 on possible projects in Afghanistan. “There are verbal agreements between Beijing and Taliban about investments,” he said. “Once the Taliban government gains global recognition, China will start building infrastructure projects in war-torn Afghanistan.”

The source expected China to be not much concerned about human rights — with those relating to women and girls most in jeopardy — and to be more focused on effective governance and dealing with Uyghur militants.

A secure and stable Afghanistan will enable China to expand its economic domination of the region. But China’s interest in Afghanistan is also related to its national security.

An excerpt from, “A ‘Strategic Apocalypse’ in Afghanistan: A Seismic Shift, Years in the Making” by Alastair Crooke, Strategic Culture, August 23, 2021:

China is more determined to shape the region than many analysts realise. It’ is often said that China is purely mercantile, interested only in advancing its economic agenda. Yet China’s Xinjiang province – its Islamist underbelly – shares a border with Afghanistan. This touches on state security, and China therefore will require stability in Afghanistan. It will not tolerate ethnic Turkic insurgents (spurred by the West) moving into or from Afghanistan into Turkmenistan or Xinjiang. The Uighurs are ethnically Turkic. We can expect China to be tough on this point.

Thus, not only have the US and NATO been forced to exit from the ‘crossroads of Asia’ in desperate disarray, but these developments set the stage for a major evolution of Russia and China’s economic and trade regional corridor plans. They also transform the security of central Asia in respect to Chinese and Russian vulnerabilities there. (The US, so far, has been denied an alternative military base in Central Asia, relocating its forces instead to Jordan).

To be fair, Michael Rubin was ‘half right’ when he said that “Rather than enhance America’s position against China, Biden has hemorrhaged it”, but only half right.  Because the missing ‘other half’ is that Washington was outplayed by Russia, China and Iran.  Western Intelligence failed utterly to see the new domestic Afghan dynamics – the external actors underwriting the Taliban’s negotiations with the tribes.

And they still do not see all the external dominoes falling into place around an Afghan pivot, that changes the whole Central Asian calculus.

China’s public commitments to Afghanistan may not mean much, but at least they have shown a willingness to lead the country out of poverty. Afghanistan needs economic investment and infrastructure projects, not more drone strikes that cause deaths of innocents most of the time.

In 1992, when the Soviet-backed Afghan government collapsed and chaos ensued, China was not ready to enter the fray and help the country get on its feet. Thirty years later, it is ready.

In the 1990s Pakistan took advantage of the absence of the great powers and ushered the Taliban into power without any plans to develop the country.

This time it’s different. Pakistan is more of the midwife. It has delivered Afghanistan to China, knowing in its own hands Afghanistan will amount to nothing more than a terrorist hellhole. At least the Chinese will build some roads.

Moving forward China will show more interest in Afghanistan than Pakistan because it is more strategically valuable.

In its war on terror, America prioritized Pakistan over Afghanistan. As students of history, the Chinese leadership won’t make that same mistake.

An exerpt from, “China’s Tang Dynasty and Afghanistan, the Graveyard of Empires” by Chan Kung, The Diplomat, August 28, 2021:

This example from China’s history helps us understand the crux of the Afghanistan issue. What attracts the attention of world powers to Afghanistan is not its minerals, gems, or opium, nor its diverse tribes and sects, although these factors provide the superficial surface of Afghanistan’s problems. We can see the real significance of Afghanistan to the world’s major powers in the fate of China’s Tang Dynasty. After losing Afghanistan, China was left in a weak and struggling state for more than a thousand years afterward, reducing it from a great global empire to a country that was constantly seeking to protect itself from encroachment.

Looking at the rise and fall of China’s dynasties, we can see that Afghanistan has played an incomparable strategic role in the expansion and influence of great powers throughout history.

Moving to today, China’s vision for reviving the ancient Silk Road – i.e. the Belt and Road Initiative – also hinges on Afghanistan. Early research at the BRI’s formation stage suggested that the heart of the world’s continental island is Afghanistan, not the surrounding powers such as Russia, China, or India. This means that whoever controls Afghanistan will have the dominant influence in the world’s continental island. China, historically a traditional land power, would pay a significant price as well as a high cost if it rashly commits to participate in the world competition for sea power. If China wishes instead to pursue dominance via the land, history teaches that Beijing will need to secure its influence in Afghanistan.

If America played its cards right, if it confronted the genocidal generals in Islamabad back in 2001 and obliterated the Taliban camps in Pakistan, then the course of its illegal war in Afghanistan would’ve gone more positively.
Instead of owning up to their errors in Afghanistan, Washington’s politicians blame their loss on Afghans themselves. Some make ridiculous statements about how Afghanistan can’t be remade through military force as if Afghanistan is some backward place.
It has to remembered that Afghan women got the right to vote in 1919. Afghanistan was a fairly progressive and modern country when it was under a monarchy.
Afghanistan was made backward as a result of U.S. policy and Pakistani interference. Along with Saudi Arabia, they pumped religious fundamentalism into the country, helping to spread the most hateful and sectarian aspects of Islam.
They made Afghanistan what it is today: one of the poorest countries in the world run by religious zealots and criminal terrorists.
What Afghanistan becomes in the future will depend on how wise and benevolent the new Chinese empire turns out to be.
Their superpower predecessors destroyed Afghanistan and left behind ashes. China will seek to rebuild it, at least parts of it, and never leave.