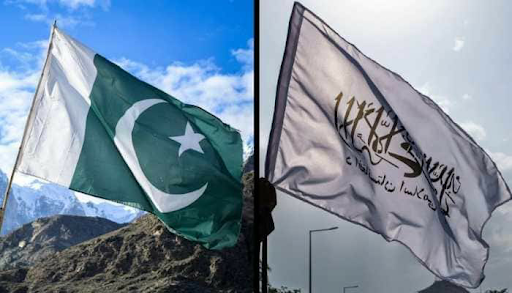 The war on terror was never fought. It was a charade.

The 9/11 attacks and the Bin Laden raid, the defining events of the war on terror, were both made for TV productions that advanced narratives for global public consumption but did little else.

The post-9/11 wars have all failed to bring about stability or even pro-American and pro-Western regimes in the Muslim world.

The Iraq war was a misguided adventure that generated endless terrorism in the region. And the wars in Libya and Syria created slave markets and Jihadist strongholds.

The one place where the war on terror needed to be fought is Pakistan, which is a nuclear state and a state sponsor of terrorism. But the U.S. and NATO opted to appease Pakistan rather than punish it.

Their asinine policy has led to the destruction and enslavement of Afghanistan. Pakistan, through its proxy the Taliban, has carved out the heart of Central Asia and offered it to China as a tribute.

Western appeasement of Pakistan has emboldened the crazy generals in Islamabad. Their so-called victory in Afghanistan has gone to their heads. They actually believe they’re an Islamic power that can take on India.

But Pakistan will never be able to challenge India. It is a small and pitiful power that relies on terrorism and cries that it is victimized every time it is called out.

Pakistan has taken a page out of the Israeli playbook by using the policy of nuclear blackmail to advance its strategic and political interests because it lacks conventional power and military superiority.

It holds its nukes over the world’s head because without them it would be left to its fate as a failed state.

It is time to call Pakistan’s bluff.

Concerned that Pakistan’s ethnic rivalries, corruption, and terrorism could one day tear the country apart, the Pentagon has developed a set of highly detailed plans to grapple with nuclear insecurity in Pakistan. “It’s safe to assume that planning for the worst-case scenario regarding Pakistan nukes has already taken place inside the U.S. government,” Roger Cressey, a former deputy director of counterterrorism under Bill Clinton and George W. Bush, told NBC News in August. “This issue remains one of the highest priorities of the U.S. intelligence community … and the White House.”

An excerpt from, “Defending The Arsenal” by Seymour Hersh, New Yorker, November 7, 2009:

High-level coöperation between Islamabad and Washington on the Pakistani nuclear arsenal began at least eight years ago. Former President Musharraf, when I interviewed him in London recently, acknowledged that his government had held extensive discussions with the Bush Administration after the September 11th attacks, and had given State Department nonproliferation experts insight into the command and control of the Pakistani arsenal and its on-site safety and security procedures. Musharraf also confirmed that Pakistan had constructed a huge tunnel system for the transport and storage of nuclear weaponry. “The tunnels are so deep that a nuclear attack will not touch them,” Musharraf told me, with obvious pride. The tunnels would make it impossible for the American intelligence community—“Big Uncle,” as a Pakistani nuclear-weapons expert called it—to monitor the movements of nuclear components by satellite.

Safeguards have been built into the system. Pakistani nuclear doctrine calls for the warheads (containing an enriched radioactive core) and their triggers (sophisticated devices containing highly explosive lenses, detonators, and krytrons) to be stored separately from each other and from their delivery devices (missiles or aircraft). The goal is to insure that no one can launch a warhead—in the heat of a showdown with India, for example—without pausing to put it together. Final authority to order a nuclear strike requires consensus within Pakistan’s ten-member National Command Authority, with the chairman—by statute, President Zardari—casting the deciding vote.

But the safeguards meant to keep a confrontation with India from escalating too quickly could make the arsenal more vulnerable to terrorists. Nuclear-security experts have war-gamed the process and concluded that the triggers and other elements are most exposed when they are being moved and reassembled—at those moments there would be fewer barriers between an outside group and the bomb. A consultant to the intelligence community said that in one war-gamed scenario disaffected members of the Pakistani military could instigate a terrorist attack inside India, and that the ensuing crisis would give them “a chance to pick up bombs and triggers—in the name of protecting the assets from extremists.”

An excerpt from the video below titled, “Denuclearising Pakistan”:

“Rishabh Gulati: Pakistani nuclear weapons and missiles, we know where they came from, they came from China. We know the dates they came, in 86, 87, early 90s. The technology, the designs, the centrifuges, the missiles, all of them were supplied from China. They landed in crates in Karachi.

But here is the irony. The Americans, who knew that China was doing this, had the satellite photographs of the ships delivering the missile equipment and the centrifuges, and other technology, knew about the Chinese designs being shared, only applied grade 2 sanctions on Pakistan. Why? Because Pakistan was an ally.