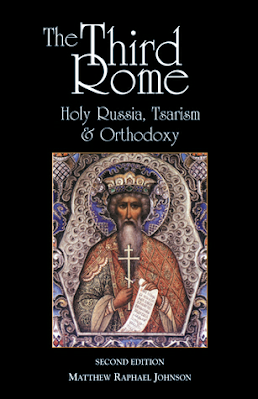 Description of the book:

Academic historians, liberals and communists have been fashioning a fantasy world around Russian history for nearly 100 years, spreading slander and myth about an entire population. Few nations, rulers or peoples have been subject to such merciless attacks as the Russians have. Now, however, all of that has changed. Here’s the first book in English that sets out to defend the history of Tsarist Russia from St. Vladimir to Tsar St. Nicholas II Russia before bloody Bolshevism.

Bio of the author:

Matthew Raphael Johnson is a scholar of Russian Orthodox history and philosophy. His research agenda centers around ethnic nationalism, Eurasianism and the Orthodox tradition as forms of rebellion against globalism. He has recently completed a lengthy book on the history of Ukrainian political thought from Mazepa to the present. Now, he is in the midst of a substantial book on nominalism and its condemnation by Patristic and Platonic authors. His website can be found at www.rusjournal.org.

In 1999, Dr. Johnson completed his doctorate at the University of Nebraska at Lincoln as a recipient of the Clare and Marguerite MacPhee Fellowship. He studied in the History, Political Science and Philosophy departments. He focused on anti-modernist social philosophy and defended his dissertation on Michael Oakeshott’s critique of Positivism. In addition, he focused on Comparative Politics, specifically the Russian and Ukrainian responses to globalization. He is a former professor of both History and Political Science at the University of Nebraska (as a graduate student), Penn State University and Mount St. Mary’s University. Since 1999, he has been the editor (and is presently Senior Researcher) at The Barnes Review, the famed renegade journal of European history.

For 25 years, Dr. Johnson has been a full-time scholar, writer and speaker. The historical, theological, philosophical and political issues detailed here can’t be merely stumbled upon nor taken from any mainstream source. They’re the result of decades of concentrated study in an academic environment. Having been driven from academia as an “eccentric reactionary malcontent,” he depends on the support of his listeners and readers to continue his work. To say the very least, Dr. Johnson’s scholarship is unique, critical and irreplaceable today. It cannot continue without your help and support.

An excerpt from, ““According to God’s Purpose” – The Truth about Tsar Ivan IV, Oligarchy and the Legacy of Medieval Russia” By Matthew Raphael Johnson:

Russia was in the midst of a life and death battle with the Ottoman Empire during much of the era covered here. In 1475, the Ottoman Turks managed to bring the Crimean fragment of the old Horde under its control. Russia in the 15th century was under constant attack from the south, with slaves being the primary prize of these border raids. When the Crimea stood behind the Ottomans, the power and devastation of these raids increased in scale and organization. The huge alliance of Tartar Kazan, Tartar Crimea and the Ottoman Turks then partnered with Italian and Jewish bankers to share the profits of the slave trade. These parties raided southern Russia constantly, removing hundreds of thousands of Slavic slaves, bringing them to the slave-marts of the Black or Caspian Sea. This is the environment that Ivan inherited.

There is no understanding Russian policy at the time without first grasping these facts. The Balkan Slavs and the Russians were at war with a huge network of capital at the end of the Renaissance that has yet to be analyzed in English. The tight bond among immensely wealthy Jews, European elites and Tartar empire-builders would destroy the entire master narrative of official liberal historiography. This alliance, and several others to the north and west, caused Moscow to engage in Herculean efforts to mobilize enough men and resources to keep three or four large enemies at bay simultaneously. This had to be done also with harsh winters, poor soil, difficult travel and internal divisions often goaded by foreigners. This is the source of the Muscovite policy of centralization and service-estate monarchy. It is the historical condition for the Russian mind and defined the Russian national character.

The literature in English usually decries the “lust for power” of the tsars and the “massacre” of helpless Muslims and defenders of Kazan under Ivan IV. The official narrative is uncomfortable with the fact that Russia barely escaped total genocide at this time, and only by the total mobilization of every possible man to create a war machine capable of defending its own borders was Russia ever preserved at all. In the best of times this was a risky gamble. At the worst of times, millions of Russians were exterminated, enslaved and exploited.