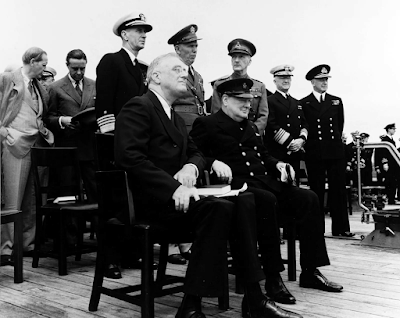 Department of State – Office of The Historian:

Churchill and Roosevelt met on August 9 and 10, 1941 aboard the U.S.S. Augusta in Placentia Bay, Newfoundland, to discuss their respective war aims for the Second World War and to outline a postwar international system. The Charter they drafted included eight “common principles” that the United States and Great Britain would be committed to supporting in the postwar world. Both countries agreed not to seek territorial expansion; to seek the liberalization of international trade; to establish freedom of the seas, and international labor, economic, and welfare standards. Most importantly, both the United States and Great Britain were committed to supporting the restoration of self-governments for all countries that had been occupied during the war and allowing all peoples to choose their own form of government.

While the meeting was successful in drafting these aims, it failed to produce the desired results for either leader. President Roosevelt had hoped that the Charter might encourage the American people to back U.S. intervention in World War II on behalf of the Allies; however, public opinion remained adamantly opposed to such a policy until the Japanese attack on Pearl Harbor in December 1941. Churchill’s primary goal in attending the Atlantic Conference was “to get the Americans into the war.” Barring that, he hoped that the United States would increase its amount of military aid to Great Britain and warn Japan against taking any aggressive actions in the Pacific.

Roosevelt, on the other hand, wanted the British Government to affirm publicly that it was not involved in any secret treaties, particularly ones concerning territorial questions, such as those concluded by the Allies during the First World War concerning the division of enemy territory at war’s end. Roosevelt also wished to arrange the terms by which Great Britain would repay the United States for its Lend Lease assistance. Roosevelt wanted the British to pay compensation by dismantling their system of Imperial Preference, which had been established by the British Government during the Great Depression and was designed to encourage trade within the British Empire by lowering tariff rates between members, while maintaining discriminatory tariff rates against outsiders.

Churchill was extremely disappointed by Roosevelt’s refusal to discuss American entry into the war. Furthermore, Churchill understood that several aspects of the proposed joint declaration might be politically damaging for the Prime Minister. Churchill worried that the abandonment of Imperial Preference would anger the protectionist wing of his Conservative Party. The Americans also proved unwilling to warn Japan too strongly against any future military action against British possessions in Southeast Asia. Finally, both Churchill and many members of his Cabinet were alarmed by the third point of the Charter, which mentions the rights of all peoples to choose their own government. Churchill was concerned that this clause acknowledged the right of colonial subjects to agitate for decolonization, including those in Great Britain’s empire.

The Atlantic Charter was a statement issued on 14 August 1941 that set out American and British goals for the world after the end of World War II. . . .

The charter inspired several other international agreements and events after the war. The dismantling of the British Empire, the formation of NATO, and the General Agreement on Tariffs and Trade all derived from the Atlantic Charter. In 2021, a document titled the “New Atlantic Charter” was signed by United States president Joe Biden and British prime minister Boris Johnson in their first meeting in Cornwall. . .

The acknowledgement that all people had a right to self-determination gave hope to independence leaders in British colonies. Historian Caroline Elkins said, “The independence genie was out of her bottle, and it was the Atlantic Charter that had set her free.”

More than three months before the Japanese attack on Pearl Harbor, the leaders of the United States and Great Britain met aboard ships in Placentia Bay, off the coast of Newfoundland. Codenamed Riviera, the Atlantic Conference was the first time the two men had met as leaders of their respective countries, and resulted in eight ‘common principles’ that the nations would uphold in the post-war world.

First among these was an agreement that neither country would seek to expand its territory in the aftermath of the war, and that they would help to re-establish borders in accordance with the will of the people living in those areas. Most importantly for the direction of future world politics, however, the published Charter was widely accepted by the Allied nations and laid the foundations for the modern United Nations Organisation.