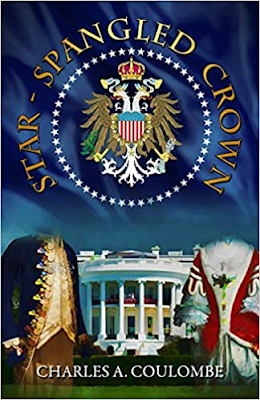 “Star-Spangled Crown: A Simple Guide to the American Monarchy” By Charles Coulombe (2016).

Bio of the author (Source: Amazon):

Charles A. Coulombe is one of North America’s most respected and sought-after commentators on culture, religion, history, and politics. A specialist in the history and government of the Catholic Church, Coulombe’s influence and expertise extend far beyond matters religious. He has written on topics ranging from the history of rum to haunted houses to a history of the United States.

Mr. Coulombe is a social and political commentator of note. In 2005 he provided narration and commentary for ABC News during the funeral of Pope John Paul II and the subsequent election and installation of Pope Benedict XVI. A former journalist, Mr. Coulombe served as a film reviewer and Contributing Editor of the National Catholic Register, during which time he received the Christian Law Institute’s Christ King Journalism Award. Coulombe’s work has appeared in over than 20 journals, including regular columns in Fidelity (Australia), PRAG (London), Monarchy Canada, and Creole Magazine (Louisiana). He has also been a frequent contributor to such publications as Success, Catholic Twin Circle, Gnosis, FATE, and the New Oxford Review.