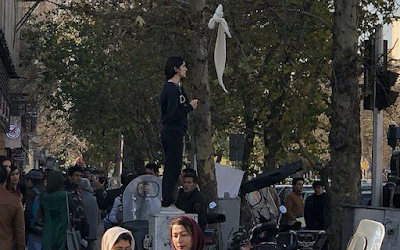 “The world is divided into the House of Islam and the House of War, the Dar al-Islam and the Dar al-harb. The Dar al-Islam is all those lands in which a Muslim government rules and the Holy Law of Islam prevails. Non-Muslims may live there on Muslim sufferance. The outside world, which has not yet been subjugated, is called the “House of War,” and strictly speaking a perpetual state of jihad, of holy war, is imposed by the law. The law also provided that the jihad might be interrupted by truces as and when appropriate. In fact, the periods of peace and war were not vastly different from those which existed between the Christian states of Europe for most of European history.

The law thus divides unbelievers theologically into those who have a book and profess what Islam recognizes as a divine religion and those who do not; politically into dhimmis, those who have accepted the supremacy of the Muslim state and the primacy of the Muslims, and harbis, the denizens of the Dar al-harb, the House of War, who remain outside the Islamic frontier, and with whom therefore there is in principle, a canonically obligatory perpetual state of war until the whole world is either converted or subjugated.” - Bernard Lewis, The Multiple Identities of the Middle East, Schocken Books, New York, 1998, pp.121-122. (Source: Jewish Virtual Library).

How did the first Islamic community emerge? In late antiquity, the Roman Empire had difficulty enforcing its position on the nature of Christ’s divinity, which was rejected by Monophysites in Egypt and Syria, as well as by religious communities in the Sasanid Persian Empire. This presentation locates the origins of the Islamic movement within the dynamics of the religious conflicts that convulsed the Middle East leading up to the 8th century a.d.

Peter von Sivers is an associate professor of history at the University of Utah. Von Sivers’ research focuses on classical Islamic history, medieval and early modern Spain and North Africa, as well as Islamic philosophy and science. He is working on a monograph with the working title Islamic Origins and the Umayyad Empire.