Campbell’s Condensed Tomato Soup is one of America’s most iconic consumer products. First introduced to American consumers by Campbell Soup (NYSE: CPB) in 1898 after having been formulated by John Dorrance the year before, it now ranks as the company’s second-most popular soup, selling 85 million cans each year.

That’s quite an achievement for a 126 year old product. Campbell Soup sells 440 million cans of soup each year, so its sales of tomato soup represent over 19% of its sales. Only the company’s Chicken Noodle soup, introduced in 1934, outsells it with annual sales of more than 250 million cans.

Political Calculations has tracked the price history of Campbell’s Condensed Tomato Soup over the past 126 years because of its remarkable consistency as an identifiable product over time. In fact, if you had a time machine and could travel to nearly any point in time from January 1898 to the present, you could likely find a 10.75 ounce size (Number 1) can of Campbell’s condensed tomato soup stocked for sale in American grocery stores.

That long-running consistency makes Campbell’s Condensed Tomato Soup an ideal product to follow to understand how inflation has affected American consumers through its history. Today, we’re updating our chart visualizing that history from January 1898 through January 2023.

For the latest in our coverage of Campbell’s Tomato Soup prices, follow this link! 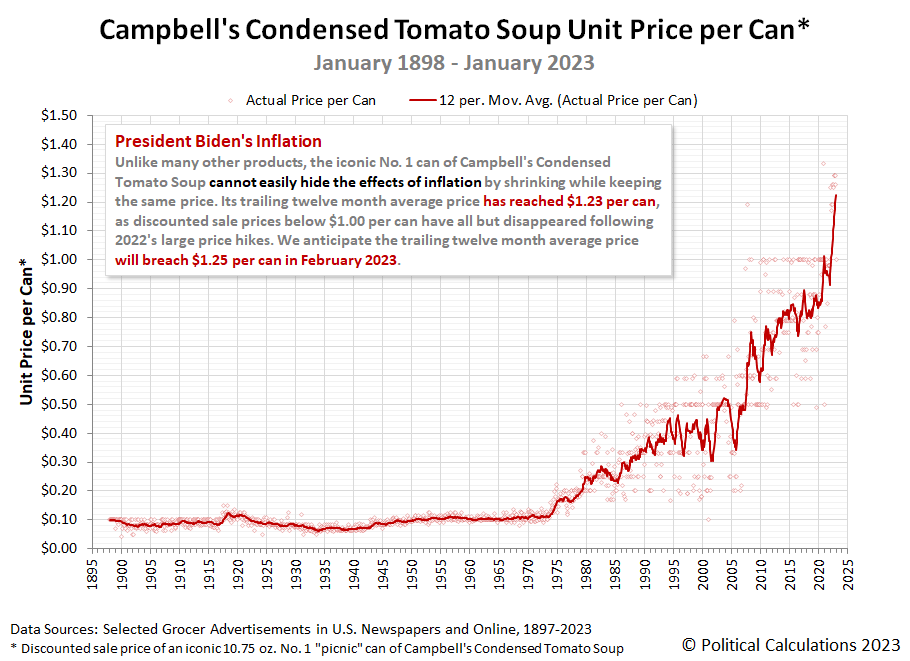 We’ve seen a major change over the past two years with respect to the discounted sale pricing of Campbell’s Condensed Tomato Soup by U.S. retailers. Discounting of its sale price has become both smaller and less frequent. Before March 2021, which marks Month 0 for when President Biden’s inflation got started, it was rare to see the regular sale price of a can of Campbell’s Condensed Tomato Soup above one dollar. In January 2023, that’s now the lowest price at which American consumers can buy a can, where it has been temporarily reduced to that level by Kroger-affiliated grocery stores from their regular sale price of $1.29 per can during the week of 10 January through 17 January 2023.

Here’s the January 2023 update for our periodic sampling of Campbell’s Condensed Tomato Soup sale prices at 10 major U.S. grocery-selling retailers, where we’re indicated the change in price since our previous update in October 2022:

Prices of Campbell’s Condensed Tomato Soup are converging toward a level of $1.25-$1.30 per can. We anticipate the trailing 12 month average price will breach the lower end of that range in February 2023.

When it does, it will cost 12.5 times more than the original price American grocery shoppers paid when Campbell’s began selling their just-invented condensed soup products in 1898. Because its price history now spans more than a full order of magnitude, showing the price history in logarithmic scale gives a better sense of how much and when inflation has affected the prices American consumers pay for a can of Campbell’s Condensed Tomato Soup. 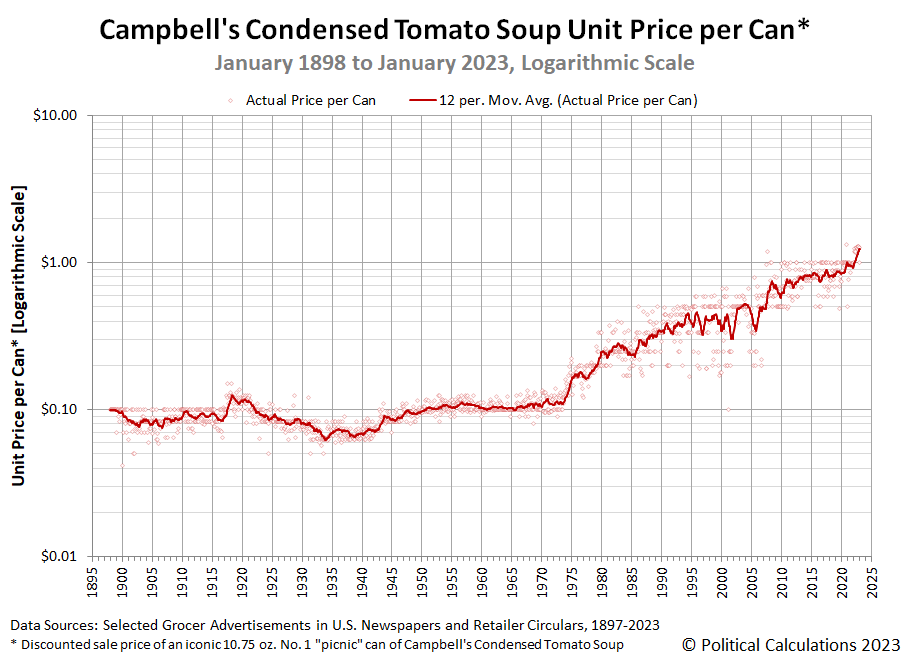 If you’re wondering how Campbell Soup is weathering President Biden’s inflation, here’s an excerpt of Briefing.com’s report on the company’s most recent quarterly results:

Campbell Soup (CPB +5%) started off FY23 on a “mmm…mmm” good note. The food giant reported strong upside with its Q1 (Oct) results for both EPS and revs. What is notable is that this was CPB’s largest EPS beat in the past two years. The company also increased FY23 guidance, although the Q1 upside accounts for much of that. CPB had been dealing with higher inflation for input costs but seems to have finally gotten a handle on it….

In sum, the very strong results were fueled by a combination of inflation-driven pricing and supply chain / productivity improvements. Also, the underlying trend of people cooking more at home seems to be pretty durable. We had concerns that consumers would revert to eating out more but it seems saving money by eating at home is a key trend right now. CPB has been plagued in recent quarters by having to absorb higher food input costs. CPB has announced price increases in the past, but they take time to impact the P&L. However, this Q1 report shows that higher selling prices have finally caught up to offset these costs.

Political Calculations’ analysis of Campbell’s Tomato Soup dates back to 2015! Along the way, we’ve filled in the gaps we had in the historic price data and have explored America’s second-most popular soup from a lot of different angles.