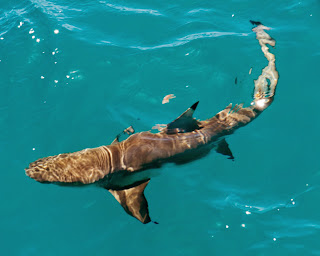 Even if the epidemic estimates provided here  are wrong, they are useful alerting us to what needs close attention.

This post is about a simple useful way to use daily new COVID-19 infection numbers to predict future needs for hospitalisation.

It’s based on looking at what happened in the Sydney and Melbourne Coronavirus outbreaks that started in late 2021.

It might yield useful information about what lies ahead for those cities in coming weeks.

Its based entirely on existing epidemic data and it’s probably accurate for prediction two weeks ahead and may be even longer going forward. 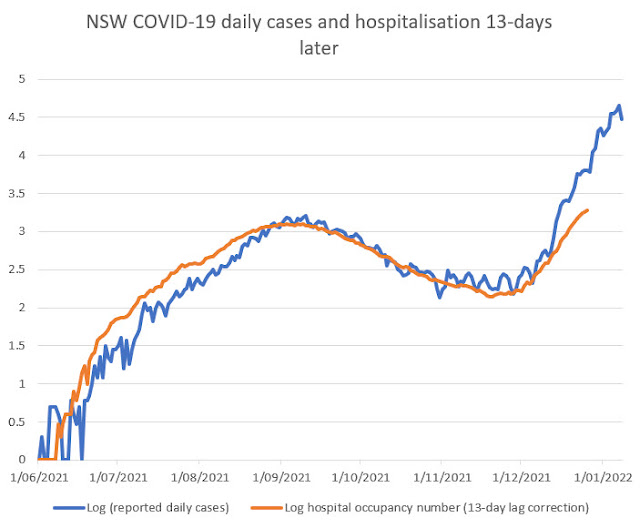 In this graph the logarithm of the reported daily cases and the logarithm of hospital occupation number are plotted against date.
Realistic plausible mechanisms are needed for successful prediction.

The value for the daily cases is plotted (blue curve) against the actual day in which those tests through were reported, whereas the value for hospital numbers (orange curve) is that occurring 13 days later, the time at which any infected people in those daily cases who went to hospital will very likely be preparing to leave hospital, hopefully recovered recovered. This is a plausible simplified mechanism justifying the usefulness of the calculations that follow.

In any case this correction makes the blue and orange curves overlap closely. So the extent to which daily cases predicts hospital occupation 13 days later can be assessed visually. It is fairly good overlap although there is a small gap between the curves both early on and at the end of the period.

Here is a similar curve for the Victorian COVID-19 outbreak that occurred at the similar time of the year: 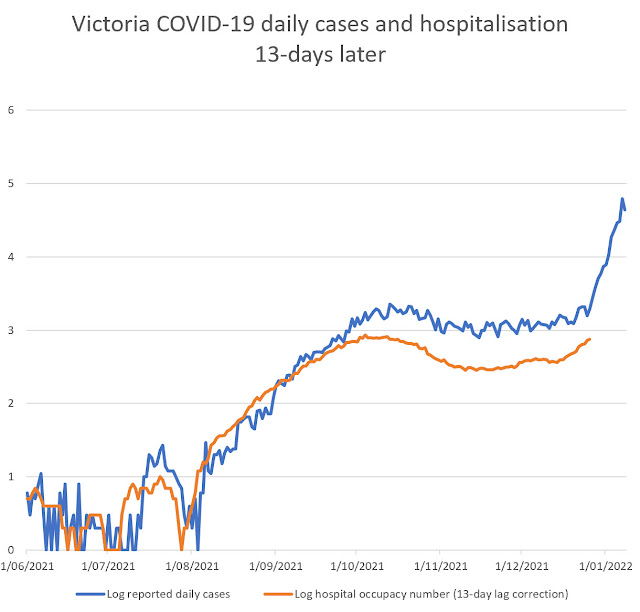 A similar pattern is seen to that in New South Wales, even though the timing of the Victorian cases differs somewhat from the New South Wales case curve.

One feature that the Pundit noticed is that the orange curves cross the blue curves at a similar date in both epidemics. The Victorian daily case numbers correlate strongly with hospitalisation numbers over the time interval examined. (Previous posts that this blog have documented more extensive correlation over the full period of the Victorian Covid 19 epidemic.)

Put together, these correlations suggest that daily case numbers provide a very good prediction of hospital bed occupation by COVID patients, but not perfectly, because there is a need for a small correction if the curves are to overlap more closely.

From these log plots the difference between these two curve (that the Pundit calls case to hospital ratio index) can be calculated easily for each day and this shows in effect what correction is needed to make daily cases and accurate predictor of future hospitalisation:

The index is calculated as the difference between logarithm of daily cases and logarithm of hospital numbers adjusted 13 days for lag.

As it is a difference of logarithms, it is related to a ratio of new cases per hospital bed numbers.

A larger value of the case to hospital ratio index means less severe disease impact in the epidemic and a lower value means greater hospital load. The trajectory of the index shows periods late in the epidemic where the index was constant. This means it can be is the applied as a correction to give accurate prediction. Ignoring noise when case numbers below, there is a consistent rise in the index over time most likely detecting the effect of vaccination and booster programs. The New South Wales index rises from a lower value indicating that at the start of the Sydney outbreak disease severity was very bad.

At at the end of this period both states have the same index value (0.50). This means that hospital numbers were daily cases 13 days earlier divided by 3.16. (That a property of logarithms for calculating purposes

It seems fair to suppose (that for projecting trends into the future) that this disease severity index will remain approximately constant in the near future, given that it has had a steady value for several months in the existing records in November and December (see graph above).

Using this division process of cases/3.16 (or its equivalent subtraction of logarithm values) we can project forward expected hospitalisation levels over the next 2 weeks as follows: 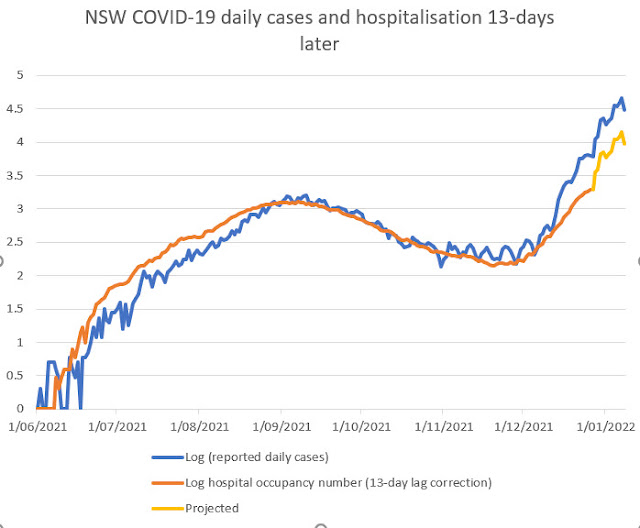 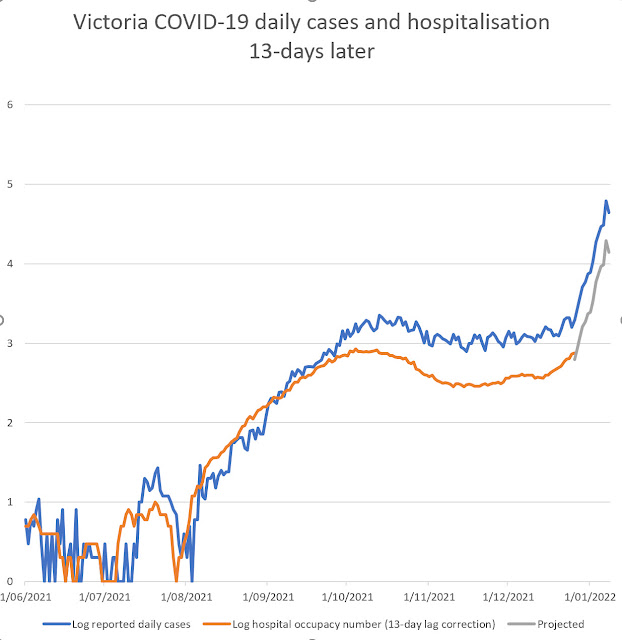 Both these projections indicate NSW and Victoria could reach 10000 hospitalisations in two weeks time in both states.

Such a situation would severely stress the medical systems of both states.

The estimate may exceed the level of hospitalisation cases that the New South Wales Government is anticipating.

These bad severity signals  may be overestimates, as the Case to hospital ratio index may continue to increase but fortunately this correction can be easily picked up if we get accurate medical data over the next week.

Even if new daily case numbers are inaccurate, any departure from predicted hospital numbers shown on these graphs will signal welcome softening in severity of disease that is expected with the Omicron variant, and which may already be showing up in the NSW epidemic graphs as a jump in the Case to hospital ratio index. Hopefully we may see a similar jump in Victoria.

In short, even if these projections are wrong, they are useful alerts on what needs close attention.