The Pathetic Vileness of the Haters and Baiters

There are dark forces in human hearts that we simply cannot allow to be released. Whether the objects of their hatred are defined by faith or racial or ethnographic identity, we have surely learned enough lessons by now of the dangers in pretending that their abhorrent views are in any wise acceptable. Corbyn has sheltered and succoured the most vile bigots and anti-semites, repugnant individuals who pollute his party. As a reminder of how unfit he is – and all like him, the Muslim-baiters, the race haters, who either commit or allow those in their party to commit, these repulsive hatreds, I re-publish a post I made a year ago, on the 80th anniversary of Kristallnacht -

November 9th, 2018
A pane of window glass is an odd thing. Just 4mm thick, and so fragile that a child’s ball may shatter it, in our minds it is as much of a bulwark against the elements, against the chaos of the street, against the bad outside as nine inches of brick and mortar. Anyone who has had a broken front window pane will know the sudden vulnerability, the sense of unprotectedness, the anxiety and the naked exposure of that void. Until mended, we can’t sleep. We imagine dark forms, of burglars, deviants and suchlike attracted like moths to the boarded gape – blind to the reason that the piece of plywood covering the hole is many times stronger than the thin, weak pane it replaces.

The boundary, the constraint, the separation between discriminatory treatment, between scowls and insults flung in the street and on the trams to physical battery, to rape and murder, to violence and robbery and to organised genocide was just as thin and fragile as a sheet of glass. Eighty years ago it was smashed and the first thirty thousand of Germany’s Jews were rounded up for the concentration camps, to be killed in an ad-hoc, haphazard fashion, from starvation, lack of care, overwork and shooting. It was to be another thirty-eight months before the Germans agreed the designer death factories at Wannsee – Vorsprung durch Technik – but already the fate of Europe’s Jews was effectively decided.

I was in Villach yesterday, enjoying a beer on the broad, elongated space that stretches up the hill from the Drau to the church, paved in the same red catshead cobbles as a century ago, and called Adolf-Hitler-Platz until the British occupation force changed its name in 1946. The Christmas tree was already up, the size of the tree in Trafalgar Square, and carpenters were building the Christmas village, sturdy huts and braziers soon to be filled with the scent of burning pine, Glühwein and hot Leberkäse. As I write I can’t actually remember what the space is called today – after having seen all the photos from March 1938, such as that below, it is forever Adolf-Hitler-Platz in my mind. Among this crowd, I wonder, were the Jews of Villach watching the procession? Still at that time with faith in the strength of their windows to protect them from rape, brutality and death? 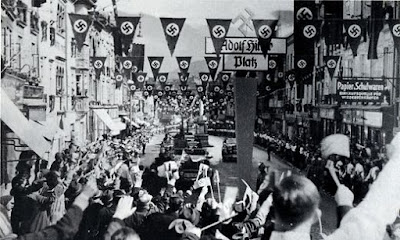 Source: http://raedwald.blogspot.com/2019/11/the-pathetic-vileness-of-haters-and.html
BeforeItsNews Announcements
Step 1: Get the Telegram App & Get Stories Direct to Your Phone or Computer Without Censorship! Get the Telegram App in the App Store or at
https://telegram.org/